O’Keeffe was the first American artist to practice pure abstraction, and she remained true to her vision during her seven-decade career, always finding the abstract in nature and painting images with subtle nuances of color, shape, and light. During her early career, she produced a series of charcoal drawings that she mailed to a friend in New York City. The friend showed them to the prominent photographer-turned-gallery owner Alfred Stieglitz, who was the first to exhibit her work in 1916. Eventually, Stieglitz would become O’Keeffe’s husband. By the mid-1920s, she was one of America’s most important and successful artists.

In 1929, O’Keeffe travelled to Taos at the invitation of friends. Inspired by the stark landscape, the distinct indigenous art, and the unique style of adobe architecture, her artwork took a new direction. For two decades, she spent part of every year living and working in New Mexico, and during one such visit she heard about Ghost Ranch. But it wasn’t until 1934 that she finally visited and was dismayed to learn it was a dude ranch owned by Arthur Pack and his wife Carol Stanley. However, they had lodgings for her and she spent the night in Ghost House. The “night” turned into an entire summer, and so a pattern was set, one she followed for years. A loner by nature, she wanted to be isolated from the main house, so Pack rented her his own residence, Rancho de los Burros.

One spring O’Keeffe arrived and found the house rented. When she confronted Pack as to why there were people in her house, he pointed out that it wasn’t hers, so she pressured him into selling it to her, along with seven acres. But she wanted a garden and a winter home in addition to the one on the ranch, which she considered only a summer place, so she bought three acres and an adobe in Abiquiú. In 1949, three years after Stieglitz’s death, she left New York and made Abiquiú her permanent home. 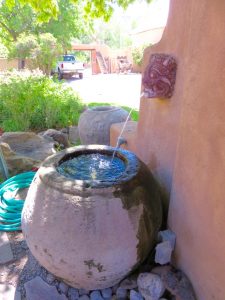 In 1955, Arthur and his second wife Phoebe donated Ghost Ranch to the Presbyterian church, much to the shock of O’Keeffe. Now her precious privacy would be gone. The new owners gave their famous neighbor her privacy, allaying O’Keeffe’s fears, and the relationship with the new owners improved to the point where she decided to stay. But she remained reclusive to the end, saying, “I find people very difficult.”

Suffering from macular degeneration, O’Keeffe was discouraged by her failing vision, but her will to create never diminished. She painted her last unassisted painting in 1972. Late in life and virtually blind, she enlisted the help of several assistants to enable her to paint, drawing on her memory and vivid imagination, and at age ninety was still painting. She died in 1986 at ninety-eight in Santa Fe, New Mexico. A museum dedicated to her artistic legacy was founded there in 1997.

Of the flat-topped mountain Pedernal, a favorite subject of hers, she said, “It’s my private mountain. God told me if I painted it often enough I could have it.” And well known is the Ghost Ranch logo. When 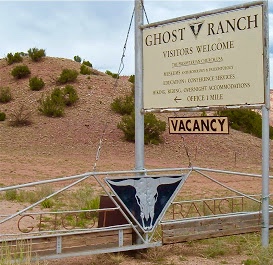 O’Keeffe set out to find the ranch for the first time, she was told to watch for the skull on the fence post because “it marks the turn-off to the ranch.” She made a drawing of the ox skull and gave it to Pack, and he adapted the artwork for the Ghost Ranch logo.In 1942, in a letter to painter Arthur Dove, O’Keeffe wrote: “I wish you could see what I see out the window—the earth pink and yellow cliffs to the north—the full pale moon about to go down in an early morning lavender sky, pink and purple hills in front and the scrubby fine dull green cedars—and a feeling of much space—It is a very beautiful world.”

Mesa
In Spanish, the word means “table.” A mesa is an elevated area of land with a flat top and steep slides. Mesas rise sharply above the surrounding landscape, and the top of the hill is usually capped by a rock formation. Photo: Abiquiú, New Mexico.

END_OF_DOCUMENT_TOKEN_TO_BE_REPLACED

As far back as 2014, when Fiona Raven and I began working on the cover design for Brainwash, I entertained the idea of replacing the iStock images of Darcy and Bullet with artist-drawn ones, with the notion that one day I might decide to trademark them. END_OF_DOCUMENT_TOKEN_TO_BE_REPLACED