As far back as 2014, when Fiona Raven and I began working on the cover design for Brainwash, I entertained the idea of replacing the iStock images of Darcy and Bullet with artist-drawn ones, with the notion that one day I might decide to trademark them.

In late 2015, I asked fellow writers who were familiar with my series what they thought Darcy looked like. All six had diverse opinions; two even said she was blonde with blue eyes, even though I had described her as olive skinned and dark haired with green eyes. I decided then that since each reader had his or her own concept of what Darcy looked like, I would depict her either in silhouette or in profile, but not in a frontal view.

In March 2016, after receiving a glowing recommendation from a fellow giant schnauzer owner about Nancy Hilgert, I e-mailed her and commissioned her to do portraits of Shotz and Kai. I inquired about whether or not she drew humans, as I wanted someone to draw Darcy and Bullet in graphite with a subtle use of color here and there. She replied that she didn’t typically do humans, but “Darcy and Bullet had her attention!” And who better to understand the bond between a woman and her giant schnauzer than a woman who owns, and has owned, giants. 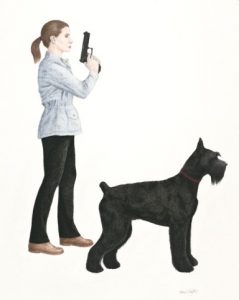 Many e-mails and several telephone conversations later, we had defined and refined what the images should look like and Nancy set to work. When the drawings and digital images arrived, I couldn’t have been more pleased. Soon thereafter, I asked Nancy to draw Taos Mountain, as in the shadow of this sacred landmark Brainwash began. Not only is Nancy a talented artist, but she is also fun to work with and has become a friend. Treat yourself by taking a tour of her website to see the incredible detail work she puts into her art: nancyhilgertfineart.com.

← Bullet A Southwest Glossary: Architectural Terms A to L →