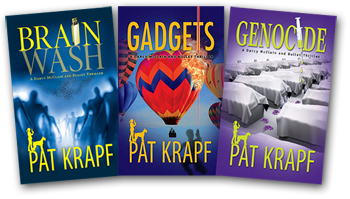 Pat Krapf is the author of the acclaimed Darcy McClain and Bullet Thriller Series. There are currently two books available, one coming out in the spring, and several more in the works for readers to enjoy. She is an avid traveler, and many of the settings for her novels are inspired by places where she has spent time. A prolific blogger on her Hardwired blog, Pat writes numerous posts about her travels as well as her writing process.

NEW! The first book in the series, Brainwash, is now available as an audiobook!

A Darcy McClain and Bullet Thriller

Sean Ireland, the first gay presidential candidate in US history, is guaranteed the election—until he's found dead at the Palace of Fine Arts in San Francisco.

Stunned by her friend's murder, private investigator Darcy McClain is determined to hunt down Sean's killer. In shock, she returns home to find someone has broken into her home, assaulted her sister, and stolen her giant schnauzer Bullet.

While frantically searching for Bullet, Darcy's worst fears are realized. She finds a tranquilizer dart, shot from a crossbow, lying in her backyard. Only one person she knows uses such a weapon—Solis, a rogue CIA agent who years earlier tried to kill Darcy.

Read more about the first two books in the series