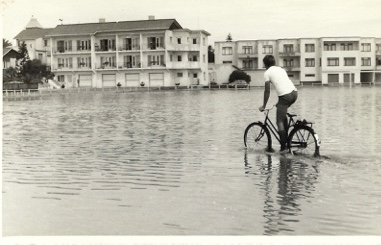 Toward the end of April, I had planned to launch a series of posts about Texas, as CLON-X is set in the Lone Star State. But life interfered with COVID-19, and stay-at-home orders prevented any nonessential trips, such as our plans to visit Big Bend or even closer to home—Dallas.

So last week, I was pretty sure I had run out of material for future blog posts, and was content to focus on my current thriller with a working title of OM, as well as constructing the backbone for our nonfiction book about how a giant schnauzer transformed the Darcy McClain and Bullet Thriller Series.

Then, I stumbled upon a box of old family albums collecting dust in our garage, the last holdouts from my parents belongings after my mother passed away this year. Unfortunately, most of the photos have faded to a blurry yellow patina, and in others, you can barely recognize the people, unless you are very familiar with the subjects.

During my photo album search, I came upon a series of black-and-whites of the 1974 Swakopmund flood and wanted to share them with you. Darcy lived in Swakopmund as a youngster and that’s the connection between the thriller series and this post. In book six, her past will resurface when an old friend contacts her, drawing her into a dangerous game of cat and mouse. 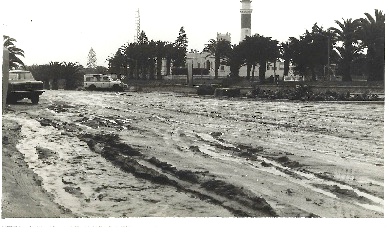 After graduating from the University of Oregon in 1974, I made the long trip from Eugene, Oregon to Swakopmund, South West Africa—now Namibia—to visit my parents. The company my father worked for at the time had contracted with NamWater to build southern Africa’s first large seawater desalination plant to supply a nearby uranium mine and the city of Swakopmund with water.

Namibia’s climate is hot and dry with erratic rainfall, and their two rainy seasons are in the summer. The Namib—Nama for “vast”—is a coastal desert that extends for 1,200 miles along the South Atlantic coast of Southern Africa and is second in aridity only to the Sahara.

Despite being a mineral-rich region—diamonds, silver, tungsten, lead, zinc, tin, uranium, and copper—water is more precious. Only the Cunene River, which is shared with Angola, provides drinking water for four northern regions of Namibia. 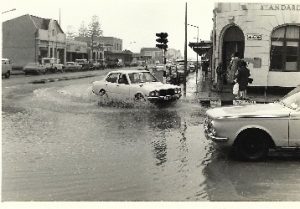 While survival can be a struggle in the Namib, this surreal landscape of towering, windswept, copper-red sand dunes that undulate to a cobalt blue ocean, blurring the line between water and sky, captivated me the moment I stepped off the puddle jumper from Windhoek, Namibia’s capital.

Flash flooding in the desert is common, but I had no idea I would be in Swakop to experience the sight firsthand: Mother Nature in all her force. While living in Africa, I also experienced my most severe earthquake—the Ceres quake in the town of Wellington, South Africa.