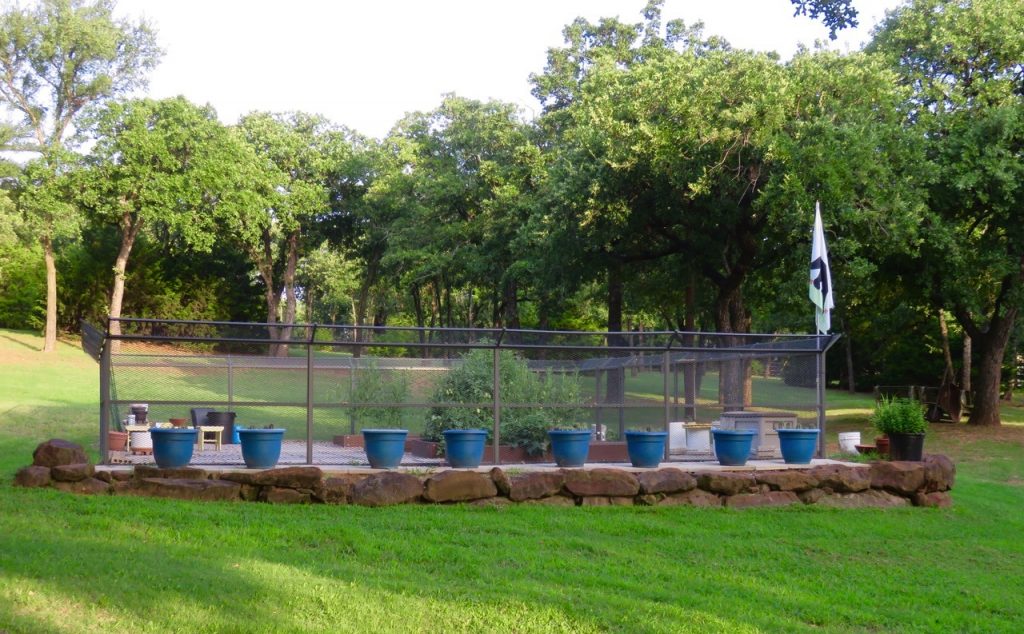 First an update to last week’s post: Right on the heels of Lynette joining the Garden Gals, we had a new recruit to our “veggie pact.” Mary doesn’t grow anything, but she loves to cook. Provide her with cilantro, garlic, and tomatoes, and in exchange she’ll make homemade tamales and enchiladas—preorder and state how many—within reason of course.

In 2007 I began designing my permanent vegetable garden for our new home. I knew I needed a critter-proof enclosure as the raccoons, possums, and skunks were ready to do battle with the new residents that were invading their community. Hey, I don’t blame them. I’m all for sharing, but I don’t believe the word is in their vocabulary. I had learned from experience that when a raccoon wants something, he will find a way to get it.

I pretested my theory by having a trashcan pen built first—concrete slab, welded steel mesh sides, and a steel mesh top. That evening I deposited two bags of trash in one can and emptied our house recycle into the city-provided container. The next morning I found trash littering our driveway, the recycle bin overturned, and there were two, large raccoons licking the rinsed cream cheese and yoghurt containers.

Did I chase them off? Heck no! They were ready to take me on to keep their prizes. Instead, I did the smart thing. I retreated and they made off with their breakfast. I can only assume that they unlatched the door to get in, so I installed a padlock. Problem solved.

With the raccoon incident in mind, I designed a 30 x 30 foot enclosure to house my vegetable garden. I chose a southeast exposure, the only section of yard that wasn’t heavily wooded. Since it was on a slope, I had the area graded to level out the incline, and a rock retaining wall installed on the east side to hold the soil in place. For the wall, I used boulders from our own property with the rocks removed from the land during our house construction.

Next, the enclosure itself. The walls would be welded steel mesh like the trash enclosure, but at the five-foot height they would jut out at a 45 degree angle, preventing most critters from climbing over. As for burrowing underneath, I had two feet of welded steel mesh buried underground during the installation. It was welded to the base supports. See diagrams. Has it been effective? The occasional trespassers are birds, but they are easier to deter than a hungry raccoon or squirrel.

My father once told me, “If you learn something beneficial, pass it along. Don’t keep it to yourself.” So here are a couple of tips I’ve learned. Before our new neighbors planted a half-acre garden I warned them about the raccoons, especially when he proudly stated that he planned to grow melons.

After his first season, he admitted that I was dead on. The moment a melon starts to ripen it’s like broadcasting its presence to the entire four-legged world. He fenced the garden. No luck. He electrified the fence. No luck. Unfortunately, three growing seasons later, they gave up gardening altogether.

As news of our pact circulated and our circle of gardeners grew to four, I was faced with a slight dilemma. After spending years of canning, drying, and freezing vegetables in the hottest months in Texas, I decided to scale back on the varieties and the number of plants. Preserving a large harvest no longer held the appeal it once did at a younger age. Also, a natural event coincided with my decision. My raised beds were rotting and the time had come to replace them.

In lieu of planting sixteen beds, I cut the total to eight as I had a new focus—growing native trees and shrubs. If the pact increases then those eight beds might’ve come in handy. But for now I’ll put that thought on the back burner.

Years ago, I followed in my father’s footsteps and started growing trees. I focused on eastern red cedars which are native to Texas. Contrary to its name, the tree is not a cedar, but is in the juniper family— botanical name (Juniperus virginiana). True cedars belong to the Cedrus genus. I’ve had good success growing this native, having planted well over two dozen trees in four years. I’ve heard they are easy to propagate from seed, but I’ve grown all of mine from one-inch seedlings plucked from my flowerbeds during my spring weeding.

I transplant them into pots and nurture them from there. When they reach a foot in height, I plant them into the yard. In the past, I’ve waited until they were two-feet tall, but to survive in dry climates, junipers have a stout taproot as well as an extensive lateral root system. The sooner you get them into the ground and let them establish, the easier it will be on the person digging the hole. To protect them from the lawn mowers, I built cages from no climb horse fencing and I paint them bright orange. It protects the tree until it is clearly visible and I can use it to support the sapling as it grows, ensuring it remains erect.

I noticed that the NC State Extension Publications had diagrams on how to build a wildlife sanctuary to keep your critters in. I am reposting the diagrams as they are similar to the ones I used to keep wild critters out. Learn more:  https://content.ces.ncsu.edu/extension-gardener-handbook/20-wildlife

Also note: no-climb horse fencing only applies to humans. I’ve seen any number of critters climb over the fence and walk across the top.

In addition, these are not the real names of the neighbors participating in the vegetable pact.