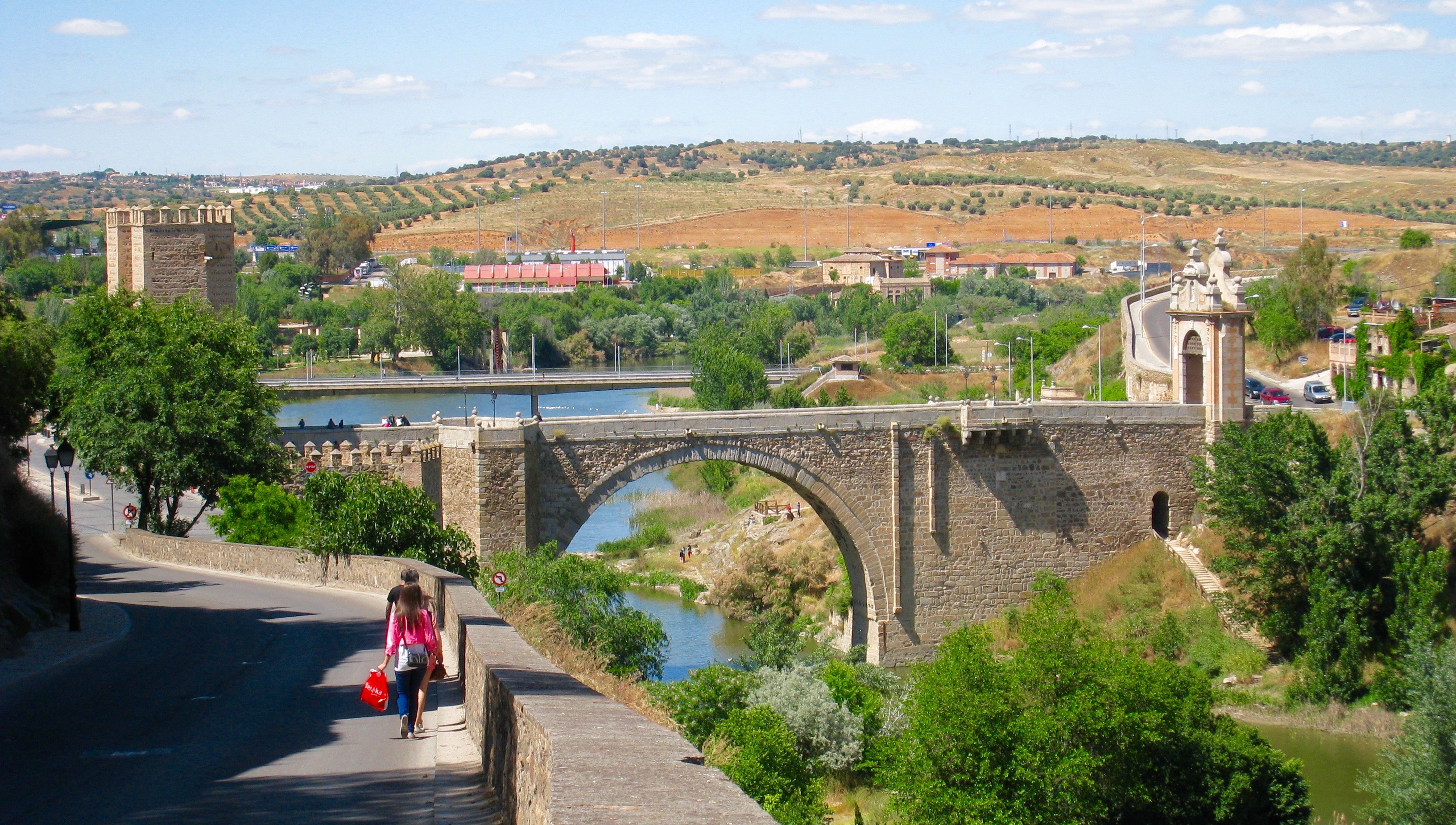 Last week we visited Alcázar. Picking up from there, we left the castle and made our way to Toledo’s cathedral. The formal name of the French Gothic church is Santa Iglesia Catedral Primada de Toledo. Construction on the white limestone structure began in 1227 on the site of a former mosque. The opulent, shimmering, gold interior is jaw-dropping: it’s laden with elaborate wrought iron work, lavish wood carvings, 750 five-hundred-year-old stained glass windows, and a spectacular gold high altar, not to mention eighteen El Greco masterpieces. 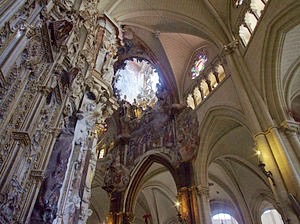 All around me tourists uttered the same word: “Wow.” The initial design had five naves and eighty-eight columns and measured 390 feet long by 196 feet wide. Over the centuries additions have been made to the original building. In the fourteenth century San Blas Chapel and a cloister were added, and construction on the towering altar in the main chapel began. It took six years to complete, and many famous sculptors worked on the five-story gold filigree structure. During the fifteenth century vaults were added and another chapel, for a total of seven today. But the most moving and stunning feature in the cathedral was El Transparente, a Baroque altarpiece illuminated by a large skylight cut high in the ambulatory behind the high altar. A second hole cut into the back of the altarpiece itself allows sunlight to strike the tabernacle. The illumination is dazzling when the sun shines from the east, giving the impression that the whole altar is rising to heaven. 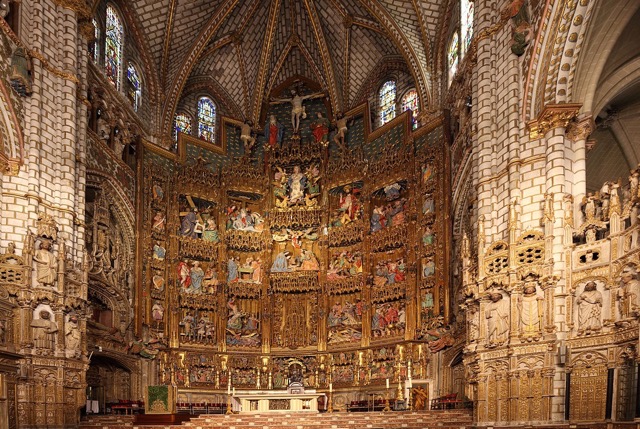 We stepped outside to blinding sunlight and made our way through the picturesque narrow streets to Sinagoga de Santa Maria la Blanca, the synagogue of “St. Mary the White,” The 1203 house of worship was designed and decorated by Mudéjar architects. The architectural style was a synthesis of techniques resulting from Muslim and Christian cultures living side by side and emerged during the twelfth century. The dominant characteristics are elaborate tile work, brickwork, wood and plaster carvings, and ornamental metals. To dress up walls and floors, Mudéjar architects used complicated tile patterns. Long after the Muslims were no longer employed as builders in Spain, their distinctive elements continued to be incorporated into Spanish architecture. Inside the synagogue the Moorish influence is obvious in lovely white horseshoe arches, capitals carved with vegetal motifs, and the contrasting dark red floors with decorative tiles. (In architecture, a capital is a “head,” the topmost section of a column or pilaster.) The synagogue has been used as a carpenter’s workshop, a store, a barracks, and a refuge for former prostitutes. Beautifully restored, today it is a museum.

Our next stop was El Tránsito Synagogue, a private family synagogue known for its rich polychrome stucco work, multi-foil arches, and a massive Mudéjar paneled ceiling with Arabic inscriptions intertwined in the floral patterns of the stucco panels. After the expulsion of the Jews from Toledo in 1492, the building was converted into a church. 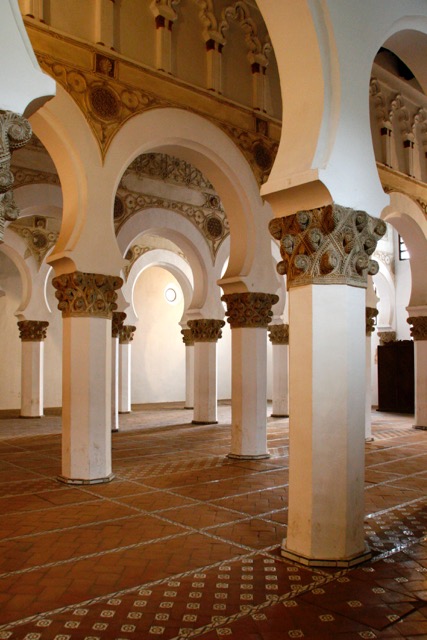 We lunched on tapas at Mesón La Orza before we set out for the El Greco Museum, only to find it closed. We had no information about whether or not it would open that day, so we walked on to the Monasterio de San Juan de Los Reyes. The structure was built by Catholic monarchs King Ferdinand II and Queen Isabella I to commemorate their victory over the army of Alfonso V of Portugal in 1476, and they also planned to house their mausoleum there. However, after the reconquest of Granada in 1492, the Catholic monarchs chose to be buried in Capilla Real in Granada. The two-story Gothic monastery with its Plateresque stonework, a larch wood ceiling painted with the motifs and the coats of arms of the monarchs, and the peaceful cloister and garden were definitely worth the visit. I would have liked to linger a bit longer, but we had two more stops to make and had to hurry along to catch a train back to Madrid. But before we left, Dave had to show me something on the exterior of the monastery. Chains hung from on high, the remnants of leg irons worn by the Christians imprisoned by the Muslims. During the reconquest, the prisoners were freed, and the chains were hung on the monastery in 1494 to symbolize the triumph of Christianity. 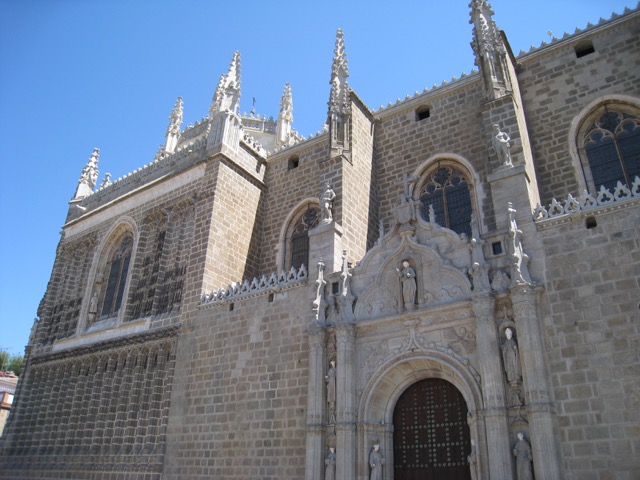 With only two hours left for sightseeing and still much to see, we both agreed we should have considered at least a two-day stay in Toledo and noted this for a future visit. Not rushing but not dawdling either, we headed toward the Puente de San Martín. Constructed in the late fourteenth century to provide access to the old town from the west, the bridge has five arches, heavy fortification with towers, and an impressive span of just over 130 feet. At that time, very few bridges in the world had reached that length. It complements the older Puente de Alcántara, which links the city to the east.

Our next stop was Puerta de Bisagra, the main gate to the old city of Toledo, a majestic stone gate built in the tenth century in the time of the taifa of Toledo. The taifa was a Muslim medieval kingdom located in central Spain in 1035 that endured until the Christian conquest in 1085. The gateway is actually two gates, the old one built by the Moors between the sixth and seventh centuries, and a new gate built in the sixteenth century. After photo snapping and a time check, we pressed on to our next destination.

Mezquita del Cristo de la Luz dates back to 999 and was built as a mosque known as Bab al-Mardum. It is the only surviving mosque of ten that once stood in Toledo. It has a square footprint that measures roughly twenty-six by twenty-nine feet. The facade is brick and decorated with a series of arches. The interior has open brick latticework and an arcade of blind horseshoe arches that support nine ribbed vaults, all of which have a unique geometric design. In 1186 when the mosque was converted into a chapel, a transept and a Mudéjar-style apse were added. The chapel derives its name from legend. When King Alfonso VI rode into Toledo in victory in 1085, he discovered that a candle, which had burned continuously behind the brick masonry for three and a half centuries of Muslim rule, was illuminating a statue of Christ concealed within the brick wall to prevent profanation. 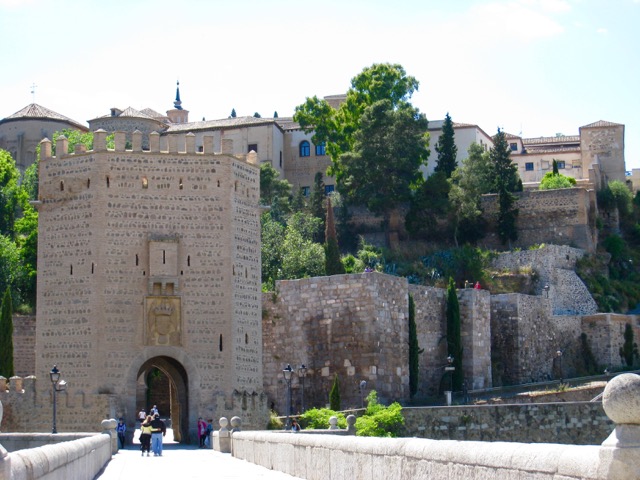 Mindful of the time, Dave and I threaded our way through the quaint Toledo streets toward the Puente de Alcántara, an arched stone bridge built between 104 and 106 to span the Tagus River. So far we had avoided getting lost in Toledo, but that soon changed. The street we were on came to an abrupt end, and we had to loop back up the steep incline. Along our way a British couple stopped us to ask for directions. We really couldn’t help them, except to say that this street was not the way to the bridge. They too were in a hurry to reach the train station. “So let’s team up and rally on,” they said, and that’s precisely what we did until we bumped into a local. She gave us excellent directions, but not ones we wanted to hear. We had to hike another steep hill. We crested the rise only to discover that the bridge was nowhere in sight. We still had a ways to go. Eventually, the bridge came into view, and the four of us let out loud sighs. We finally entered the station and queued up. Neither we nor the British couple had purchased return tickets, and we were darn lucky to get the last four seats on the 5:00 p.m. train. The next available departure with any empty seats was at 9:00 p.m.

We arrived back at the Westin in time to shower and change for dinner at Lieu Restaurante for what would be a fabulous meal prepared by chef Daniele Scelza. The restaurant offered two prix fixe menus. I ordered one and Dave the other, along with the wine pairings. The meal began with test-tube cocktails and chorizo madeleines for two—gratis—followed by a transparent tomato ravioli with parmesan cream and basil for me, and for Dave a zucchini carpaccio: paper-thin slices of zucchini with a tangy citrus and herb drizzle. Next, I had an aerated gazpacho and Dave a potato-bacon pie with escargot in a beef sauce. So far everything had been superb, and we couldn’t wait for our mains—Dave had the lamb saddle with creamed sweet potatoes, and I chose black cod with olive oil, basil, tomato confit, and pumpkin puree. By the time dessert arrived, I had run out of superlatives. We shared an order of creamy chocolate with olive oil, brownies, and tiles of red wine granita; and an order of berries, cassis sorbet, and ginger chips, topped with a champagne foam. Both were palate-pleasing delights. A meal to remember, but unfortunately, from what I’ve read on the Internet, the restaurant has permanently closed.