Our last morning in Suances broke sunny and clear. After breakfast, we drove into town and walked along the beach until ten o’clock, when we returned to the Albatros to check out. We dumped our bags in the hatch of our Volvo SUV and motored to Santander Airport to catch a flight to Madrid. The AVIS agent who had rented the car to us three days prior, a somewhat surly gentleman, asked, “Well, did you find Suances?” He deliberately mispronounced the town’s name exactly the way we had when we picked up the car and asked for directions. Before we left the agency, he once again mispronounced it. We thanked him again for the correction and walked away, leaving him to mumble something under his breath. 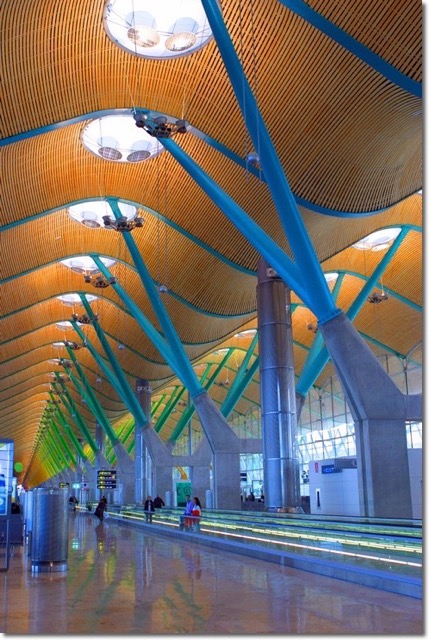 The nonstop Iberia flight flew down the center of Spain. With no ocean views and nothing much to see, we napped away the short, one-hour trip. At MAD, Madrid-Barajas Airport, I persuaded Dave to wander through Terminal 4 so I could take pictures. The Madrid airport is number two of ten on a list of the most beautiful and amazing airports in the world, second only to Beijing International Airport. Designed by Richard Rogers, the airport features colorful pylons supporting an undulating bamboo-lined roof, the rainbow of colors eye-catching and a work of art unto itself. After my photo shoot, we caught a cab to the Westin Palace Hotel and retired to our room to freshen up for dinner and a flamenco show at the El Corral de la Morería. We’d heard it was the best show in Madrid, so we were looking forward to the experience.

The venue was small, with the stage set off to the right of the dining area, rather than in the center of the room. In some sections of the restaurant, pillars block your view, so book well in advance for the best seating. Also take into consideration that your back might be to the stage, forcing you to crane your neck for the hour-long show. Dave had booked eight months in advance, so we had a table close to the stage and we both faced the performers. When our dinners arrived, every seat had been taken, proof of the show’s popularity. 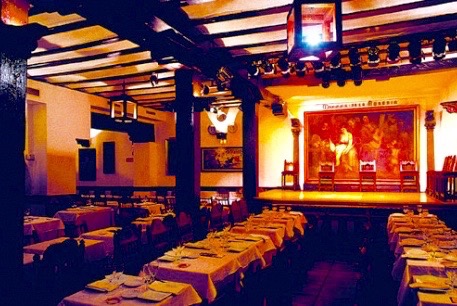 The performance was fast and furious, passionate and tender, and the tension palpable. The male dancer, Jesús Fernández, was excellent, but his female partner, Belén López, outshone him—quite an accomplishment. The steady thump, thump, thump of their steps became hypnotic, and we felt as though they were drumming the music into our souls—an incredible and contagious performance. “Bravo!” the audience shouted, and they clapped as the dance wound down to an end. As we left the restaurant, I stopped to peruse the celebrity photos hanging on the walls: Sandra Bullock, Marlon Brando, Richard Gere, and Burt Lancaster to name a few.

I was barely awake the next morning when Dave offered to go around the corner to Starbucks and buy lattes. He returned with an interesting story to tell. The night before, we had taken a cab from the hotel to the flamenco show. The taxi driver said the trip cost twenty euros. Dave handed him the twenty, and he gave Dave a ten-euro note. When he questioned the cab driver, the man said, “Ten euros.” We asked if he was sure, and he repeated, “Ten euros.” At Starbucks, Dave dug out the ten to pay for the drinks. The man behind the counter returned the note. Surely, two lattes couldn’t cost more than ten euros? thought Dave. The cashier reached over the counter, took the note, held it up with both hands, and repeated, “No good.” Counterfeit? The cashier smiled, nodded, and said, “Sí. Counterfeit.” He took a real ten-euro note from the cash register and showed Dave the difference. Back at the hotel, Dave stopped at the concierge desk in our hotel to report the incident. He certainly didn’t expect the hotel to do anything, as there wasn’t much they could do, but he gave the note to hotel security to be sure we didn’t accidentally pass it to anyone else. The last thing we wanted was to spend time in a Spanish jail for paying with counterfeit money. 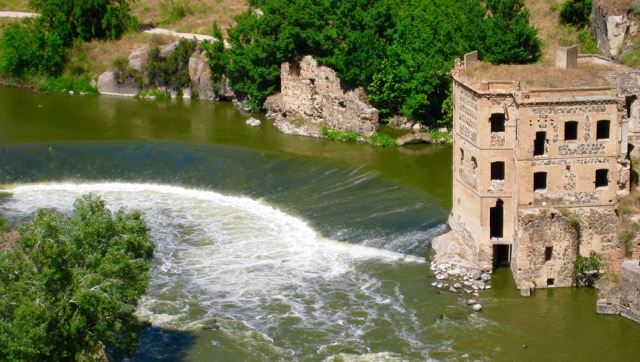 An hour later, we left the Westin and caught the Renfe AVE high-speed train to Toledo, approximately a thirty-minute ride. My first visit to the city was in 1969 with my parents, and I recalled that good walking shoes were a must, as we would definitely put them to the test. I was looking forward to seeing the former capital of Spain again, which was the seat of the Spanish Empire until the mid 1500s, when the royal court moved to Madrid. The train ride passed quickly, and we were soon disembarking at the Toledo railway station. It opened in 1919 and was designed by architect Narciso Clavería y de Palacios in the Neo-Mudéjar style, a form of Moorish Revival architecture characterized by a series of motifs, repeat patterns of arches, calligraphy, vegetative designs, and decorative tiles.

Toledo has one of the most confusing street plans in all of Spain, so we made sure we took a map before leaving the station. Even then, we would get lost toward the end of the day and narrowly escape having to spend the night in the city—not that this would have been a bad outcome, as I had never spent an evening here. There are several easier ways to reach the city atop a steep hill, but we chose the hardest—on foot. Frankly, we needed the exercise after all the gourmet meals we had eaten, not to mention the excellent Spanish wines we’d enjoyed. 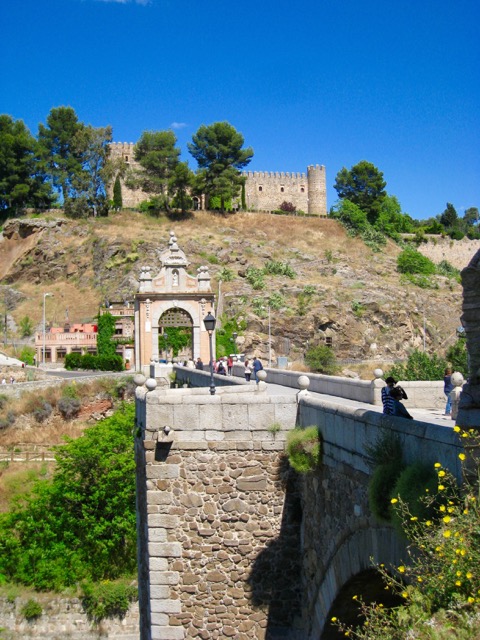 Perched high on a rocky bluff and protected on three sides by a gorge and the fast-flowing Tajo River, which forms a natural moat, Toledo is one of the best-preserved medieval cities in Europe and a cultural wonder, a museum unto itself. You can simply walk along any street to soak up its history, for you are surrounded by it. For centuries, Christians, Muslims, and Jews lived here in harmony, or so I’ve read. The synagogues, mosques, and churches standing together reflect a complex mix of three great religions in this historic city and are a testament to Toledo’s diverse history—and tolerance. But in reality, the three religious groups did not always get along, despite what some would lead you to believe. 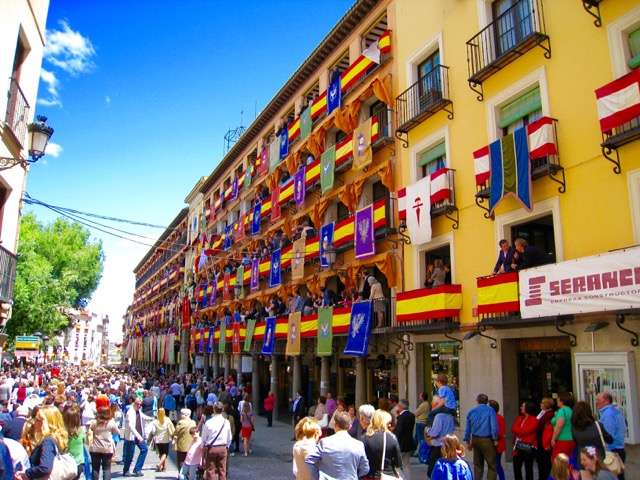 We entered Toledo via the Alcántara Bridge. As we approached Zocodover Square, I was astonished by the growing crowd of people who streamed from the narrow cobbledstoned lanes and flooded the main square. Then I noticed the awnings, garlands, and hanging lanterns that decorated the facades of the buildings, and the strong, almost overpowering herbal scent I couldn’t identify that permeated the warm air. A festival of some kind, but what? Just as Dave said, “I wonder what’s going on,” it dawned on me: the feast of Corpus Christi, one of Toledo’s most important festivals. We made our way through the crush of the masses and wandered up a quiet side street to check our map, take a water break, and slather on sunscreen. Because of its hilltop location, the city is exposed to a lot of direct sunshine and can be quite warm during the day. As we hiked the incline, I finally had my answer to what was impregnating the air. Herb branches—lavender, rosemary, and thyme—blanketed the cobblestones.

Our self-guided tour began with Alcázar, a fortification set on the highest point in Toledo. Built in 1085, the stone fortification dominates the skyline and has commanding views of the surrounding countryside. It functioned as a military stronghold for the Romans, Visigoths, Arabs, and Christians, and King Alfonso VI built his royal palace there. It was destroyed in the eighteenth century during the War of Succession and reconstructed, only to be damaged a few years later by fire, rebuilt, then destroyed again during the Spanish Civil War. At the end of the war, Alcázar was repaired and is now a military museum.