Maryland: The Blizzard of 1958 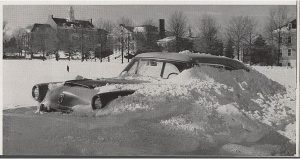 Image credit: Digital Collections at the University of Maryland

We had barely dug out from the February 15-17th blizzard that buried us in six-foot-deep snowdrifts when a slow-moving and deadly nor’easter blew in on March 19, 1958. Billed as “The St. Joseph’s Snow Day,” the snowstorm started as light rain but changed to wet snow and fell for a straight twenty-eight hours. One of the hardest hit counties was Hartford County, where Havre de Grace, the town we called home, is located.

Under the weight of the wet snow, roofs and porches collapsed. Several people who tried to shovel out suffered heart attacks, and two died. Trees and electrical poles snapped. Orange sparks flew, and live wires buzzed in pools of melting snow. Thousands of homes had no electricity or telephone service, including the entire community of Havre de Grace.

For over a week, most of the city suffered through the bitterly cold days and nights with no heat. Fortunately, our home had gas, and my parents welcomed the steady stream of neighbors who stopped by to warm themselves in front of our stove while their meals heated on the burners or in the oven.

Of course, to kids, the snowstorm meant no school, and we loved to exit the house through the ceiling-high windows—because snow blocked the front door. For my father, the storm meant hours of shoveling walkways and digging out his car parked in the driveway. By spring, I’m sure this Southerner (my father) longed for a warmer climate. And his wish would come true, but not for another two years. However, when the time did come, he would not see another snowstorm, or even snow, for a very long while

← The Early Years: The US and Mexico Maryland: Fireworks Explosion →