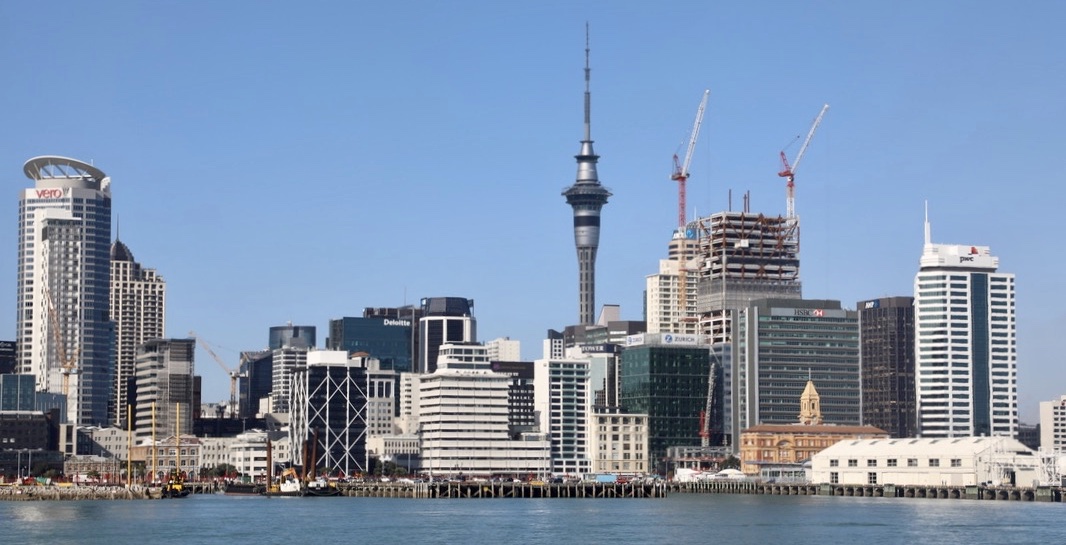 Clouds cleared out on our departure day

By now, we had been on vacation for almost a month. David was burned out on driving and I couldn’t blame him. So we boarded the ferry for the fifteen-minute ride from the Auckland wharf to nearby Devonport, a historical seaside village across the harbor. Devonport originally consisted of three volcanic cones—Mount Victoria, North Head, and Mount Cambria, which was quarried away during the settlement of the area.

After we docked, we spent an hour strolling the quiet streets of Devonport and then followed King Edward Parade along the shoreline until we came to Victoria Road, where we hiked the grade to Kerr Street and climbed the hill to Mount Victoria for a stunning view of Auckland and its harbor. Also of interest to David was the Torpedo Bay Navy Museum. While he toured it, I wandered the town, snapping photos.

Kiwis are friendly people, and if we looked even the slightest bit lost, passersby were happy to stop and inquire if we needed help or directions. And occasionally we did during our three-hour walkabout.

Mid-afternoon, we caught the ferry back to Auckland to tour the waterfront and browse the shops. David had fallen in love with Melbourne in 2014, but Auckland was more to my liking. I loved the way the waterfront was laid out.

During our Auckland stay, we ate breakfast, and a lunch, at Giraffe restaurant, a short walk from the Hilton. Service was excellent and the food very good. I fell for Simon’s Chocolate Pudding and could’ve eaten more than one, but I restrained myself and only ate the one I had ordered.

Months prior to our arrival in Auckland, the Hilton had advised us that a cruise ship would be docking outside of our room the morning of our departure. Rather than view it as an intrusion, I found it quite interesting to see, as I had never been on a cruise ship.

Three days earlier, when our cab driver dropped us at the Hilton Auckland, he inquired about our departure date and time. We thought he was being polite, not the enterprising individual he turned out to be. We had checked out and were asking the concierge to order a cab when the driver who had dropped us at the hotel appeared in the lobby, smiling from ear to ear. “We meet again.” He grabbed our roller bags from the bellhop station and loaded them into his SUV, and we drove off to the airport for the twelve-plus-hour flight from Auckland to LAX, followed by another three from LAX into DFW. And I managed to sleep well on both flights, a first for me.