In the morning we had to switch hotels, which put us behind schedule, so we caught a taxi to Castelo de São Jorge (Saint George’s Castle). The Moorish citadel, built on a hilltop with commanding views of Lisbon and the Tagus River, consists of a medieval castle, the former royal palace, and a neighborhood that housed the elite. Some of its oldest ruins date back to the sixth century. 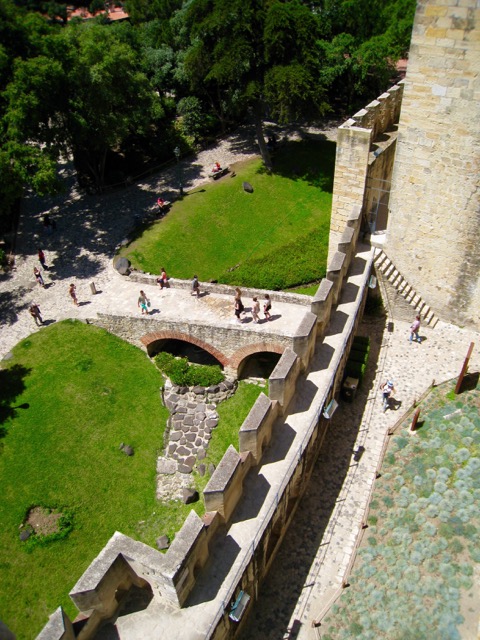 Since then, it has been fortified by the Romans, Visigoths, and eventually the Moors. The fortification was the last defensive stronghold for those who resided there, particularly the elite. In 1147, Afonso Henriques, Portugal’s first king, with the help of the northern European crusaders, captured the citadel. In commemoration of the Anglo-Portuguese pact of 1371, the fortress was dedicated to Saint George, the patron saint of England. 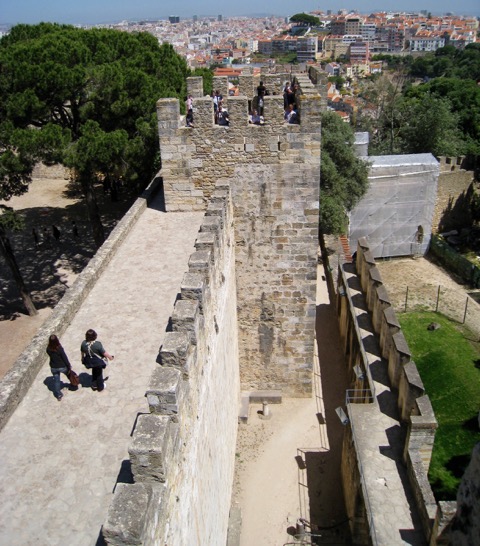 In the thirteen century, the Portuguese kings transformed the castle into a royal palace, and in 1580, when Portugal became part of the Spanish Crown, the castle took on a more important role as a military post. A new fortification was constructed in 1648. It included a defense wall, which was built around the castle and Lisbon. Since 1673, the fortress has been expanded and added on to over the centuries, until the earthquake of 1755. The devastating quake severely damaged the castle and its outer structures, leaving them in ruins. But it was after the earthquake that the most substantial renovation took place on the old medieval citadel, with many new buildings gradually obstructing older ruins. In the nineteenth century, military installations covered the entire monument area and remained until 1910, when the ancient hilltop settlement was recognized for its invaluable historic importance and declared a national monument. During a major restoration from 1938–40, the castle and the ruins of the former royal palace were rediscovered, and today the medieval grounds have regained their former significance and are open to the public. 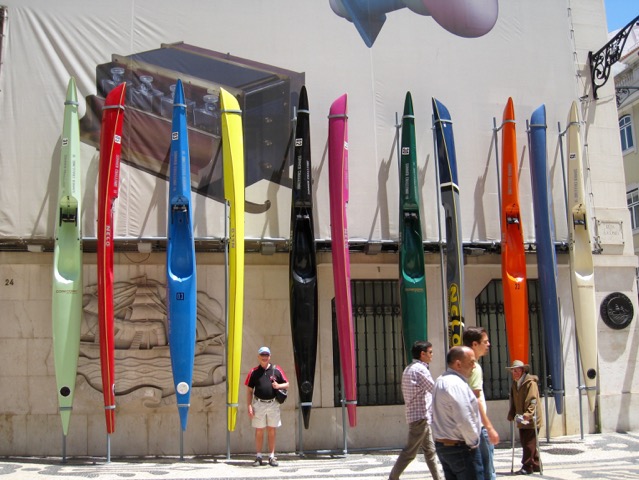 Between our fading colds, aching calves from hiking up and down the narrow spiral staircase of the Belém Tower, and climbing the many stone stairs at the castle grounds, I declined Dave’s suggestion to detour to the MUDE (Museu do Design e da Moda) on our way back to the hotel. But I soon rethought my decision to visit the modern museum of design and fashion, my love for anything modern overshadowing my aches. However, when we entered the building, I was more interested in the structure itself than the exhibitions. MUDE is housed in the former Banco Nacional Ultramarino. The downstairs showcases the vault and safety deposit area, and I felt as though I were transported back in time as I walked the exotic wood floors and saw the marble walls and brass fittings. Although I prefer modern decor and art to anything traditional, I also have an appreciation for medieval architecture—old buildings, period. Admission to the MUDE is free, and if you love fashion and design don’t pass up the opportunity to view their ever-changing exhibitions of apparel, vintage housewares, glass, jewelry, and even radios and vacuum cleaners designed by such celebrated artists as Philippe Starck, Harry Bertoia, Christian Dior, Vivienne Westwood, and Jean Paul Gaultier. I loved the colorful kayaks in front of the museum (see photo). 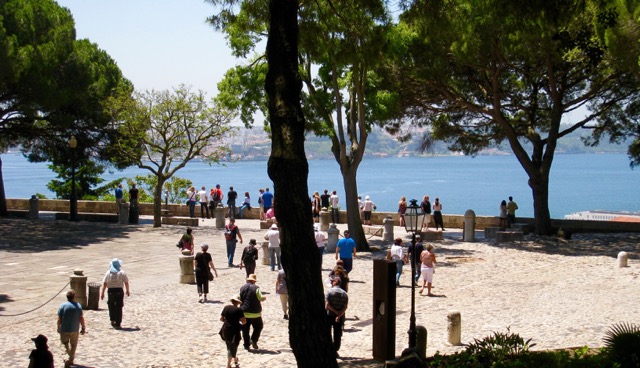 Not wanting to tire ourselves out too much before dinner, we wound our way through the picturesque streets toward our hotel to enjoy what I’ve been told is a Portuguese pastime—a siesta. Portugal’s reputation as one of the sleepiest nations in Europe is something to be proud of, said a local who adamantly defended the threatened tradition. An after-lunch nap is good for increased productivity, especially for artists, writers… She had my attention at “writers,” as I felt I had earned a “restful pause in the middle of the day,”  as she called it. We rose from our siestas ravenous for dinner.

Restaurante Eleven was created by eleven friends. The minimalist cuboid building with its striking burnt-orange facade sits atop one of Lisbon’s many hills. The inventive cuisine is Portuguese/Mediterranean inspired and changes seasonally. Seated at a table alongside the floor-to-ceiling windows, we had the perfect spot for taking in the panoramic views of Eduardo VII Park, the Tagus River, and the castle until daylight faded and the meal took center stage.

You can order off the main menu or select the tasting menu or lobster-themed menu. But as much as I like shellfish, I wanted to taste a variety of dishes, so we both chose the tasting menu, a six-course meal, and included the wine pairings. Thankfully, we had shared a sandwich for lunch. Dinner started with an amuse-bouche of smoked tuna tartare, the tuna sushi grade and seasoned with a light citrus sauce. Next, “Gold Bar” duck foie gras with soya, rum, and orange. Delicious. The soup was a cherry and tomato gazpacho with lobster. The catch of the day, hake, was flaky and buttery and accompanied by a basil risotto. For the main, we had a choice of duck or lamb. We both had the lamb with lemon crust, olive gnocchi, spinach, and mint sauce. Dave helped me polish off my cheese course, but we both managed to eat dessert—pistachio crème brûlée. Our server boxed our mignardises to take with us. On our way out of Eleven, we asked to see the city lights from the upstairs deck, but a private party had reserved the outdoor space, appropriately called Twelve. One of the guests in the party overheard our request and invited us to “come up and take a look.” In all, it was a most enjoyable evening.