Elk with the Grand Teton Range in the background

We checked out of the Old Faithful Snow Lodge right after breakfast to make the two-hour-plus drive to the Four Seasons Resort and Residences in Jackson Hole. We had mapped out a few stops along the way and wanted to allow ample time to photograph anything interesting, and to lunch at Trapper Grill at the Signal Mountain Lodge, recommended by a woman on our flight from DFW to Jackson Hole.

Leaving the Old Faithful Snow Lodge, we took Highway 191 south to Jackson Lake Lodge. The lodge hadn’t reopened for the season, but we walked the grounds and snapped photos of the lake.

At the junction, we veered off of 191 and onto Teton Park Road. Our next stop was Jackson Lake Dam. We parked and grabbed our daypacks, ready for a short jaunt around the surrounding area, but the park ranger who greeted us said grizzlies were active near the reservoir, drawn by calving elk, and the area was closed to humans. Not a problem. We both respected wildlife.

We left the parking lot and were about to drive over the reservoir when we spotted two vehicles on the shoulder of the road and slowed to a crawl. Usually, if there are parked vehicles, wildlife has been spotted. Sure enough, a herd of twenty elk crossed the road in front of us, headed toward the reservoir.

After the elk disappeared from view, we drove over the dam (which is on the Snake River), and soon closed in on our next destination, the Chapel of the Sacred Heart. Signs near the chapel warned visitors to keep off the trails, as grizzlies had been sighted. Some brave souls—or foolish ones—ignored the warnings and trooped down to the lake.

At the Trapper Grill at Signal Mountain Lodge, our server seated us at a corner table with a view of the lake and the Tetons. We had arrived late for lunch and since we weren’t holding up service, we dragged out our meal, enjoying the beautiful vista.

Had it been later in the day, we would’ve stopped for a drink on the rooftop bar at Dornan’s Moose Trading Post to see the Tetons at sunset, but instead we continued on.

In Moose, we picked up Moose Wilson Road, the back way to Teton Village. The narrow, winding road skirts the Snake River, and as the word “snake” implies, the serpentine route seemed to crawl on forever as we slithered toward Teton Village.

Sure, it’s a scenic route, but it also comes with conditions. Once you’re on it, there are no roads that cut through, which means you’re stuck on it. Parts of the road are not paved, i.e., there are two miles of bumpy terrain and large holes to avoid. Watch for pedestrians walking between Laurance S. Rockefeller Preserve and Phelps Lake. They have the right of way.

Don’t tailgate, but be prepared to be tailgaited by locals and seasonal employees. They are very familiar with the route, love to speed, and will tailgate you until they can pass. Regretting our choice of routes to reach the Four Seasons Resort, we inched around a bend in the road and came to a dead stop when we were flagged down by a park ranger. Without uttering a word, he pointed toward a marshy section at the edge of the road. There stood two moose, we eyeing them and they occasionally eyeing us, but they appeared to be more interested in devouring water lilies. After a few pictures, we moved on to free up traffic and to let others photograph the moose. Was the windy, slow route worth it? Yes! 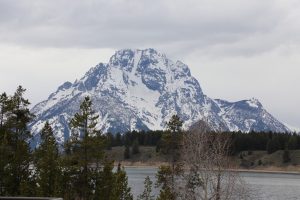 Another view from the Trapper Grill

We dodged rain as we checked into the Four Seasons, then settled in for the night. We uncorked our complimentary bottle of champagne, ordered room service, and shared photos of the wildlife we had photographed while in the parks. Tip: a telephoto lens is invaluable for capturing wildlife that is at a distance.