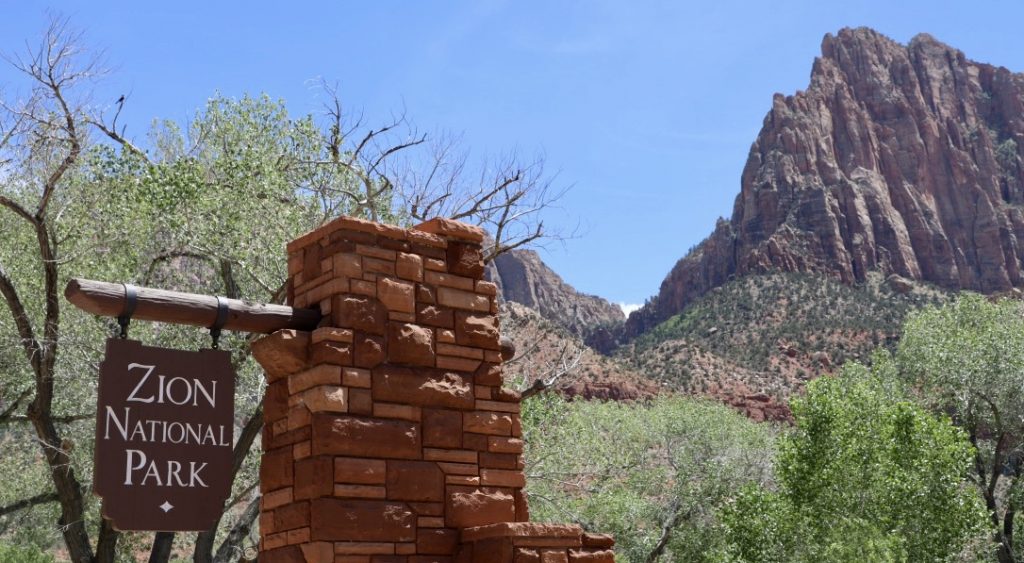 Just around the corner from our lodge was Cafe Soleil. We ate breakfast there and then headed for the Zion Canyon Visitor Center to catch the park shuttle. We planned to ride it to the end of the line—Temple of Sinawava—a forty-minute trip. Along the way we discussed which trails to explore, knowing we couldn’t cover them all in one day. Now I understand what visitors mean about there being a lot of good hikes in Zion, and we could’ve spend a week hiking this park alone.

I overheard a park ranger comment that Memorial Day weekend was the busiest time for the national parks, and even though we had arrived eight days earlier, the crowds had already begun to gather, mostly several big groups of foreign tourists. In retrospect, I should’ve booked the trip in late April or early May. We queued up for the shuttle, and because the park staff was well organized, the wait went fast.

At the Temple of Sinawava, the final shuttle stop, #9, we left the bus and began the first of the three hikes we had decided on—Riverside Walk, Weeping Rock, and Emerald Pools.

Riverside Walk, formerly known as “Gateway to the Narrows,” is a paved sidewalk and an easy trek along the Virgin River and is roughly two miles round trip. The Narrows Hike and the Narrows “Thru-Hike” are much longer—full-day to multi-day hikes and through water. We will save these for another visit, now that we are more familiar with the area and know which hikes require more time.

Weeping Wall in Canada is a set of one-thousand-foot-high cliffs located in the Columbia Icefield in northern Banff National Park, Alberta. In spring and summer, the cliff faces are covered in cascading waterfalls. In the winter, the waterfalls freeze to become a spectacular wall of ice. In the case of Weeping Rock in Zion, a mini-Weeping Wall, spring water seeps through the Navajo sandstone at one hundred feet overheard, percolates slowly through the less porous Kayenta sandstone layer, and “rains down” on the hikers below.

Of the three short hikes, I enjoyed Emerald Pools the most, so it came as no surprise that it is the most-hiked trail in Zion. The rock path skirts behind a soft-flowing waterfall, the mist cooling on a hot afternoon, and has nice views of the canyon.

No, we did not hike Angels Landing, and I have no intentions of doing so. If you are braver than I, and most readers probably are, let me know how your hike went. But before you go, read this blog post by Amanda Williams:https://www.dangerous-business.com/2016/04/angels-landing-hike-zion/

I’ve been lucky to have traveled a lot of the world and now have my sights set on some must-see places in the US. I can check Utah off my list but know a repeat visit is in my future. Of the ten most-visited national parks in the United States, Great Smoky Mountains National Park is #1. I began day hiking in the Smokies back in the early ’70s while in college at Lincoln Memorial University.

In 1978, I visited the Grand Canyon (#2) on a road trip to New Mexico and this month hiked Zion (#3). Behind Zion is the Rocky Mountain National Park (#4), which I plan to visit in June, and I’ve backpacked most of Yosemite (#5) in the late ’80s and early ’90s, as well as Olympia National Park (#8) while attending the University of Oregon, shortly after my Timberline Trail introduction. As I write this blog post, I am researching Yellowstone (#6), Grand Tetons (#9), and Glacier (#10). At some point, I will visit Acadia National Park (#7) in Maine, which looks quite interesting.

After our Emerald Pools hike, we stopped at Zion Lodge for a late lunch on the patio and to give our feet a break. We ended day two the same way day one drew to a close—takeout, wine, and deer watching on our patio at Cliffrose Lodge & Gardens.