Despite being a Texas resident for over thirty years, I hadn’t delved deeply into the local history of the Lone Star State until I began to write book four in the Darcy McClain and Bullet Thriller Series—CLON-X. Then, the more I dug into the history of the surrounding towns in my locale, the more intrigued I became.

For generations, Native Americans lived in the dense forests and windswept prairies of what we now call North Texas. In 1836 the new Republic of Texas claimed the frontier. To encourage migration, the Republic hired an investment company—the Peters Colony—to recruit families to settle in north-central region. The area later became the counties of Tarrant, Denton, Parker, Wise, Palo Pinto, and most of Dallas and Grayson.

The Peters Colony used handbills and advertisements to spread the word: Bring your family to Texas, establish a farm or ranch, stay for a minimum of three years and get your land—free! Good deal, but most weren’t willing to face the dangers of the frontier. However, in 1844 some brave souls made the perilous and arduous journey for Texas with settlers originating from Alabama, the Carolinas, and Tennessee. 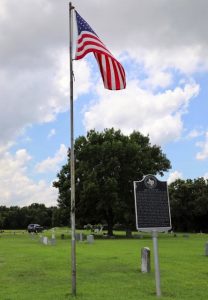 They braved swollen streams, suffered illness, and fought hostile Native Amerians. Most turned back, but a few pushed on to return a year later to Missouri to talk up the wonders of Texas. Convinced of the opportunities that the Lone Star State held for them, the families again set out for Texas. About two months after leaving Missouri the settlers arrived in what is present-day Southlake and Grapevine. They were the first white settlers and were known as the Missouri Colonists.

Married men who had signed with the Peters Colony received 640 acres, and single men 320 acres. They lived in “starter homes,” simple log cabins with no windows until months or years later when they had the time to build log houses.

In 1847, Hall Medlin led another group from Missouri to the area, but by 1857, discouraged by drought, and by how “crowded” the area had become, some Missouri colonists left for California while others lived out their lives in North Texas. Of the deceased, many rest eternally in Medlin Cemetery in Trophy Club, a neighbor to Southlake, and a few of their descendants still live in the area.