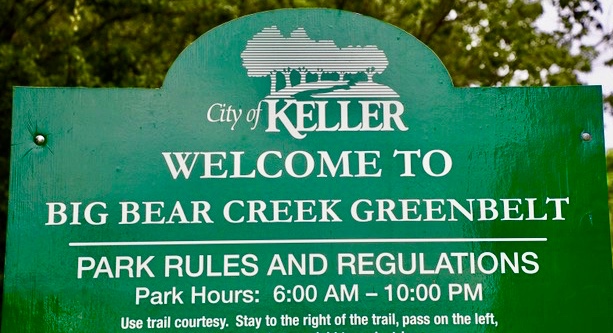 The reason for these forthcoming series of blog posts is to introduce our readers to the “live locations” for particular scenes in our fourth thriller—CLON-X.

In chapter one, the setting is Bear Creek Park in Keller, Texas. It’s here that Bullet finds a canvas sack submerged in the water.

When I moved to Texas in the fall of 1990 I had heard that Keller had a great trail system, but back then I wasn’t interest in biking or hiking. Instead, I had my sights focused on setting up house, landscaping our new yard, and most of all, planting a vegetable garden.

That changed, and in a big way, after we bought our first giant schnauzer—Shotz. An exuberant bundle of nonstop energy, the feisty three-month old wore me out day after day. “Don’t worry,” some dog owners reassured, “she’ll calm down as she ages.” Truth be told, she did, soon after her fourteenth birthday. Granted, none of this advice had come from giant schnauzer owners. They, on the other hand, chuckled and wished me good luck.

It soon became apparent that I had to channel Shotz’s boundless energy into something more productive; otherwise, my working pup would find her own tasks to keep herself busy, some that would definitely test my patience. I had bonded deeply with my mischievous kid and my idle threats of returning her to the breeder fell on deaf ears. She was more interested in getting into trouble than worrying about a return trip to Northern California where she had been bred.

By now, the house was comfortably habitable, the yard landscaped, and my vegetable garden thriving. So, lo and behold, I had a brilliant idea for wearing her out besides watching her swim in the backyard pool to amuse herself. Time to check out Keller’s trail system, a pleasant change for her and for me, because every once in a while writers need to leave their computers to exercise their bodies rather than their minds.

It was on one of these four-mile long walks that Shotz discovered a trash bag bobbing in Bear Creek and book four of the Darcy McClain and Bullet Series—CLON-X—was born.

These daily hikes also fueled my brain cells and from them the literary juices flowed; seeding plots for current and future novels in my thriller series. At the time of these most recent walks I was  already well over a hundred pages into Gadgets and it dawned on me that my main character, Darcy McClain, should have a canine partner. Great idea, but like most great ideas, they often come with major challenges, as did this one. 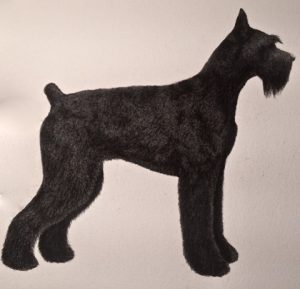 Although the two previous books in the series—Brainwash and Genocide—had not been released for sale, the thought of reworking them to incorporate a canine partner for Darcy meant extensive rewrites of both thrillers. The thought alone put my brain on overload. But I knew that as much as I fought the addition of a full-time canine, I’d end up losing the battle, so the rewrites began. Adding Bullet, I later discovered, transformed the entire series and in a key way. Going forward, from CLON-X on, he has played a significant role in shaping the plotlines.