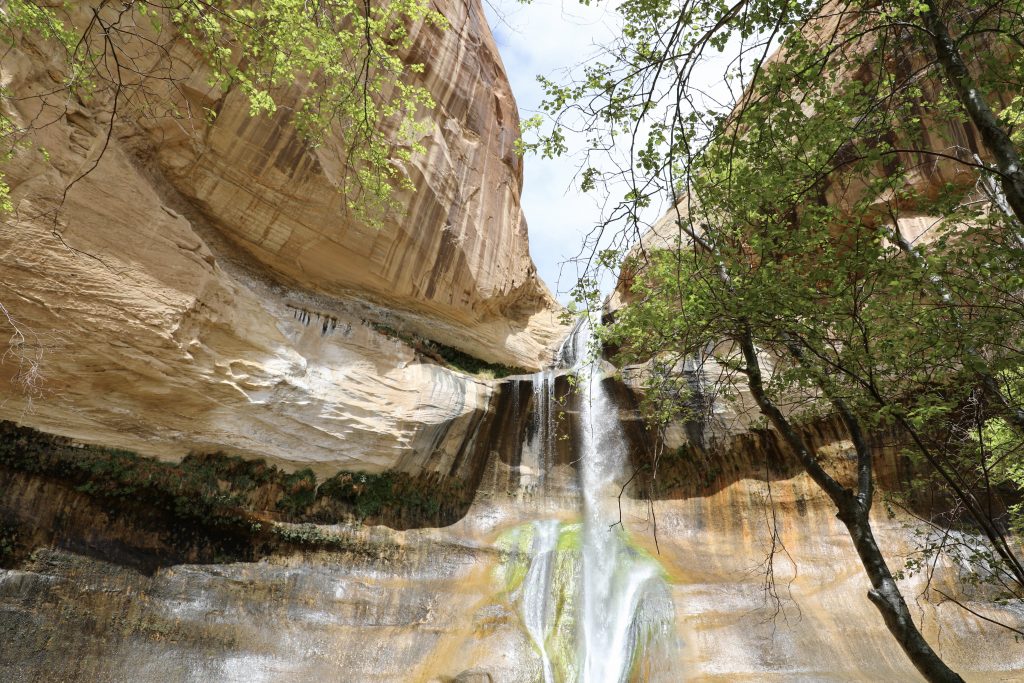 Early the next morning we checked out of the Stone Canyon Inn in Tropic and drove to the Escalante Interagency Visitor Center in the Grand Staircase-Escalante National Monument (GSNEM). The staff was very helpful and suggested the Calf Creek Falls hike. The elevation change is minimal, but the trail is sandy, which can make the going strenuous in some sections. The average hiker can complete the six-mile round-trip trek in about four hours, not accounting for stops to snap photos. The main attraction of this hike? The 126-foot-high waterfall.

Dogs are allowed on the trail as long as they are leashed. There are no restroom facilities on the route, and be sure to carry water. You can fill your bottles at the campground faucet, and if needed there is “emergency water” in jugs along the trail. The parking fee is $5. We asked a fellow hiker if he had change for a ten, but he informed us that we could place our annual park pass on the dashboard in lieu of the parking fee.

As we wound our way through the Gambel oaks, we could hear, and see, the steady flow of Calf Creek, but we never caught sight of any beavers, not even at the beaver ponds. This lush canyon is also on the migratory route for hummingbirds, ravens, peregrine falcons, and spotted towhees.

In March the National Park Service closed several climbing routes to protect the nesting sites of peregrine falcons. The sites are monitored until the chicks leave and reopened at that time. The American peregrine falcon was near extinction in the 1970s but was removed from the endangered species list in 1999, after twenty years of recovery efforts. I feel fortunate to have heard and seen these predatory birds soaring high overhead as we walked silently along the path toward the falls.

Halfway down the trail I was wondering the same thing another hiker freely expressed when she stopped for a water break. “I hope there’s a payoff.” We heard similar comments as we continued on past the pictographs painted by the ancient Fremont people who inhabited Utah from AD 700 to AD 1300. They lived adjacent to but were distinctly different from the well-known Anasazi culture. Pictographs are painted images, while petroglyphs are carved into the rock surface.

Right about the time I was again wondering if we would ever see this famous waterfall, I heard it—music to my ears as my feet sank lower in the sandy soil and the sun beamed down on my bare arms, and I was growing hotter as the afternoon wore on.

Was the waterfall worth the hike? Yes. I stood at the pool’s edge and let the cool mist wash over me as I stared up at the cliff walls. From every crack seeped water, the moisture nourishing maidenhair ferns and scarlet monkey flowers as they clung to the cracks in the rock facade.

We took a half-hour break and then retraced our steps to the trailhead, making good time on the return trip. On the hike back, when asked by several hikers heading in whether it was worth it, we replied, “Yes, the waterfall is worth it.” We also bumped into several solo hikers who, days earlier, had asked me to take their photos during our hikes in the amphitheater and Weeping Rock. We greeted each other like old friends and shared a water break together.

By the time we pulled into our lodgings for the night, we were ready to prop up our feet and give them a rest. Like the Stone Canyon Inn, the Capitol Reef Resort also offers several lodging options, but unlike Stone Canyon, it has some unique accommodations—Conestoga wagons and teepees. Not interested in roughing it, we had reserved a cabin with a kitchen. The resort does have a restaurant and they serve three meals, but we ate at our cabin because the weather was perfect, we had a nice back patio, and the view was stunning. 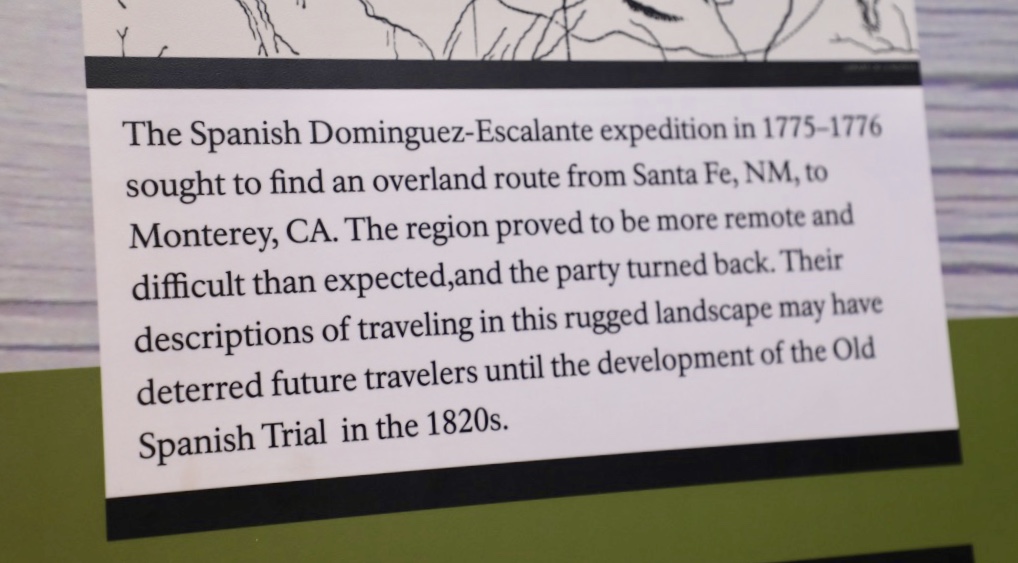 Why is it called Grand Staircase-Escalante? https://www.rubysinn.com/why-its-called-the-grand-staircase-escalante-monument/  But why Escalante? Read more about The Old Spanish Trail in a previous post: https://patkrapf.com//2017/07/13/new-mexico-book-settings-abiquiu/