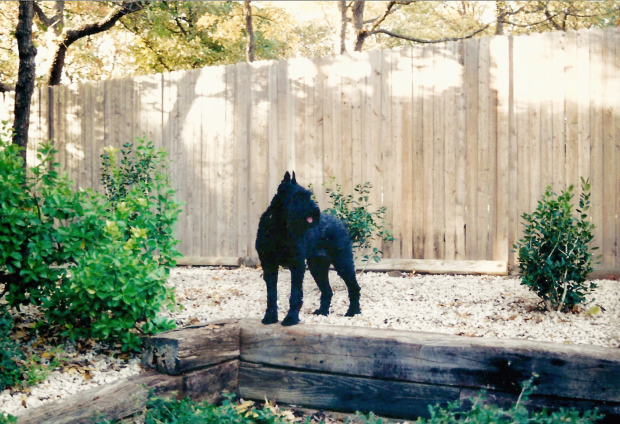 In June 1995, we started planning our first road trip with Shotz, which would be to New Mexico. Our initial departure date was set for the weekend after the July 4th holiday. On the evening of the 4th, she refused to eat and became lethargic. We took her to the emergency clinic. They informed us she had a virus and gave her a shot.

Around dawn on the following day, she had grown weaker and was gasping for air, vomiting, and unable to go to the bathroom. We immediately contacted our vet, Dr. C., and she showed up at the office two hours before opening. Shotz could no longer walk and had to be carried from the car. The moment Dr. C. lifted Shotz into her arms, with my husband’s help, she vomited green all over our vet.

Badly dehydrated, Shotz would have died if she had not received medical help within the next hour, Dr. C. said. The vet determined that Shotz had a bowel obstruction of some kind and ordered X-rays. And, Dr. C. mentioned the possibility of surgery. Worried, we left Shotz at the clinic and went home to wait.

Later in the day, Dr. C. called to say Shotz had a hickory nut lodged in her lower intestines and thankfully had passed it without undergoing surgery. Mineral oil in her IV drip had done its job. The news of an obstruction came as no real surprise since everything seemed to make its way into her mouth: hickory nuts, rocks, wood, and cardboard. She relished anything but food. Relieved beyond words, we picked her up the next day, and soon our “Devil Dog” returned to normal—wild.

Since our vacation plans for July were a bust, we rescheduled for Labor Day weekend. Like her introduction to the swimming pool, Shotz’s first long car trip went without a hitch . . . more often than not. She loved to travel by car but hated to be left in her SUV, and she made sure we knew just how unhappy she was about being left behind, even for a few minutes. In one twenty-minute period, she chewed through the seat belts in the backseat until they retracted into the door. Next, she snacked on the grab handles and gnawed on the headrests. This came as quite a surprise since she had never destroyed anything in our Texas home except a lone wooden coyote that sat near the fireplace.

During the long drive from Keller to Albuquerque, we stopped frequently to work the kinks from our necks and water Shotz. She loved these stops, with lots of new smells to explore and some of her own to leave as mementos. If she deposited anything solid, we always picked up after her, as good dog owners do.

Her first night in a motel (in Albuquerque), she was a bit squirrelly, especially after her debut drive, a ten-hour one across Texas and into New Mexico. She sat near the door, her nose planted to the threshold, and growled at anyone she heard in the hallway outside but quieted down after we moved her crate into the room.

Refreshed after a good night’s sleep, we drove north on the I-25 to Bernalillo, where we picked up Highway 44 and motored on to Nageez. There, we headed south on 45 to 57; our destination was Chaco Canyon to see the Anasazi ruins, an ancient village dating back to approximately 900 AD. The Anasazi inhabitants constructed massive stone buildings called great houses. Some stood several stories high and housed hundreds of people. And, despite the desert climate, the pueblo farmers grew corn, squash, and beans by building an elaborate irrigation system to divert rainwater off the cliffs to their fields. If you visit the Four Corners area, Chaco Canyon is a must-see destination.

Initially, we were told dogs were permitted on the dirt trails, but when we reached the trailhead, the park ranger informed us otherwise. So since the temperature was a cool 59 degrees, we put Shotz in the crate, cracked open the windows and sunroof, and hiked to the ruins for a quick photo shoot. She howled the entire time we were gone, prompting us to make our side excursion a quick one.

Back on Highway 44, we sped north to Farmington, a fertile valley fed by the San Juan River, a tributary of the Navajo Dam, which in turn is fed by the runoff from the Colorado Rockies. The lush green terrain was in direct contrast to the stark desert of Taos, Santa Fe, and Las Cruces, areas I knew well and had visited often.

We enjoyed our two-day stay in Farmington, but with no pool to wear down our nine-month-old wild child, we started searching for ways to tire her out. Our quest led us to a park very close to our hotel, the Berg Riverwalk, a network of stone trails, private seating areas, and picnic benches that skirts the Animas River. The waterway flows through the center of town and is a tributary of the San Juan River. In many ways, the Berg Riverwalk reminded me of the San Antonio Riverwalk in south Texas.

Now accustomed to hotel life (giants can be quite adaptable), Shotz slept a solid six hours, so we rose at dawn the next morning for a day trip to Shiprock and the Bisti Badlands. Doing both proved a bit ambitious, but we set out early, with Shiprock first on our agenda.

Shiprock (“winged rock”) is over seven thousand feet in elevation. The monadnock is on the high-desert plain of the Navajo Nation in San Juan County, New Mexico. After an hour to photograph this formation, stare in wonderment at it, and contemplate all it symbolizes in Navajo religion and tradition, we drove back to Farmington.

Next, we cruised south along 371 to the Bisti Badlands, a maze of volcanic rock formations that project from the desert floor like alien figures from Mars. I had a firm grip on Shotz’s leash as we wound our way through the stone labyrinth, but she spotted something up ahead and yanked free. I raced after her, but she managed to widen the gap between us. When I couldn’t catch up to her, we ran back to our SUV, which was parked on a ridge, and climbed onto the front tires to survey the desert floor, hoping to catch a glimpse of her.

However, even from this vantage point, there was no way to see into the dense maze of passageways. As dusk approached, fear set in. The park closed before nightfall, and even if we defied the rules and stayed, searching for a black dog in the dark was near impossible unless she came when called. Knowing her track record for obeying the “come” command, we didn’t hold out much hope.