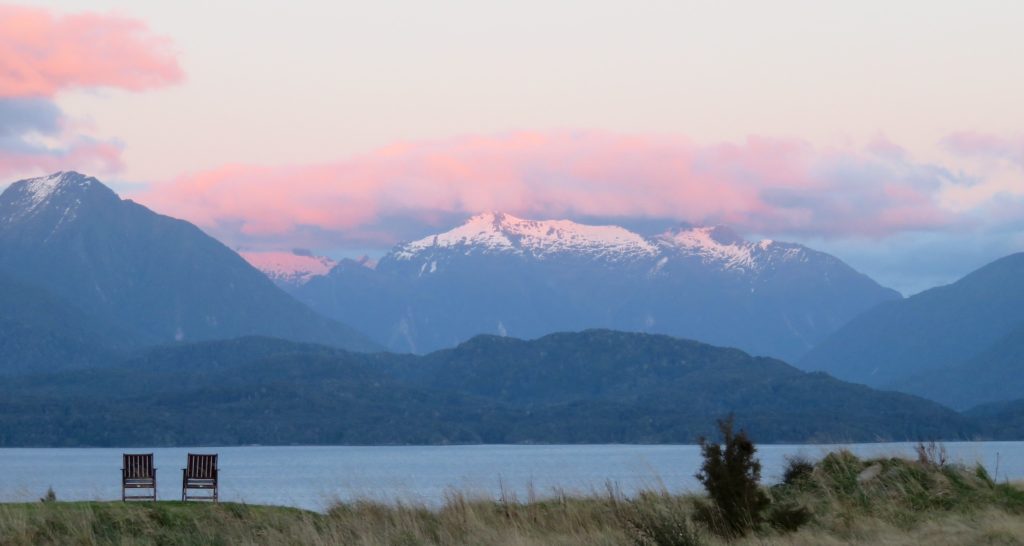 We rose to a cold, overcast morning. I stepped onto our balcony to gauge just how chilly the weather was. Frost glistened on the front lawn, and heavy, gray and red clouds hung over an icy blue Lake Te Anau. We had a full day ahead—tramping (hiking) in Fiordland National Park in the morning and a water cruise of Milford Sound in the afternoon. We grabbed Windbreakers and day packs and went downstairs for breakfast.

Alan Cunningham, who manages the Fiordland Lodge, greeted us as we entered the living room. He’s personable and welcoming, making you feel at home. He brought us hot tea and coffee while we waited for the waitstaff to finish setting the tables.

After breakfast, we met Stephen, our tour guide for the morning, at the lodge entrance and climbed aboard his small bus. Trips & Tramps specializes in small group tours and walks. Another couple and their two teenage boys on holiday from Tassie would be tramping with us. This was the first time I had heard Tasmania referred to as Tassie. Introductions were made and off Stephen drove. 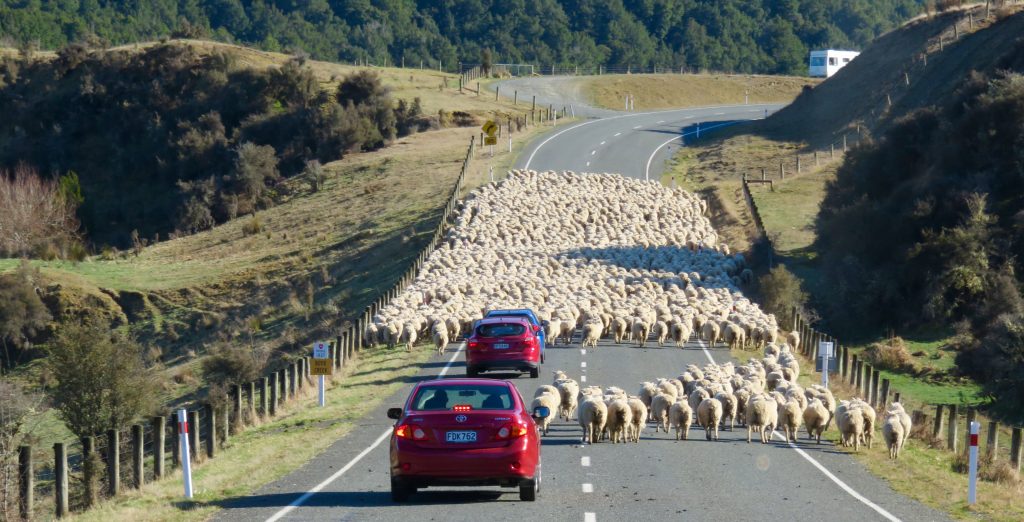 We hadn’t gone more than a mile when Stephen reduced speed and then braked. Hundreds of sheep scampered from an open pasture gate and sprang into the road in front of our bus. Stephen shouted to a man named Peter, one of two shepherds who whistled commands to their blue heelers. The men waved back. “We aren’t going anywhere anytime soon,” Stephen said, which was fine with all six of us. We disembarked, cameras and phones in hand, and the photo shoot began.

About thirty minutes later, we reboarded the bus. During our drive from one trail to the next, Stephen regaled us with local lore; recounted the antics of the cheeky, often destructive keas; and sadly, described the decimation of the native bird population by the imported stoat. Along the way, he demonstrated how a stoat trap, used to control the voracious predator, worked.

That day’s hikes were three easy ones. The next time we tramp in the Fiordland National Park, we will still choose guided walks but opt for longer, more intermediate-grade hikes. On our last tramp for the day, Stephen showed us to the trailhead, but he would not be joining us. He was staying behind to guard the bus. The notorious keas had done “a real number” on his vehicle in that exact location a month earlier, destroying the weather stripping around the bus’s windows. 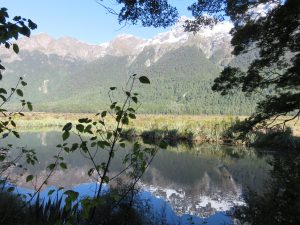 The short jaunt to our Mirror Lakes walk led us to a picturesque lake. We snapped photos, took a short break, and then headed back to meet up with our guide. When we returned to the bus, we found Stephen defending his vehicle from five keas. Two flew off as we approached, but the remaining three were happy to stay and pose for photos. A crowd of tourists soon engulfed the birds, and the mischievous keas appeared delighted to be the center of attention.

Back aboard the bus, we headed for Milford Sound via the Homer Tunnel, which cuts through the Darran Mountain range at the Homer Saddle. The tunnel has no lights and the two-lane road is narrow. The once-single gravel lane has been enlarged and the surface tarsealed, but the raw granite walls remain. The tunnel, located in a high-risk area for avalanches, was opened in 1954 and links Te Anau and Queenstown to Milford Sound. 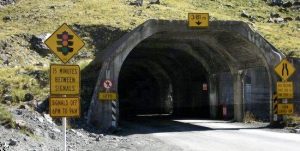 Stephen dropped us off at the Milford Mariner, and we climbed aboard our boat for our afternoon launch excursion. The day hadn’t warmed much, and being on the open water was even chillier. We ate lunch belowdecks, and I decided to stay in the warm dining room after we finished eating. David, armed with his camera, went aft to take pictures. With him on deck, I knew we wouldn’t miss out on some great photos, and from my window seat, I had a good view of the canyon waterway as we broke moor and sailed for the sound.

Sheer rock cliffs soared skyward, the precipices originating from the depths of the fiord’s seabeds, and because of the high rainfall, multitudes of waterfalls from alpine lakes cascaded down the rock faces. The crowning glory was Mitre Peak, rising almost 5,400 feet above the waterways of the sound. 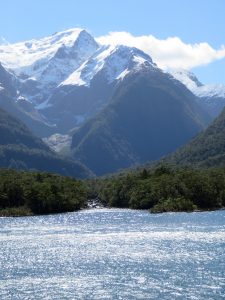 Tired but pleased with our day’s adventures, we were met on the docks by Stephen, who escorted everyone to the bus. When he asked David about our next destination, David told him we were headed to Dunedin. He smiled and replied, “Oh, the land of the Mcs and the Macs.”

Dinner at the lodge that night was tuna tartare with a cucumber relish, duck with a port wine reduction, new potatoes, and a lemon custard for dessert.