Sunrise in Hobart, and David and I walked the Franklin Wharf, the Castray Esplanade, and the surrounding streets, ending up at the Rendezvous Lounge Cafe in Salamanca Square. The eatery’s ratings were “fair,” but it opened shortly after 7:00 a.m. and we were hungry. Our poached eggs topped with wilted spinach and a side of tomato relish was delicious. I sipped hot tea while David surfed the Net to answer his question of why the square was called Salamanca.

Named after the 1812 victory of the Duke of Wellington in the Battle of Salamanca, in the Spanish province of Salamanca, Salamanca Place was built during the whaling industry boom in the early- to mid-nineteenth century. The area consists of rows of sandstone buildings, which were formerly warehouses for the port of Hobart Town. In the mid-1990s, Salamanca Square was built, and the old warehouses now house shops, galleries, cafés, and restaurants.

Every Saturday the Salamanca Market, a community market popular with locals and tourists, is held between 8:00 a.m. and 3:00 p.m. at Salamanca Place. There is also a grocery store nearby called Salamanca Fresh. They sell fresh local produce, as well as conventional items found in any grocery store.

We still had several hours before we had to catch the airport bus, so we browsed the art galleries and bought a few souvenirs for family and friends, and a stuffed animal for me—“Diego,” a Tasmanian devil. I really liked the island, but sadly, our Down Under holiday was drawing to a close. That afternoon we caught a flight to Sydney.

Sydney. We checked into the Marriott Circular Quay, grabbed our daypacks, and played tourist, wandering the streets for hours, taking in the sights and shopping. We could have walked to our restaurant that night, but we had already spent hours touring the city and our feet needed a break, so we flagged a cab to the Woolloomooloo Wharf to dine at China Doll. We sat outdoors, the balmy evening inviting, and feasted on crispy shrimp dumplings and pork san choy to start, followed by a sashimi platter and tamarind-crusted duck. Our first evening in Sydney ended with an excellent wine from Australia’s McLaren Vale region.

Day two in Sydney. Now, I could finally strike off my list the second architectural wonder I had longed to see. I had already visited the Guggenheim Bilbao, and today we had arranged for a guided tour of the Sydney Opera House.

In 1954, Eugene Goossens, conductor of the Sydney Symphony Orchestra, as well as the director of the New South Wales (NSW) Conservatorium for Music, met with NSW premier Joseph Cahill, and they agreed that Australia needed an opera house.

In December 1955, Mr. Cahill announced an international design competition for the opera house, with Sydney’s Bennelong Point the approved site. The competition required a design for two performance halls—one for opera and the other for symphony concerts.

On January 19, 1957, Danish architect Jørn Utzon was announced as the winner and awarded 5,000 British pounds. Utzon was initially rejected by three judges in the 1956 competition, but his entry was picked by a fourth, renowned Finnish American architect Eero Saarinen, who declared it outstanding. Utzon beat 232 other entrants.

Work on the opera house started in 1959, with ten thousand builders employed, and it opened in October 1973. The estimated cost was around £7 million, but the actual cost grew to £102 million. In 1966, Utzon quit the project after a new state Liberal government was elected and problems arose between him and the new works minister. Utzon left Sydney, never seeing his vision for the interior realized, and never seeing his masterpiece completed. He was not invited to the opening ceremony; nor was his name mentioned. 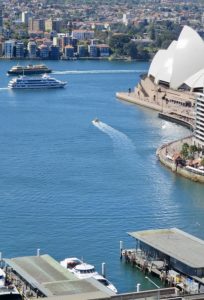 In 1999, the Opera House Trust and NSW government “re-engaged” Utzon as the design consultant for future work on the opera house, and he developed a set of principles as a basis for all future changes to the building. Utzon said his renewed contact with Sydney felt like a “wonderful welcome back to Australia, a hand extended in the spirit of reconciliation, a hand I shake with warmth and gratitude.”

Of the opera house he said, “I like to think the Sydney Opera House is like a musical instrument, and like any fine instrument, it needs a little maintenance and fine tuning from time to time if it is to keep on performing at the highest level.”

The architectural style is Expressionist Modernism, and the building’s site is close to 15 acres. The opera house itself is over 606 feet long and over 410 wide, and rises 220 feet above sea level, around the height of a 22-story building. The roof is made of 2,194 precast concrete sections, weighing up to 15 tons each and held together by 218 miles of tensioned steel cable. The roof is covered in more than 1 million tiles, and has over 20,000 feet of glass, made to order in France and unique to the Sydney Opera House. The largest of the seven venues, the Concert Hall, has 2,679 seats, and the total number of rooms in the opera house is 1,000.

In an earlier post, I wrote about my visit to the Guggenheim in Bilbao, Spain. There I discuss the Bilbao Effect. Every struggling post-industrial city has the same idea: hire a star architect (like Frank Gehry) to design a branch of a famous museum (like the Guggenheim), and watch your city blossom with culture. After all, it worked for Bilbao.

The Bilbao Effect pumped millions into the city’s economy with up to a hundred thousand visitors each month patronizing the hotels, restaurants, and shops. And Bilbao generated about $100 million in taxes in the first three years of operation. Today, over a million people visit the museum per year. 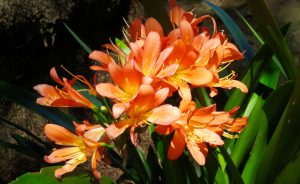 The Sydney Effect? According to a report by Deloitte, the Sydney Opera House is one of Australia’s key assets, contributing $775 million to the Australian economy every year. And it has a cultural and iconic value of $4.6 billion.