Mid-morning, Fin from Par Avion Wilderness Tours picked us up at The Henry James Art Hotel and drove us to the airport in Cambridge for our tour of the Southwest National Park. This magnificent park encompasses over six hundred thousand acres of wilderness and is the largest park in Tasmania. Much of the land is remote and retains the same wildness that once characterized new frontiers.

Our plane, a twin-engine “prop job” as I called it, sat on the tarmac. I knew the plane would be small, so the size came as no surprise, and I didn’t blink an eye that Par Avion’s hangar is number thirteen, as I’ve never found the number unlucky, even on a Friday. But what did catch my attention was that Fin, the young man who met us at the hotel, was also our pilot. He must have read the astonished look on my face, as he was quick to reassure me that he had been flying since he turned sixteen and he was now twenty-four. Flying helped him pay for college. We boarded, along with Michael, our guide for the day. Twice, Fin tried to start the engines. He was unsuccessful because of the chilly morning, and his ground crew had to hand-crank both. Young pilot? Hand-cranking the engines to start them?

Stop worrying, I told myself, but soon after we took flight, Fin informed us he would be landing on Bruny Island to “meet up with some birdies.” Two takeoffs and two landings? “No worries,” he said, easing my anxieties throughout the flight with good communication. “Bumpy through this area,” he’d alerted us. “I fly this route all the time and I’m familiar with the changes in current and the zephyrs. No need to be concerned.” 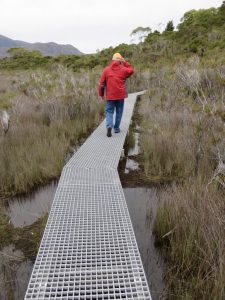 Elevated metal walkways through the peatlands.

We landed on Bruny Island and our four “birdies” climbed aboard, hauling along plenty of camera gear. Someone had spotted the elusive green parrot, and the quest was on to photograph the bird, assuming anyone saw it. Fin and Michael stowed the last of the birdies’ gear and we left Bruny Island, following the South Coast Track all the way to Melaleuca, which is accessible only by boat or plane.

On the ground in Melaleuca, the birdies went their way and we boarded our boat for a ride down Melaleuca Inlet and into Bathurst Harbour and Port Davey. We glided along the calm surface, peaceful and far from civilization. When we reached land, we disembarked and set out for our “ground tour” of the area, tramping along on elevated boardwalks that protected the peatlands below us. Peat is partially decomposed plant matter that forms in wetlands and can be harvested for fuel. In 2016, Tasmania suffered a series of large bushfires that did considerable damage to the peat bogs and the park. Containing and extinguishing a peat fire is challenging, because peatlands are highly flammable. 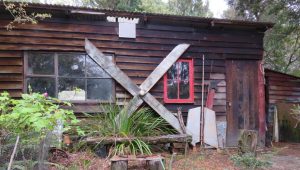 In the afternoon, we left land and reboarded our boat to motor to Clayton’s shack. We docked and trekked up the hill to the small, now-vacant home in a remote section of the park. Already at the house were the birdies, digging into a hearty lunch. They chatted excitedly. Yes, they had captured “quite a bit of footage of the elusive green parrot” and were celebrating with wine. Before we left the house, Michael announced, “If you need to use the bathroom, there is only a pit toilet.” A clean outhouse, I noted, having availed myself of the facility.

Lunch over, we resumed our seats in the boat and rode the choppy waters back toward the landing strip. The only wildlife we spotted were black swans navigating the undulating surface. We came ashore, waited for the birdies to gather their camera equipment, and again they said goodbye. They planned to catch a later flight to Bruny Island, as they still had more bird-watching before dusk fell. 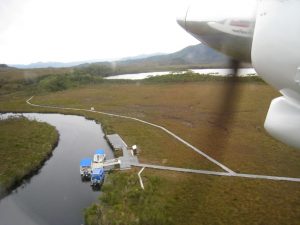 Flying over the boat dock as we leave Melaleuca.

On the return flight, Fin flew over Federation Peak, Mount Picton, and Hobart itself before we landed at Cambridge Airport. It had been a long, almost eight-hour day, but the remoteness and the tranquility of the park, and even the plane flight, all made for a fun day.

Famished, we strolled to the Drunken Admiral Seafarers Restaurant for dinner. A very short stroll away, the restaurant is located at 17–19 Hunter Street, a stone’s throw from the Henry Jones Hotel at 25 Hunter Street. As the name implies, seafood and shellfish is their specialty. We both ordered the fish market chowder for starters, and Yachties Seafood Mixed Grill for the entrées—Tassie scallops, prawns, and grilled blue-eye fish. For sides, green salads and French bread. We chose a Shaw + Smith sauvignon blanc to accompany the meal and passed on dessert. When we left the Drunken Admiral, the day ended as it had started, with a fine mist in the air. The weather reminded me of my college days in Oregon.

While doing research on Hobart, I came across some interesting information on the Drunken Admiral, which was built in 1825–6. Considered one of the finest structures in the colony, the building was constructed of brick with a stone facade, and a slate roof imported from Scotland—quite extravagant for its time. After various uses throughout the years, from a depot for new immigrant arrivals, to a home to two brothers who ran it as a flour mill and warehouse, to housing for Henry Jones’s staff after he purchased it in 1923, it finally became a restaurant in 1979. But the most intriguing fact is that the Drunken Admiral has had its share of ghost sightings. The restaurant owner has reported glasses exploding in people’s hands, bottles sliding off shelves, and women leaving the restroom complaining of feeling as though they have been strangled. In 1880, a Chinese market man was found hanging in the courtyard behind the restaurant. In the 1960s, a worker at the Drunken Admiral who knew nothing about the hanging claimed he saw a Chinese man drift through the walls.