Monday morning, we killed an hour poolside at the Peninsula Hotel, then packed our bags for the drive from Port Douglas to Cairns. As soon as we arrived at the Pullman Reef Hotel in Cairns, the woman behind the check-in desk greeted us with “The pool’s closed.” Her pensive expression told us she expected a negative reaction, but David smiled and replied, “That’s fine. There’s an entire ocean just across the street.” She beamed. “You’re the first guests not to complain.” And indeed there was an entire ocean, and more, across the street from our hotel.

The Cairns Esplanade features an outdoor amphitheater, a large swimming lagoon, grassy picnic areas, walking tracks, public barbecues, shops, restaurants, children’s playgrounds, and the departure terminal for the Great Barrier Reef tours. A long promenade stretches the length of the waterfront, and as soon as we unpacked we made a beeline for the boardwalk, interested in finding an outdoor café for a bite to eat. We chose the Wharf One Cafe, mainly for the location, and ended up eating a very late breakfast rather than lunch. Both of us ordered the cane-cured salmon on toast with two poached eggs, a light meal that wouldn’t ruin our appetite for dinner. We walked off the meal and spent the afternoon touring the waterfront and the cruise terminal.

That night, we dined at Tamarind in our hotel—Thai cuisine. David ordered grilled snapper with turmeric and mint and a side of papaya salad. True to form, I ordered the Penang duck curry with caramelized pumpkin, roasted peanuts, chili, coriander, and served with scented rice. For dessert, a good port, and we called it a day. 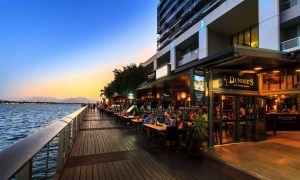 The next morning, we headed to the Reef Fleet Terminal to board a double-decker boat for a half-day excursion to Green Island. We snorkeled, toured the island, and then queued up for a glass bottom boat cruise—arriving back in Cairns for a late lunch at Mondo On the Waterfront. After an active morning, I was ready to relax on their outdoor patio and people-watch as I enjoyed my squid salad.

For dinner, we ate at Dundee’s Restaurant, both of us ordering the fish special, trout with a dill and crème fraîche dressing. 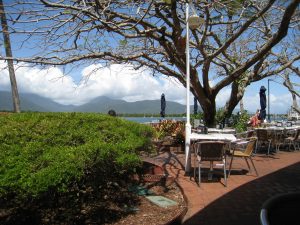 Mondo On the Waterfront.

We woke early on our last day in Cairns, and rather than use the fitness center at our hotel we power walked the pier for exercise, the morning a pleasant sixty-eight degrees, cool by Texas standards.

That afternoon, we caught a flight from Cairns to Brisbane, where we would spend the night. The three-hour plane trip passed quickly, and soon we were checking into the Novotel at the Brisbane Airport.

We freshened up and took a cab to the Reserve Restaurant Milton for one of the best meals we had during our Aussie and Kiwi vacation. The restaurant is housed in “an old terrace building” very reminiscent of historic homes in the French Quarter in New Orleans—plenty of ornate ironwork, crystal chandeliers, and stunning river views. 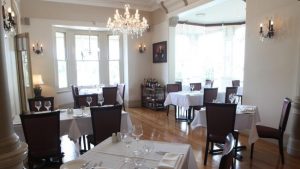 We started the night with drinks in the upstairs parlor overlooking the Brisbane River before moving downstairs to the dining room. From the prix fixe menu, we chose the pheasant terrine. For mains, David had the lamb rump and I had roasted duck. For wine, we decided on a pinot from the Yarra Valley called Giant Steps, a vintage we fell in love with and had a difficult time finding back in Texas. Of course, it was the name of the wine that initially sold us. Dessert was a melt-in-your-mouth chocolate tart. I could have eaten two or three, but I had to save room for the cheese platter and port that followed dessert.

And I’m sorry to write, in 2015 the Reserve Restaurant Milton closed. According to the owner and chef, Kieran Reekie, there has been “a radical change in diner habits, including a shift towards cheaper meals and trendy chains, like the recent influx of burger joints,” which made his award-winning fine diner unsustainable. He went on to say, “The younger generation doesn’t want to sit down for dinner. They want to stand in a queue and have a drink and snack here, then go for a burger, and maybe dessert somewhere else.” That is indeed a shame. For us, the Reserve offered an indulgent dining experience—one of our most memorable in 2014. 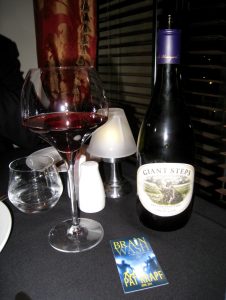 A month after I returned to the US, I finally tracked down a wine distributor for Giant Steps and drove into Dallas to buy the pinot. When I placed the order, the store owner informed me that I had to buy an entire case, as it was a special order. I asked if he could order two cases. I wanted to have extra bottles to give as gifts. He sounded exasperated when he replied, “O…kay.”

At 10:00 a.m. sharp, two men showed up. They worked for the store. I called the owner to ask if he was on his way. He was finishing breakfast and would be there by 10:30 a.m. I reminded him that his website said 9:00 a.m. Yeah, he knew—he had never gotten around to updating the store hours. Thank goodness this is far from the norm for Dallas establishments, and fortunately for me, I was successful in locating a more reliable liquor store for my Giant Steps purchases.