Ocean view from our room at the Hotel St. Clair.

Over breakfast, Jen, Bruce, David, and I continued our conversation of the night before as though it had never ended. And again we remained at our table talking long after the other guests had departed from the dining room. To avoid having the waitstaff work around us, we moved to the living room to say our goodbyes, and we promised to keep in touch via email. It was time for them to leave for Queenstown and for us to drive to Dunedin.

Along our way, we stopped in the town of Mandeville where David wanted to tour Croydon Aviation, an airplane museum, while I took photos of the countryside and basked in the sunny day.

Late in the afternoon, we arrived in Dunedin and checked into the Hotel St. Clair, which is on the esplanade. Our room had an ocean view. The fading day had turned a bit chilly, so we slipped into hoodies to walk the beach and the town until we worked up an appetite. I could have stayed an extra day in Dunedin to photograph more of the Edwardian and Victorian architecture, but time didn’t permit.

Having done enough driving for one day, we chose a restaurant close to the hotel—Spirit House. The food was good, the service slow. The next day we had a full travel schedule—Dunedin to Auckland and on to Melbourne, Australia—so we retired early.

After the drive from Dunedin to Auckland, a layover in Auckland, and a three-and-a-half-hour flight to Melbourne, we checked into the Hilton Melbourne South Wharf and recharged with a short nap.

We had dinner reservations at Vue de Monde, view of the world, and the restaurant’s bar did indeed have a panoramic view of Melbourne. The bar and restaurant are on the top floor of a downtown office building. Only diners and drinkers are allowed on the elevator to the top floor. The waitstaff escorted us to the bar, as we had arrived early—five minutes early, the greeter informed us. Five minutes passed. Ten minutes. Fifteen. Twenty. Because we were uncomfortable seated at the bar with a growing, noisy crowd gathering behind us, David told the bartender we were moving to more comfortable seats near the windows to enjoy our drinks and the views. The bartender summoned a server, who tried to talk us out of moving. He had to know where we would be in order to seat us for dinner, and he had no idea exactly when that might be, despite our having reservations. We moved anyway. Forty-five minutes later, our server showed us to our table in the dining room.

The prix fixe meal began with a selection of appetizers: oysters, wallaby, and salmon pearls to start, followed by lamb heart, duck tongue, and smoked eel, and finishing with steamed pork and duck dumplings. The entrées were Wagyu beef and rack of lamb. The dessert was tonka bean chocolate soufflé. To end the meal, a cheese platter.

At breakfast the next day, we said goodbye to Diane and Denis, who were also headed out of Aoraki/Mount Cook. We hadn’t even left the alpine village when a light flashed on the dashboard of our rental car. The icon appeared to be a snowflake. Snowflake? It was overcast and chilly outside, but snow? Really? We pulled to the shoulder of the road and dug in the glove box for the owner’s manual. David was thumbing through the pages when Diane and Denis waved as they motored by. A few seconds later they reappeared and braked alongside our car to ask if they could help. We explained our predicament, and Diane said the light would go out as soon as the car engine warmed up. She gave us her cell phone number in case we ran into any more trouble, and they drove off. Precisely as Diane predicted, the light went out the minute the engine warmed up. 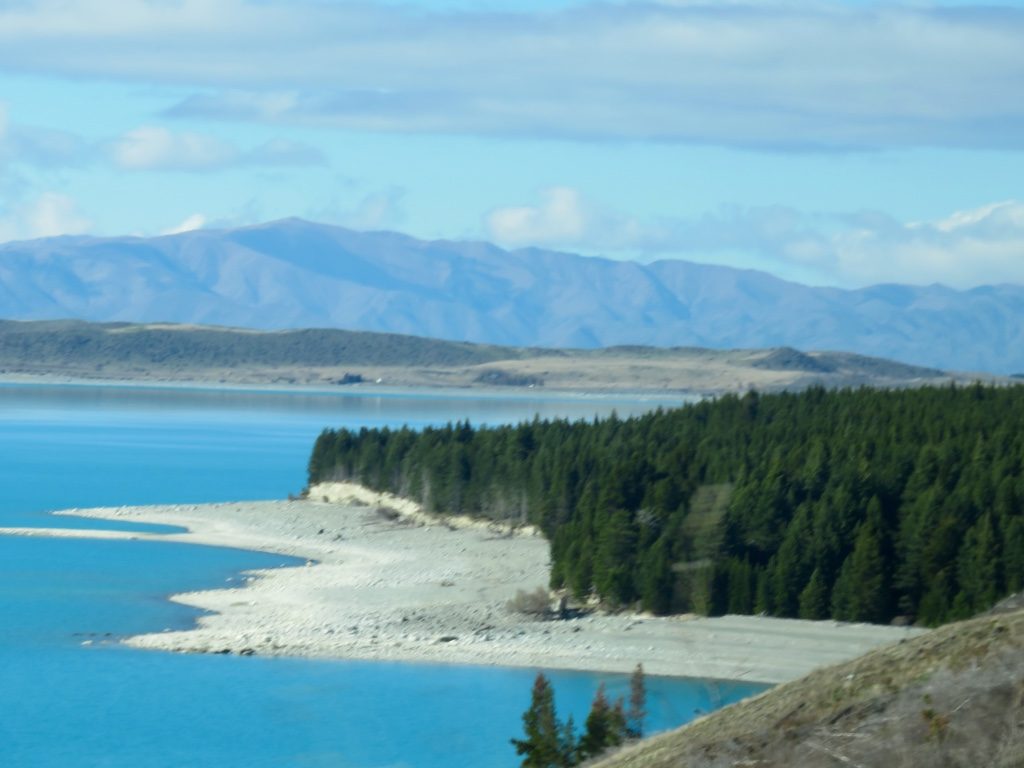 As we cruised along the shoreline of Lake Pukaki, we kept a watchful eye for tourists who were making last-minute decisions to stop for photos. Intent on capturing the views, most braked without warning and failed to park completely off the highway. Some even left their doors wide open as they bailed out of their vehicles to snap selfies.

In Twizel, we steered onto Highway 8, the scenic route. As David often is, he was on a mission to reach his destination—Te Anau— and wasn’t fond of making too many stops along the way, but he squeezed in a salmon hatchery tour, and on the recommendation of a friend in the US, found time for a much longer visit to Glide Omarama. Duly impressed, he put a glider flight on his must-do list for “Down Under #2.” I’m still mulling over this particular adventure. I’ve seen videos of the flight path and the vistas are remarkable, but I’d be crazy to even contemplate climbing aboard a plane with no engine to glide over glaciers. On the other hand, I might give in and go.

As noon drew near, we pulled into the Gibbston Valley Winery to have lunch. For us Texans—used to sizzling 100-plus-degree weather—it was a tad chilly to sit outdoors, but our server gave us a window seat—the next best table. We ordered a cheese platter to share and both had the soup special: white bean, cumin, and mint, an odd combination but absolutely delicious. After our meal we stopped next door for a look-see at Gibbston Valley Cheese, also part of the winery. Everything cheese—cheesemaking, cheese tasting, cheese platters to enjoy on site, and cheese and wine hampers to go. We made a note: picnic lunch next time?

We spent two hours sightseeing in Queenstown before we continued on to Te Anau. Prior to our trip, David had hyped the Fiordland Lodge to the point where I couldn’t wait to see our lodgings for the next few days. And I wasn’t disappointed. The lodge, constructed in 2002, sits on a knoll with rolling grasslands and commanding views of Lake Te Anau. Inside, the construction is natural timber with massive log trusses and full-trunk pillars. The ceilings are thirty-six feet high with plenty of glass to capture the vista, and there is an impressive fireplace of local river stone. And the lodge even has its own library. 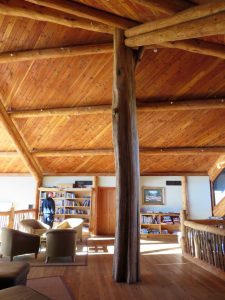 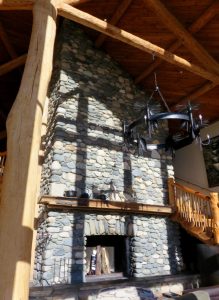 Despite its vast size, the lodge feels warm and comfortable, and the setting private. In the main building are ten guest rooms with lake views, and adjacent to the lodge are two log cabins, ideal for parties of four or more.

As an outdoors person (fittingly, Earth Day was founded on my birthday), I took seconds to discover the flock of sheep grazing in the pasture next door, and even less time to notice the large vegetable and herb garden growing near the entrance. As soon as I unpacked, I made a beeline for both. Daylight dwindled. We bundled up against the chilly evening and joined several couples on the front lawn to sip drinks and watch the sun set over Lake Te Anau. The dark sky soon filled with stars, so brilliant, you felt you could touch them. As the dinner hour drew near, we gravitated toward the intimate dining room. The prix fixe menu offered three choices each of appetizer, entrée, and dessert. We both chose the cured salmon carpaccio with a lemon and dill sauce, the beef filet with eel risotto, and the chocolate tart. 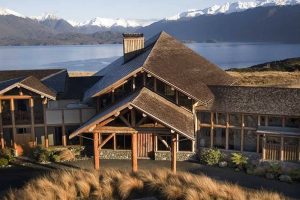