In late February, after a number of passes by several pairs of editorial eyes, I was finally ready to send Genocide to the typesetter. Someone once told me that my goal of perfection would never be obtained, because perfection doesn’t exist. I have no argument with that statement, but striving for perfection is rewarding unto itself, and my father always said, “If you can’t give your best, don’t do it at all.”

In May 2016 we flew to California. Dave came along for fun, and I was on a fact-checking mission to verify earlier research for Genocide. I love San Francisco and Napa, and neither has ever disappointed. We stayed at the Hyatt Centric Fisherman’s Wharf for two reasons: the hotel is centrally located to almost everything I needed to see, and it is not a high-rise. While I don’t suffer from seismophobia, I am realistic about the possibility of earthquakes and will always book a room in a low-rise whenever I am in an earthquake-prone region. I’ve certainly experienced my share—Mexico, South Africa, and many while living in California, as well as a few here in Texas, although nothing on the magnitude of the first three. I posted about my past earthquakes: The Early Years: The US and Mexico and The Ceres Earthquake: Wellington, South Africa

We arrived in the city around mid-afternoon. By the time we checked into our hotel and unpacked, there wasn’t much day left to tackle anything on my ambitious to-do list, so we shopped at Pier 39 for an hour, then watched the comical antics of the sea lions until dusk fell. 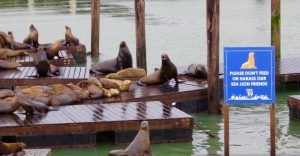 I also love to dine out in San Francisco, as the city has some of the best restaurants in the US. I have my favorites but decided to expand my culinary horizons by sampling some new eateries. The first restaurant on my short list was Volta, a French-Scandinavian brasserie. But don’t get too excited. I’ve learned that Volta has permanently closed after only nine months in business. I’m glad I had the chance to savor their duck terrine with cherry compote and black truffle gastrique, and for my main, the dry-aged duck breast with Seville orange topped with mandarins and roasted turnips—the perfect marriage of textures and tastes.

Daybreak, and I had a full agenda for day two. First I hiked the steep grade to Mandalay Lane, a fictitious name for a real street in San Francisco. I wanted to photograph any changes in the neighborhood since my last visit. I wasn’t surprised to see that many of residences had been remodeled, but this had no effect on the references to the street in my book. I rapped off at least a dozen shots for future reference, recorded a few comments on my iPhone, and caught up to Dave on Lombard to retrace Darcy’s footsteps in the opening chapters of Genocide. 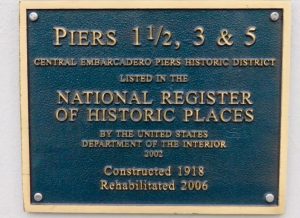 Leisurely, we walked down the waterfront toward the Ferry Building and Pier 1, mindful of runners and cyclists, present even at this early hour and on a Sunday. We made a U-turn at Pier 1 1/2 and headed back up the Embarcadero to Piers 15 and 17. Our tour of the Ferry Building itself was on the list for the next day. Yes, there is also a Pier 1/2. 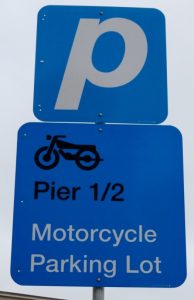 Piers 15 and 17 are the new home of the Exploratorium. The hands-on scientific museum was created by Frank Oppenheimer, brother of Robert Oppenheimer. Both were physicists who worked on the Manhattan Project in the 1940s. For years the Exploratorium was housed at the Palace of Fine Arts but moved to its current location in 2013. The move changed a couple of sentences in Genocide, but since the museum was of no significance to the overall plot, I deleted any reference to it.

We left the Exploratorium for Pier 45, where we ate an early lunch at Alioto’s restaurant, then made the trek to the Palace of Fine Arts via Fort Mason, again following in Darcy’s footsteps. We paused often during our Fort Mason and Marina Boulevard walk to snap pictures on that beautiful, sunny day.

As I retraced Darcy’s steps through Fort Mason, I noticed that repairs were being made to the seawall and the Bay Trail had been detoured. I included the “detour” in my book. Some might say it will date the thriller. In today’s age, technology, and often life, moves so quickly that “history” is inevitable. Photo to the left: The detour was a bit steep and narrow, but Darcy is fit and she sprinted up the steps with ease. 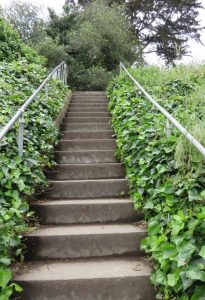 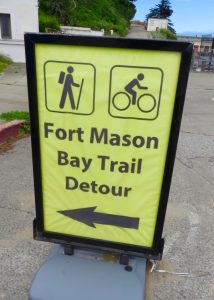 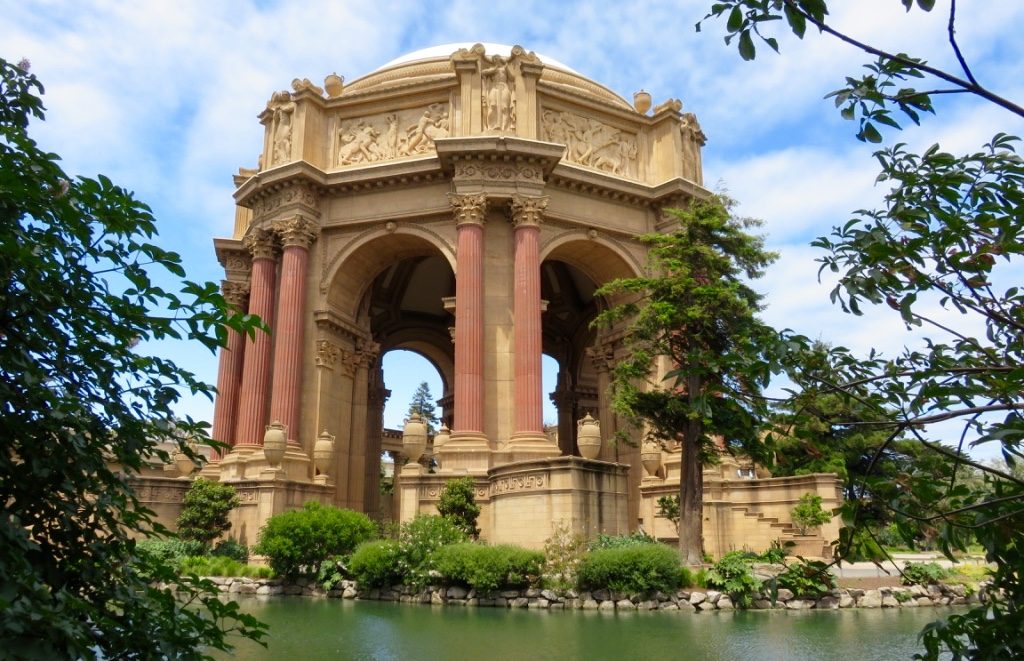 By mid-afternoon we arrived at the palace, “one of San Francisco’s most beloved landmarks.” After a seven-year, $21 million renovation, it reopened to the public in 2011 and was as imposing as I remember from my first visit in the 1980s.

Dozens of photos later, we left the palace to return to our hotel. We hoped to flag a cab for the return trip, but as luck would have it we only saw two, and both already had fares and were headed in the opposite direction. Besides, we needed the exercise to work up an appetite for dinner. Photo below left: Palace of Fine Arts, the very spot where Sean Ireland was found murdered. 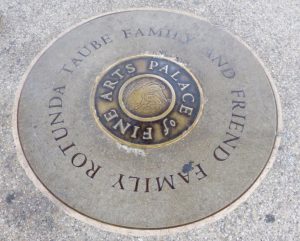 To celebrate our anniversary, we had reservations at the Michelin three-star restaurant Benu run by Corey Lee, formerly the chef at the French Laundry in Yountville. I couldn’t wait to savor his lobster coral soup dumplings. We chose the twelve-course tasting menu along with the wine pairings. The experience can be summed up in one word: top-notch. Our beverage director was Yoon Ha, who excels at wine pairing. He made our evening 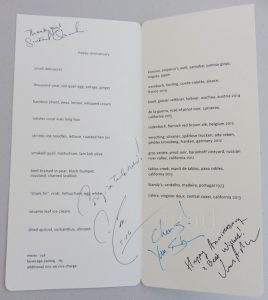 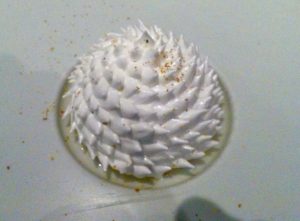 extra special by printing our menu and having the waitstaff sign it with anniversary wishes. To complete the celebration, Courtney, the executive pastry chef, surprised us with an elegant dessert just for the occasion.

On day three we returned to the Embarcadero to visit the Ferry Building. We grabbed breakfast at the indoor marketplace and ate outdoors, watching the steady streams of ferry travelers as they poured into the terminal, in a hurry to reach jobs in the city. 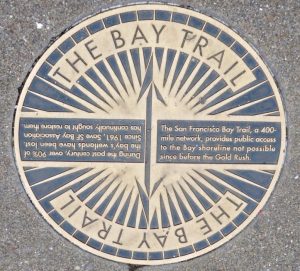 From there we made our way to the Castro District, mapping out our own course—walking or hopping a cable car in one direction and riding the F-line streetcar on the return trip. We wrapped up our fact-checking tour around 4:00 p.m. and changed for dinner. That night we would celebrate my birthday—at Quince.

Quince is “the only Italian-inflected Michelin three-star restaurant in America,” I’ve been told. My interest in it was much simpler: I was there to eat. We both chose the tasting menu and the wine pairings as we did at Benu, but when it came to a couple of choices on the prix fixe offerings, 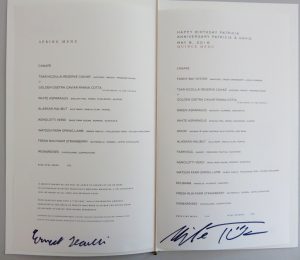 Dave picked one item and I ordered the other, giving us a taste of both. Another memorable evening and another fabulous dessert. 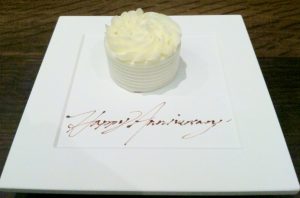