Last year, my readership asked me to devote several posts to a glossary of terms used in Brainwash and Gadgets. Most are specific to the southwestern region of the  United States. I’ve also added a few terms that will appear in CLON-X as Darcy and Rio will return to New Mexico to resolve some unfinished business.

The glossary gives a description of each term and includes a photo(s) for easy identification. I also plan to do a photo blog series showing the exact locations chosen for certain scenes in the novels—for example, the crime scene in the arroyo on Darcy’s land in Taos (Brainwash). The glossary will be divided into three parts: architectural, geographical, and a flora/fauna/miscellaneous terms. 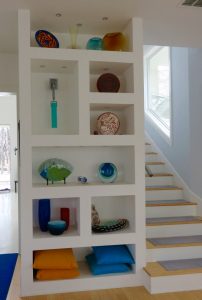 Parapet
A low wall that extends above the roofline in pueblo-style architecture and often masks a slightly pitched flat roof. See also flat roof and cricket in last week’s post.

Portál
Attached, covered porch supported by posts and corbels, the perfect place to watch the sunrise over Taos Mountain or the sunset over Pedernal Mountain. Or you can simply marvel at the flights of hummingbirds zooming back and forth to your feeders. 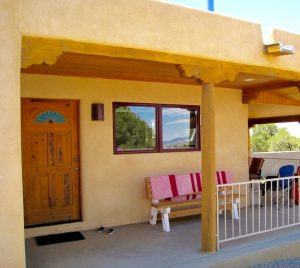 Saltillo Tile
Terracotta tiles made in Saltillo, Mexico. Used indoors and outdoors for flooring, patios, and wall applications. If laid outdoors, the tiles should be sealed to protect against the weather. Shown on a bathroom floor and wall at Ghost Ranch, Abiquiú, New Mexico. 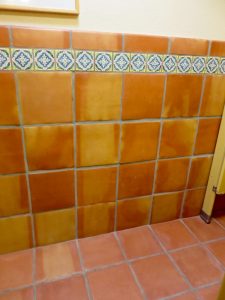 Santo
The Spanish word santo means “saint” as a noun and “holy” as an adjective. Santos are various religious symbols such as statues of saints, angels, or the Virgin Mary. Photo is a nicho displaying a santo and the framed in talavera tiles. See also nicho. 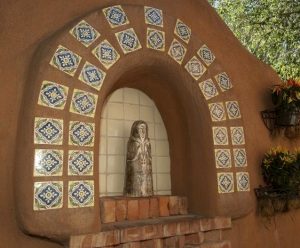 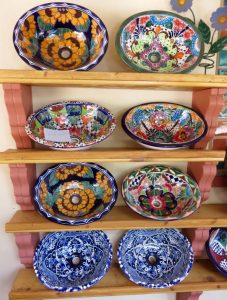 Viga
Round log used as ceiling beams, either shaved or raw (debarked). Can be used indoors or outdoors. Indoors, see latillas in last week’s post A Southwest Glossary: Architectural Terms—A to L