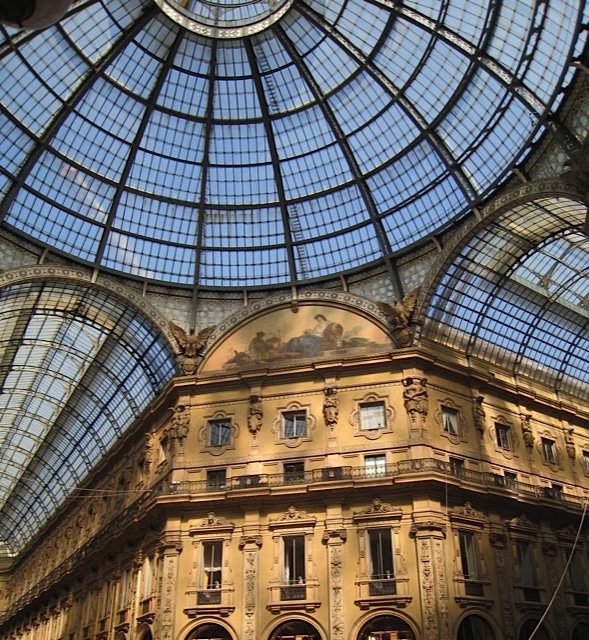 After a substantial buffet breakfast, we left the Boscolo Milano for our first stop of the day, the Brera Art Gallery. While I love modern architecture, I also have an abiding appreciation for historical buildings, which is one reason I am drawn to Europe. My imagination runs wild thinking of what life must have been like in these cities and villages years before America was even discovered. And the countries hold a certain fascination for me because of my European heritage.

From the moment I entered the courtyard of the neoclassical structure, I began snapping photos of the fourteenth-century monastery, which was converted into a gallery by Maria Theresa of Austria. Three minutes into my photo shoot, Dave tapped me on the shoulder and gave me that “Come on” look, so I followed him into the gallery as he was saying, “The first works of art were mainly paintings that arrived in Milan after the suppression of churches and monasteries.”

After three hours of viewing frescoes, other paintings, and a few sculptures, all beautiful to behold, then listening to my history-buff husband explain the historical and religious significance of each piece, I admit to growing a tad antsy. He was relaying how the collection had been substantially enlarged during the Napoleonic era, when an extraordinary number of works were confiscated all over northern Italy as a direct consequence of Napoleon’s policy. In Napoleon’s view, Milan was destined to become a capital and therefore needed an art collection of its own.

By hour four, I found my mind wandering and I started looking around the gallery, seeing it as a potential site for a chapter in my next Darcy novel. Maybe she would meet an informant here? He’d pass her a note . . . a clue to something? My thoughts were running the gamut when I felt a tap on my shoulder. Dave was finally ready to leave for our next stop, the Sforza Castle.

Again Dave waited patiently while I satisfied my architectural fix through photography; then we headed inside to see the Rondanini Pietà, the marble sculpture Michelangelo worked on until his death in 1564. The piece depicts the Virgin Mary mourning the dead Christ. I was particularly interested in seeing it since I had seen the Pietà housed in St. Peter’s Basilica, Vatican City, during my visit in 1969.

Hungry, we both took a few final pictures of the exterior of the castle (not easy with all the tourists lurking), then walked toward the Galleria Vittorio Emanuele II, with lunch and some shopping in mind, precisely in that order.

We ate on the outdoor patio at La Locanda del Gatto Rosso. For once, I passed on the risotto—although I was tempted—and ordered the special of the day, freshly made, al dente linguine heaped with shaved parma and mushrooms in a white wine cream sauce—rich, filling, and absolutely delizioso. We politely declined dessert, being more interested in checking out the shops, but I soon lost interest in the stores since I was so taken with the architecture of one of the world’s oldest shopping malls.

Built between 1865 and 1877 and named after Vittorio Emanuele II, the first king of the Kingdom of Italy, the Galleria consists of two glass-vaulted arcades intersecting an octagon and covers the street that connects Piazza del Duomo to Piazza della Scala. The central octagon is topped with a glass dome.

The Galleria, nicknamed Milan’s drawing room, is a common Milanese meeting and dining place and contains luxury haute couture retailers such as Prada and Louis Vuitton, to name just two, in addition to retailers of jewelry, books, and paintings, and restaurants, cafes, and bars.

On the floor of the central octagon are four mosaics portraying the coats of arms of Italy: Turin, Florence, Rome, and Milan. Tradition says that if a person kisses the bull’s genitals on the Turin coat of arms that this will bring good luck. The practice has created a hole on the bull’s genitals, and no, I did not add to the damage.

After a lengthy photo shoot, I put away my camera, did some light shopping—remember, if you buy it you must carry it—then said goodbye to this mesmerizing glass-enclosed mall for our next destination—the Duomo.

The facade of the Duomo is covered in white marble and the layout is in the form of a Latin cross. The inside can accommodate up to forty thousand people. It has 135 needles on its spires, with the statue of the Virgin on the highest. There are around 3,400 statues and ninety-six giant gargoyles. Access to the cathedral is through five large bronze doors. But what struck me in particular was the light that filters through the Gothic windows into the interior, creating a solemn atmosphere, contemplative and moving.

We wanted to stay longer, but we had reservations to see Leonardo da Vinci’s The Last Supper, Italy’s most famous and most visited painting. We had purchased our tickets two months in advance and even then only two time slots were available. Due to the painting’s popularity, only twenty to twenty-five people can view it at one time and each for a maximum of fifteen minutes. And because of the mural’s fragility, humidity is strictly regulated. The refectory is climate controlled, so visitors must pass through dehumidifying chambers before they can enter the dining room where the mural is located.

Leonardo painted The Last Supper at the request of his employer Ludovico Sforza, Duke of Milan. The original mural occupies the wall of the refectory (dining hall) in the convent of Santa Marie delle Grazie and measures fifteen by twenty-nine feet. He began the fresco in 1495 and finished in 1498—quite an accomplishment for the known procrastinator.

The fresco depicts the moment immediately after Christ said, “One of you will betray me.” The twelve apostles react in different ways; their movements and expressions are magnificently captured in Leonardo’s work. He focused on the impact of Christ’s words and on the apostles’ reactions to those words. All display horror, anger, or shock. Only one, Judas, has his face in shadow, and his hand clutches a small bag. Thirty pieces of silver, perhaps? Only Christ is calm.

Unfortunately, Leonardo did not work in the fast-drying and stable watercolor fresco technique of the time, but used experimental pigments directly on the dry plaster wall. Within five years of completion the painting began to flake. Da Vinci repaired the damage, but it continued to crumble. Further damage ensued when a curtain was hung over the painting for “protection,” trapping moisture and causing more paint to flake with every touch. Two hundred years later, Napoleon’s troops used the wall and mural for target practice. And Jesus has no feet in the painting, because around 1650 someone decided to add another door to the refectory and the only logical place was in the middle of the wall. The mural suffered other mishaps too. During World War II a bomb flattened most of Santa Maria, sparing only the wall that bore Leonardo’s painting. A miracle, perhaps? And for a time, the refectory was used as a prison. The fact that the painting survived at all, and in such good condition (although it did undergo restoration over a twenty-one-year period) is a miracle unto itself.

We arrived at the convent early, but already a crowd of eighteen had assembled for the next showing. After we cleared the dehumidifying chambers, we filed into the refectory. Too soon our fifteen-minute viewing time had come to an end. I tore my gaze from Leonardo’s spiritually moving piece to spend a few minutes admiring the painting on the opposite wall of the dining room—Crucifixion, which dated to the same period and was painted by Giovanni Donato da Montorfano.

The next morning, our last in Milan, we window-shopped for Italian furniture; we had no intent to buy, only to marvel at it and enjoy. Then we ordered espressos at a sidewalk cafe where we lingered to watch the procession of men and women who passed by, each flawlessly decked out in Milan’s finest—an ongoing fashion show.

At noon we took a taxi to the Milan airport, rented a car, and drove to Bellagio on Lake Como.