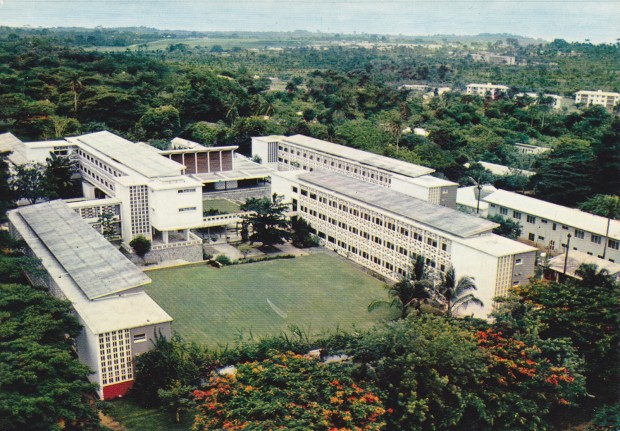 After we left Trinidad, we routed back to the United States to visit family, apply for visas, and get those obligatory vaccinations I remember all too well. With our departure for Nigeria imminent, we had the pleasure of receiving all of our shots in short order. The most impressive? The yellow fever injection. I swore the nurse was coming at me with a horse needle.

Pumped with enough vaccine to conquer any virus, and armed with visas, new passports, and a fresh supply of quinine tablets to combat malaria, we eagerly packed for Africa, only to be told to “cool your heels for an indefinite period of time.” Nigeria was in the midst of its first coup.

Two weeks later, the U.S. Department of State gave us clearance to travel, and on a hot, humid day in January we arrived in Lagos, then drove to Ibadan where we would live for two years.

The job in Nigeria entailed building an entirely new water supply system for the city of Ibadan, a USAID project in cooperation with the Western Nigerian Water Corporation.

My parents rented a two-story house in a subdivision of homes like any found in the US, except for an unusual twist. The former occupant, a government official, had “fallen at odds with the former political regime.” His life threatened, he fled with his family in the dead of night, leaving behind a completely furnished home, half-packed suitcases in the middle of the living room, and dirty dishes in the kitchen sink—all in place when we toured the home as prospective renters.

While my mother enrolled us in classes at the International School on the campus of the University of Ibadan, my father began work on a temporary manufacturing plant in the town of Asejire near the Osun River.

We hadn’t lived in Ibadan long before the farmer in my father surfaced. At our home on Commercial Avenue, we didn’t have the space to raise chickens, so Dad built his coops at work, and his small-scale chicken operation became a fringe benefit for his fellow Interpace employees while he was plant manager. When Dad was interviewed by a local newspaper, the reporter asked why he would go through all the trouble. He responded, “My parents raised chickens and turkeys for market, and I have never really gotten away from it.”

Trivia:  On a fishing expedition in Ibadan, my father caught a sixty-five-pound Nile perch. He sawed it into thirds, froze two parts, and baked the third. The meal was delicious.

Throughout the year Nigeria continued to experience political unrest.  In the second coup in July 1966, General Aguiyi-Ironsi was succeeded by Yakubu Gowon as the country’s new leader, and an unsettled peace engulfed the country.