Gardens and lake at Chateau Montelena.

Early the next morning, we made a quick stop at Starbucks for drinks, then strolled Fisherman’s Wharf. The only early risers were runners, cyclists, people making deliveries, someone power washing the sidewalks, a lone skipper loading fishing tackle into his boat, and us saying goodbye to the sea lion colony on our way to Ghirardelli Square to window-shop.

Bright sunlight warmed us as we walked back to the Hyatt to check out. Our destination? Napa for a half day of fact-checking and a full one of fun.

It was close to lunchtime when we drove into St. Helena, and we had our sights set on Gillwoods Cafe for lunch. After we ate I set to work on my to-do list.

Hilltop Cellars, the fictitious winery in Genocide, is a combination of wineries in the Napa and Sonoma valleys. The main house at Hilltop Cellars is constructed from memories of a Calistoga bed and breakfast I discovered years ago, but the Mediterranean-style house sold to a private party before I could book a reservation. The wine-aging cave at Hilltop Cellars was inspired by the hillside aging cave at the Kunde Family Winery in Sonoma Valley.

I returned to the location where the Mediterranean bed and breakfast had once stood, hoping to glimpse the house from the quiet lane that stretched in front of the residence, but no such structure was anywhere to be found along the dead-end road. I assumed it had been razed. Disappointed, I cruised the highways and byways of the valley, verifying facts, but there was little to update in regards to Genocide.

The sun was low on the horizon by the time we checked into our hotel, but as soon as we changed clothes we went in search of Ninebark. Again, don’t get excited about this restaurant. According to the news, it closed temporarily in July 2016 but is now permanently closed. Ninebark opened in late 2015 in the space formerly occupied by Fagiani’s Bar, the scene of an infamous murder. 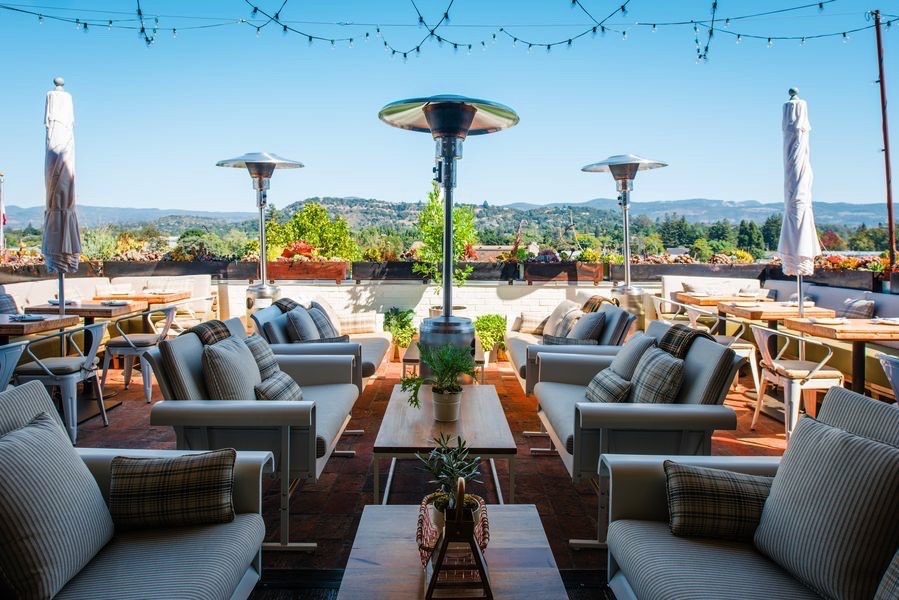 We arrived early at the restaurant and made our way to the rooftop bar to enjoy drinks, the view, and the warm evening, cooled by a soft breeze drifting off the Napa River. Within the hour we were seated downstairs in a quiet corner near the windows, and our server was prompt and friendly.

The menu headings at Ninebark were interesting: Provisions, Market, Appetizers, Plates, and Etcetera. For starters, we ordered salt cod beignets with garlic aioli and honey; meatballs of beef, pork, and lamb with goat cheese and a three-day red sauce; and Dungeness crab toast with Sichuan chili, pickled rose, and grilled citrus dashi. The portions were small and we shared. When eating out I will rarely pass up duck, and that night was no exception. It was charcoal roasted and served with lavender honey, heirloom spinach, and grilled lovage sabayon. Dave ordered the flatiron steak with fresh Napa chimichurri, koji barbecue sauce, and grilled baby scallions. For dessert I had a tawny port, and Dave, Calvados.

For the record, the best duck I’ve ever eaten was at the Black Cat Bistro in Cambria, California. Another dish I love is risotto, and by far the best was at the Boscolo Milano hotel in Milan, Italy. A close second was the seafood risotto at Artisan in Paso Robles, California.

We had another full day ahead of us with more fun was on the agenda, and while the reader may not find these wineries or restaurants in Genocide, look for them in future Darcy McClain and Bullet thrillers. 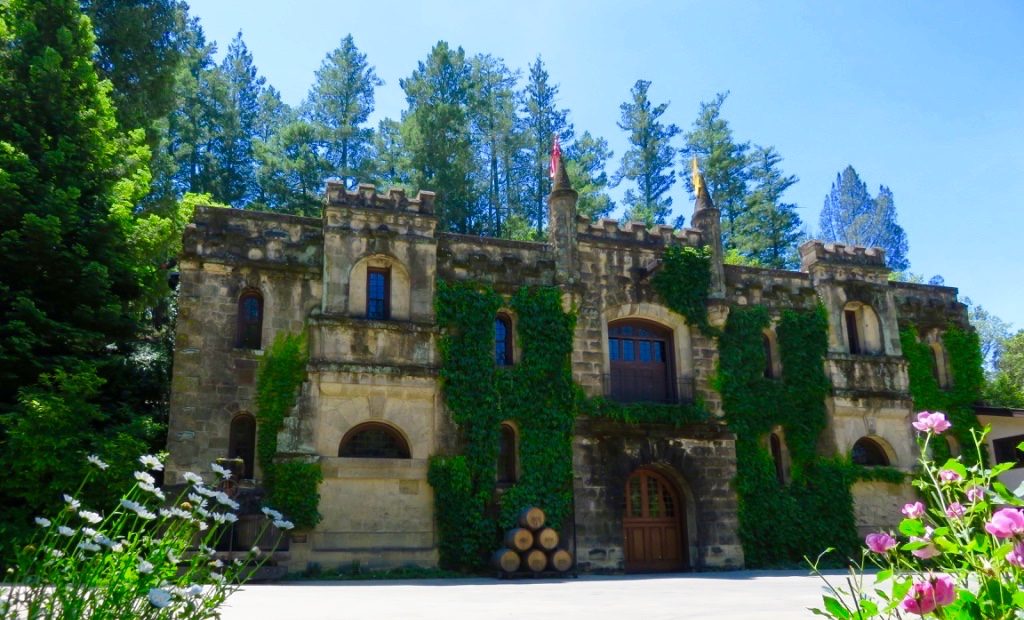 Chateau Montelena was the first winery we toured on our honeymoon and has remained a favorite—not to mention it produces excellent vintages. The Franks, who once owned the property, had emigrated from Hong Kong, which accounts for the Chinese gardens and Jade Lake, home to wildlife and weeping willows and a sanctuary for all, including people.

In the early 1970s, Jim Barrett bought the land, and under his leadership the vineyard was replanted, the chateau outfitted with modern winemaking equipment, and wine made for the first time. Today Barrett’s son Bo is at the helm of the family-owned business. 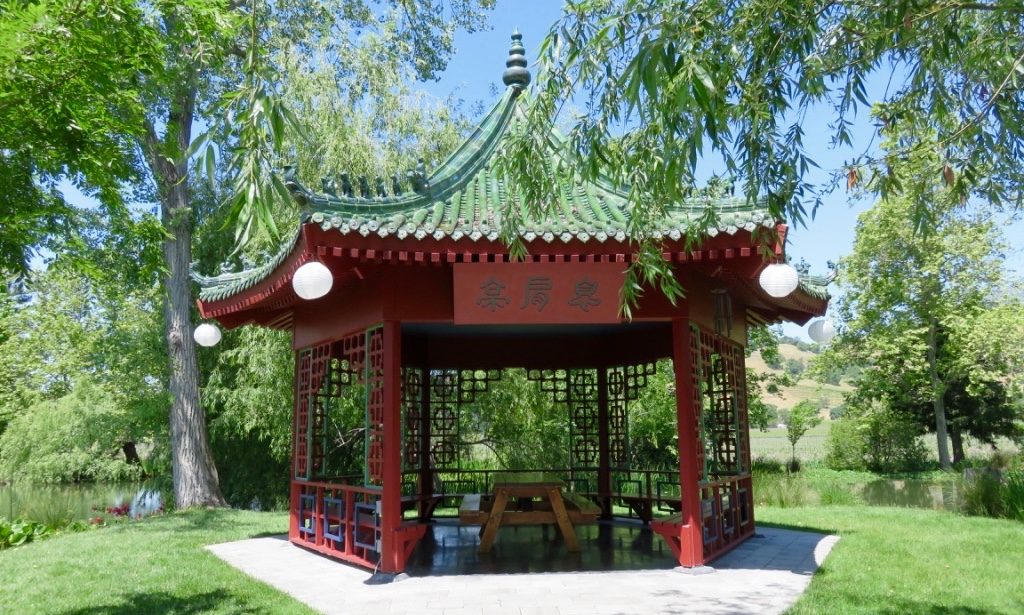 We didn’t have time to visit another of our favorites, Grgich Hills, but a stop at Chateau Montelena always reminds me of Grgich’s success as a winemaster and his impact on the wines of Chateau Montelena. In 1976, at a blind tasting held in Paris, a small number of Napa Valley chardonnays were included in the sampling. When the scores were tallied, the French judges were shocked to learn they had chosen a 1973 Chateau Montelena chardonnay crafted by Mike Grgich as the finest white wine in the world. Mike emigrated to the US from Croatia. You can read more about him in my blog post titled: EUROPE 2011: Dubrovnik to Split, Croatia. 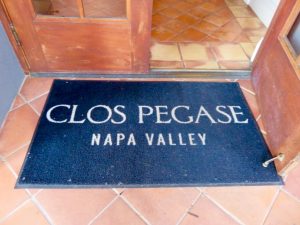 Clos Pegase, designed by architect Michael Graves, who passed away in 2015. Construction of the winery was completed in 1987, months prior to our first visit in the same year. The architectural design is postmodern with a touch of ancient Mediterranean: dramatic shapes and bold coloration, and the gardens are xeriscape. According to House and Garden magazine, Clos Pegase “has raised two ancient arts—architecture and winemaking—to a height that resonates with echoes of the ages.” While Dave joined the wine tasters, I shot photos. 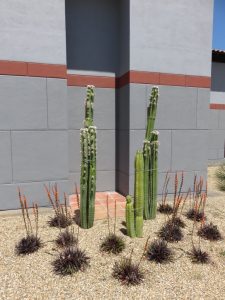 From Clos Pegase we drove to Rombauer to sit on the deck and savor a glass of wine while we took in the view. Koerner Rombauer was once a commercial pilot for Dallas-based Braniff International Airways, an airline I flew on many times from Miami to South America en route to Africa. Braniff went bankrupt in 1982. Our next destination was Sterling Vineyards. The starkly white hilltop estate was designed by Martin Waterfield and is a Mediterranean-style stucco structure inspired by the dwellings on the Greek island of Mykonos, where the winery’s expatriate owner once lived. Since its opening, Sterling has been sold several times and is now owned by Treasury Wine Estates, an Australian firm.

Famished, and with ten minutes to spare, we entered Morimoto. As the name implies, the restaurant serves Japanese fare. Our table had an unobstructed view of the Napa River. We sipped cold sake while we waited for our sushi and sashimi to be prepared and laughed about our experiences with San Francisco taxi drivers. 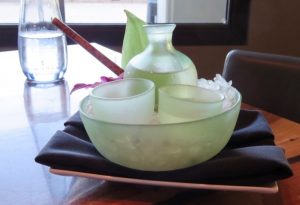 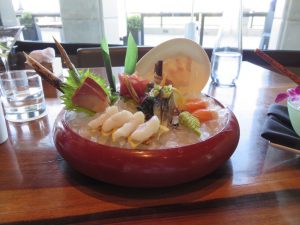 On the first night in the city, our cabbie had no idea where Volta was located and ended up dropping us off eight blocks from the restaurant. The next night we got wise and located Benu on our iPhone in case we had to give the cab driver directions. Good thing, because he had never heard of Benu. Politely, I asked, “Are you new to the city?” He replied, “No. I’ve lived here for fifteen years and I’ve always been a cabbie.”

As our last day in northern California drew to an end, we strolled along the riverfront to our parked rental and then retired to our hotel, for we had an early flight out of San Francisco back into DFW International.