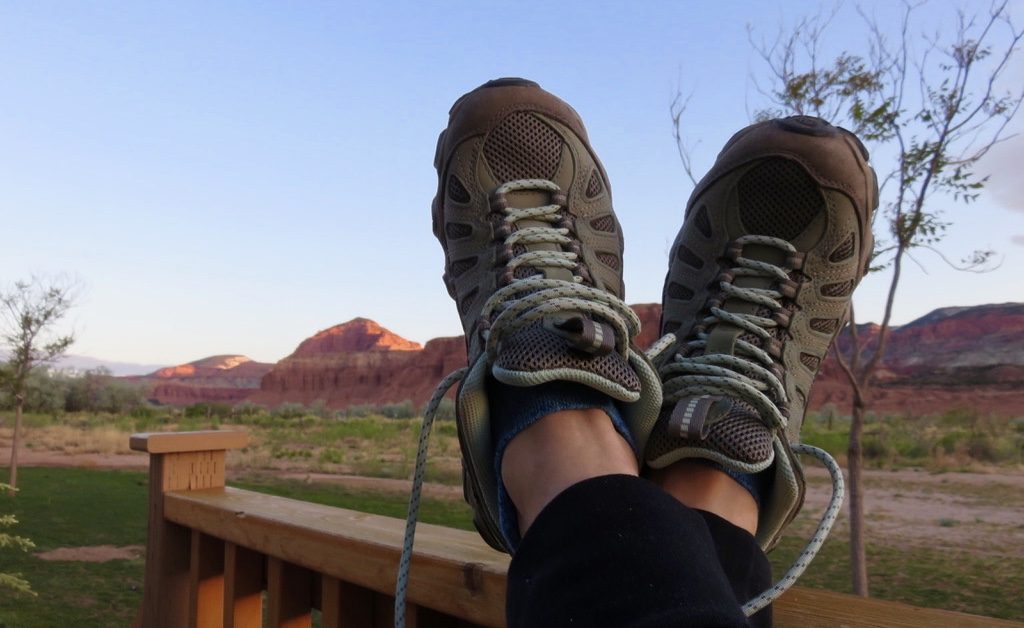 In my junior year at the University of Oregon, I fell in with a group of avid backpackers. Over the years, I had been on many day hikes: Toco, Trinidad; Namibia, Africa; and even the wilds of the Great Smoky Mountains in Tennessee, when I attended Lincoln Memorial University. But the backcountry aficionados I met in Oregon were hardcore wilderness trekkers, and I had no idea what I had signed up for when I joined them to backpack the Timberline Trail—a 38.3-mile hike around Mount Hood, rated difficult, and with an elevation gain of nine thousand feet.

My biggest mistake, besides tagging along with these veteran hikers? New Vasque hiking boots, and I was not in the physical shape of any of my fellow hikers. But I survived the first day, pushing myself to keep up with their vigorous pace, and I completed the fourteen-mile hike. When dinnertime rolled around, I opted for sleep over food; I’d need the rest to tackle day two.

During most of the four-day hike, we walked in silence, drinking in the beauty, lost in our own thoughts, and savoring the silence. I don’t recall encountering any other hikers until late on day four, when we neared Timberline Lodge where our route had begun and now ended. I do recall some nasty blisters and wondering why my feet were sweating so badly, never imagining that they weren’t sweating but bleeding. That aside, this was the start of a lifelong love for backpacking.

Flash forward to Utah. I’ve always wanted to hike the Mighty Five, so I booked the trip for late May 2018. I decided to fly into Salt Lake City International Airport (SLC) rather than Las Vegas, even though I planned to visit Zion National Park first and Arches National Park last. I don’t mind a long drive on the front end of a vacation, but I’m not keen on ending with one, and the distance from Arches National Park in Moab to McCarran International Airport in Las Vegas is six and a half hours compared to a three-and-a-half-hour drive from Moab to SLC.

We arrived in Salt Lake City at 11:30 a.m., picked up our rental SUV, and were on the road by noon, making good time. But as life will have it, the drive from the airport to our hotel in Springdale took well over seven hours. Around eleven that morning a Utah trooper was alerted to a man driving erratically in the southbound lanes of the I-15 freeway. Before the driver could be stopped, the car crashed and the man was ejected from the vehicle. He died at the scene, shutting down all southbound and northbound lanes while an investigation ensued. In two hours we had gone less than twenty miles, so we exited the I-15 and crawled through the congested city streets to the first restaurant we spotted—Kneaders Bakery & Cafe—and ordered lunch.

An hour later the side streets had cleared, and a mile south of the fatal accident, we jumped back onto the I-15 and drove to our hotel—Cliffrose Lodge & Gardens. The lodge borders Zion National Park and is on the Virgin River, a tranquil and beautiful setting with a backdrop of the red cliffs at Zion.

Parking in Springdale can be a problem, even at your hotel—more cars than parking spaces. On two occasions we had to ask the front desk to find parking for us. Evidently, six cars in the hotel lot belonged to locals who couldn’t find parking on the street. So the best way to get around town is to use the free Springdale Shuttle. And to see the park, take the free Zion Canyon Shuttle, which leaves from the Zion Canyon Visitor Center. For more information on both shuttles and times and locations of pickup and drop-off, click on this link: https://www.nps.gov/zion/planyourvisit/shuttle-system.htm.

Our first evening in town, we ordered takeout, bought a bottle of wine, and enjoyed a relaxing dinner on our patio overlooking the Virgin River. As dusk descended, we watched mule deer munch on the lodge’s lawn and nibble shrubs, until the sun sank low over the red cliffs of Zion and a waning crescent moon graced the darkening skies. 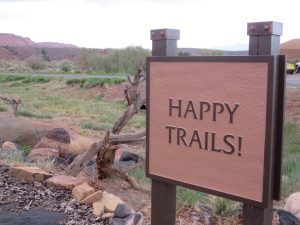