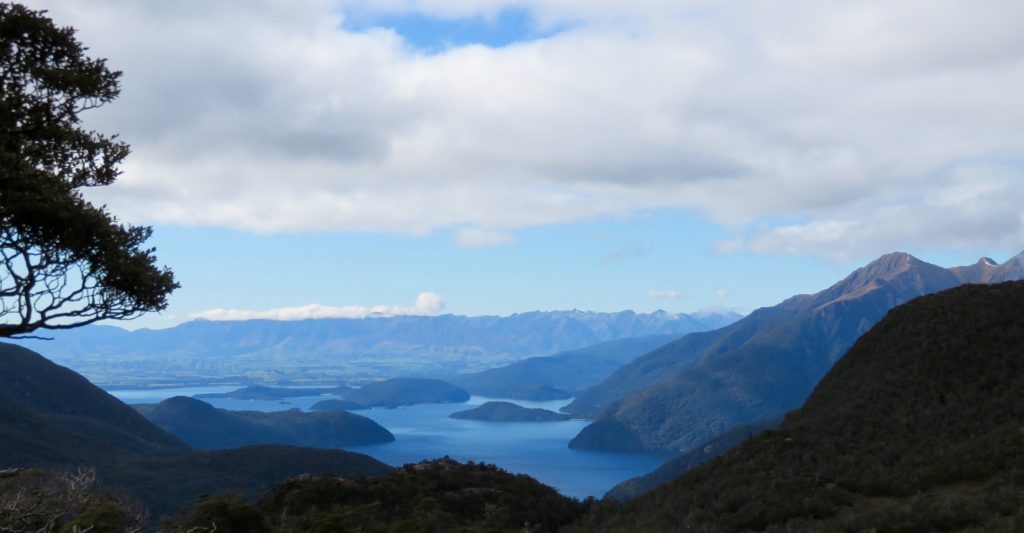 Although I am not a fan of small aircraft, which definitely includes helicopters, I couldn’t contain my excitement about a flyover of Doubtful Sound and Milford Sound on day three in Te Anau. This would be my first helicopter ride. Alan’s staff had arranged the aerial tour, and our pilot would be Michael Hayes from Southern Lakes Helicopters. His father owns the company, and he learned to fly at a young age.

Mid-morning, Michael landed his chopper on the front lawn of the Fiordland Lodge, and we walked out to greet him. Joining us on the ride were Bruce and Jen from Melbourne, Australia. Before we took off, Michael told us the weather wasn’t cooperating and the sounds would be “too socked in” to see anything, but he would still take us up, weather permitting.

Armed with our camera gear, we boarded, belted ourselves in, and donned earphones before we soared skyward and glided over Lake Te Anau. I didn’t expect the ride to be as smooth as it started out. Michael said we might encounter some choppy weather, but he had made this flight so many times that he had learned to expect sudden current changes. His tone was so confident that I relaxed and concentrated on taking photos.

Jen, my seat companion, couldn’t have been more gracious, moving back when I wanted to take a shot from her side of the craft and I returned the favor. David sat in the front seat with Bruce, who was equally happy to share the sights for a photo op.

As a mountain loomed into view, I kept thinking, “Okay, Michael, pull up. Pull up!” But he circled, came alongside it, hovered, and landed on the side of the mountain in a small clearing. Exhilarating, to say the least. We spent some time photographing the magnificent views and were preparing to leave when clouds began to form over the sounds below. Michael said we should head back because “the weather was not the best to be flying in, period.” 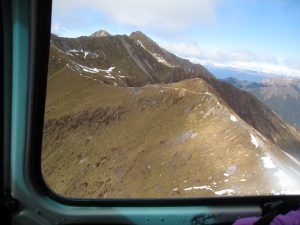 On the return trip, we flew over the Kepler Track, which traverses the ridgeline of Mount Luxmore, and I made a note to put this tramp on my must-do list for our next visit to Te Anau. The alpine and lake views from this ridge had to be absolutely stunning. You can barely see the hiking trail along the top ridge of the photo.

Michael also suggested the Milford Track, considered “the finest in the world,” for tramping. According to the trail description, it starts out as a “limbering walk,” but a side track that leads to Sutherland Falls is one of New Zealand’s highest trails at over 640 feet.

Although the “soupy” weather had ruined our plans to see the sounds, we had taken some great pictures and I’d had a wonderful time on my first helicopter ride. I would do it again, and hope for better weather. 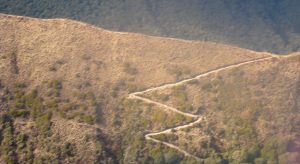 Another photo of the hiking trail.

For lunch, David and I drove into Te Anau and found a small pizza place. We ordered several slices and shared them outdoors, basking in the now-sunny day. We had just finished eating when Bruce and Jen waved as they entered the same pizza place. Te Anau is a small, quaint town, and we spent the afternoon sightseeing and shopping for souvenirs.

That evening, back at the lodge, we were sipping predinner drinks before a roaring fire in the lodge’s living room when Jen and Bruce walked up to the small bar near the dining room and ordered drinks. They found seats at the far end of the room and opened their laptops. Curious as to what photos they had taken during our helicopter ride, I approached them. They are a friendly couple and were happy to share their photographs. I asked Bruce if I could use some on my blog when I decided to post about my trip. He said he would go one better—burn a DVD and mail it to me. And he kept his promise, along with sending a video of our helicopter ride. I had no idea he had recorded our flight. I will post his photos and video at a later date. Stay tuned. 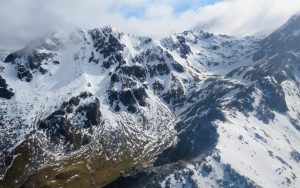 The four of us had dinner together and we were still seated, chatting away, long after the rest of the guests had departed. The waitstaff were patient and worked around us, clearing tables and resetting them for breakfast. But we still had plenty to talk about, so we moved to the fireplace seating and sipped port until late into the night. No, I do not recall what we ate for dinner. The four of us were too busy talking.