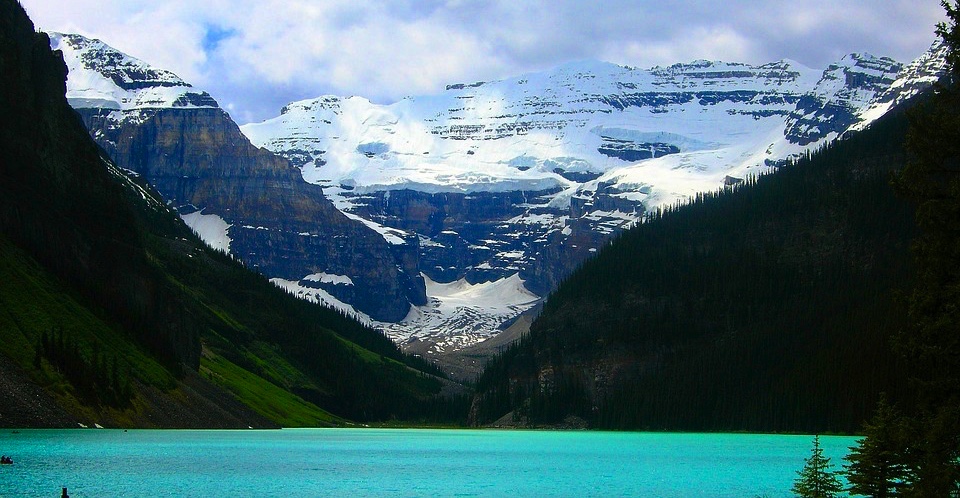 Late morning, we drove from the Fairmont Jasper Park Lodge to the Fairmont Chateau Lake Louise, a beautiful three-hour drive through Jasper National Park into Banff National Park. We were less than a mile from the Jasper lodge when I spotted something black out of the corner of my eye. Bear! David slowed down and pulled to the shoulder of the road. In a lush meadow, which sat about thirty feet below the highway, a lone black bear was foraging. He paid us no mind, busy searching for something to eat. We snapped photos, until six vehicles joined us. I was pleased to see that no one attempted to approach the bear. In fact, everyone spoke in low tones as to not spook him.

At the hotel check-in counter, there seemed to be a problem with our room reservation, so I waited in the lounge area with our roller bags while a guest service employee went to find the hotel manager. Soon thereafter, David waved me over to the registration desk. The manager informed us that since we had “suffered an issue” with the hotel in Vancouver and had booked exclusively with the Fairmont chain on our Canadian trip, they wanted to upgrade our room. David told him that the Fairmont had already done so in Whistler and there was really no need to upgrade us again. But he insisted.

Our impressive two-level accommodation was the Belvedere Suite on the top floor of the hotel, with over a thousand square feet and two private covered balconies—one overlooked the grounds and the other the lake. The spiral staircase in the penthouse suite led to a secluded bedroom, and the luxurious bath with glass walls opened to stunning views of Lake Louise and the Victoria Glacier. 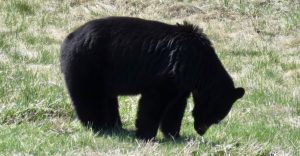 After we settled into our room, we strolled the trails around the hotel and the lake. It pays to do your research before you go, I reminded myself, as I was quite surprised to see Lake Louise covered in ice in May. I learned much later that many visitors plan their trip in early June when the Rocky Mountain lakes thaw—the best time to snap pictures of the turquoise water. The striking blue-green color, also seen in New Zealand’s lakes, comes from silt-like rock flour carried into the lake by ice and snowmelt from the surrounding glaciers. The minute particles of silt become suspended in the water, refracting blue and green wavelengths of light.

Every year, the lake’s thawing is a highly anticipated event with many Fairmont Chateau employees participating in a lake-thawing lottery. Each employee places a small bet and picks a day and time, a.m. or p.m., when he or she thinks the lake will clear of ice. Depending upon the weather patterns, Lake Louise has cleared as early as May 30 and as late as June 17.

For dinner, we ate fondue at Walliser Stube in our hotel and watched the day slip into night over Lake Louise.

Early in the morning, we reboarded the Rocky Mountaineer for the ride from Quesnel to Jasper.

I planned to spend most of the day outside on the downstairs observation deck of our railcar, snapping photos, but it began to rain as we left the rail station and chugged past the lumberyards. Michael, one of our onboard crew and also a professional photographer, told me we still had a lot of climbing to do and the best shots were yet to come. He suggested that I go down to the dining car for breakfast, so I took his advice http://michaelbednar.com

The inclement weather followed us from Quesnel to Prince George as the train charted a course close to the Fraser River. The weather improved as we rolled into the quaint village of McBride, BC, and cleared as we crossed provinces—from British Columbia into Alberta. As we drew near the town of Jasper, we spotted a black bear minding his own business and not the least bit interested in the passing train, although the passengers burst into an uproar of “Bear, bear, bear.” And the cameras came out in a flash. Sorry, I couldn’t resist the pun. I was too slow on the draw and missed my shot, but I would get my chance later in the trip.

We disembarked in Jasper and boarded a bus to the Fairmont Jasper Park Lodge. Those passengers continuing on the train the next day were booked into the main building of the lodge. We planned to stay two nights in Jasper and had reserved a bungalow near the lake. When we checked in with reception, they advised us to stay clear of the roaming elk, as many females had young with them. In fact, we had to dodge three on the way to the room and wait while another moved away from the front door before we could unlock the bungalow. They were a pleasure to see.

We had reservations at the Moose’s Nook Northern Grill in the lodge, but it was closing as we arrived at the host’s desk. She apologized, but we really weren’t up for a big dinner, as we had certainly been well fed on the train. We sat in the Emerald Lounge, ordered a bottle of wine, and snacked on substantial appetizers as we sat near a roaring fire.

Pardon the glass glare on some of the photos taken aboard the train. Unavoidable, unfortunately.