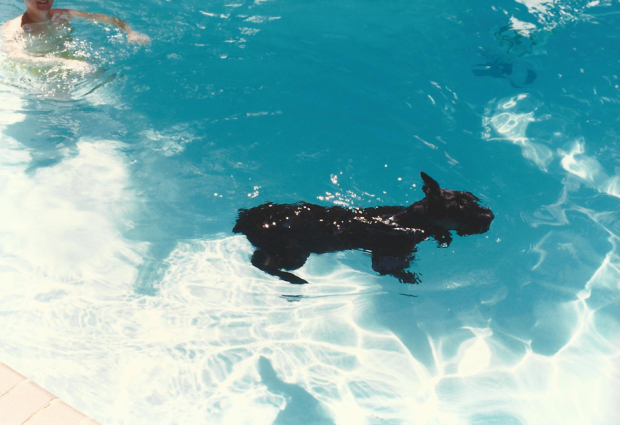 Even at three months of age, Shotz was willing and eager to respond to most commands except for two, “come” and “stay,” which she never obeyed. But I blame myself, not her. If I had practiced my own motto of the three Ps— patience, persistence, and practice—I know I would have been more successful.

The first two times I fed her, she knocked her feed bowl out of my hand, scattering food in all directions. This is when I taught her to sit and to wait until I gave her the command to eat. She looked so adorable sitting patiently, her rump moving back and forth as she eagerly awaited my release command. When she obeyed, I was so happy that I kissed her between the eyes and said, “Good, girl.” Years later, while I was traveling and my husband was watching her, he complained that she wouldn’t eat. I asked if he’d kissed her between the eyes before he gave her the okay command. He said, “No, you never mentioned that.” From then on, she would wait patiently for her kiss before eating.

At four months old, on a cool and rainy April weekend, Shotz accidentally discovered our swimming pool while playing ball. I rolled her ball toward her. She missed it, and the ball landed in the pool. Without hesitation she jumped in to retrieve it. We stood there, stunned at how readily she took to the water, dog paddling as if she’d been born to swim. Concerned, we tried to coax her to the edge of the pool or to the steps, but she ignored us. She continued to paddle in a circle around the deep end of the pool, content to swim at a slow and methodical pace until she showed signs of tiring. She found the steps on her own, climbed out, and shook off, dousing us in cold water. In the months to follow, especially in the dead heat of a Texas summer, we learned that our California girl was a true water baby, or as a friend called her, “the Esther Williams of giants.”

When she was five months old, I enrolled her in puppy obedience classes, more for fun and to burn off her energy than anything else. As it turned out, she was more interested in playing with the other dogs than listening to commands. I wished I’d had a dime for every time the teacher shouted, “Pat, get your dog under control.” But Shotz and I didn’t care. We were together, and not much else mattered.

And so life with our giant continued. I mopped floors and toweled off her beard, which soaked up water like a sponge and dripped puddles everywhere. I vacuumed black dust bunnies from the corners of the rooms and along the baseboards. I swept up dirt and sand and picked up the occasional gift she brought indoors. I’m not squeamish, so I didn’t mind disposing of her half-dead mice and rats. But most of all, I learned to be patient with her persistent demands for attention and her high energy level. At first, I thought: One of us will not last. But as time passed, I fell even more in love with her, and the time we spent together was priceless.

One morning before dawn, I let Shotz out to do her business, and I went back inside to get my coffee mug. I had my hand on the doorknob when I heard a muffled cry. I ran into the backyard, calling and searching in the murky light for her but didn’t see her anywhere, and she didn’t respond to my calls. After a few minutes, she came toward me with her ears down and her muzzle lowered. I threw my arms around her and hugged her, puzzled by the sticky smears she left on my arms. In the rising light of day, I noticed my white bathrobe was streaked with blood. Fighting panic, I checked her over and noticed two long claw marks on her black nose. She broke from my grasp and returned to her attacker, barking and snarling at the angry opossum trapped under a wooden pallet. But nothing would convince my fearless girl to give up the fight. I leashed her and practically dragged her into the house.

Still on my guard after the opossum attack, I kept a watchful eye on her the rest of the day. Late in the afternoon, I put her in the backyard and hurried into the house to retrieve my cell phone. I pocketed it and noticed her sitting contently at the backdoor. Normally, she would beat up the door if I didn’t immediately let her in. My cell phone rang. I was checking caller ID when I opened the door. She came charging into the house, obviously excited, and behind her, to my surprise, trailed three mini schnauzers. I said, “Sit,” the command intended for her, but all four responded. I stifled a laugh, then checked the visitors’ dog tags. The band of three belonged to our new neighbors. Shotz wasn’t happy about losing her new friends so soon after they dropped in for a visit.

In her first year, I also learned about her high prey instinct. If it came into her yard, it was fair game: squirrels, mice, rats, cats, opossums, and skunks. She discovered how to corral an animal in the corner of the back porch, then pounce on it, the result always fatal. Fortunately, she learned to avoid skunks after being sprayed twice, and cats were too quick for her. And as a feline lover myself, I certainly did not condone attacking cats. However, as she grew older, her obsession with cats grew as well; once she even attacked wooden bookends carved into the shape of cats.