As you near Abiquiú you enter a landscape rich with vast vistas, multicolored sandstone canyons with towering red and yellow cliffs that soar to fifteen hundred feet, and rocky, table-topped mesas in sharp contrast to the lush grasslands and the waters of the Rio Chama, a major tributary of the Rio Grande. It’s no wonder famous artist Georgia O’Keeffe fell in love with the land. The village will make its debut appearance in CLON-X  book four in the Darcy McClain and Bullet Thriller Series.

I first set foot in Abiquiú in 1986 and was instantly captivated with the desert landscape, and my love for the region has never waned. The town is located eighteen miles north of Española on a terraced, rocky mesa at an elevation of over six thousand feet and overlooks the Rio Chama. The Abiquiú Genízaro Land Grant was given to the Spaniards and the genízaros (Native American slaves) jointly, and is one of the last Spanish-American community grants still functioning and owned by the residents. Photo: Bed and Breakfast in Abiquiú. 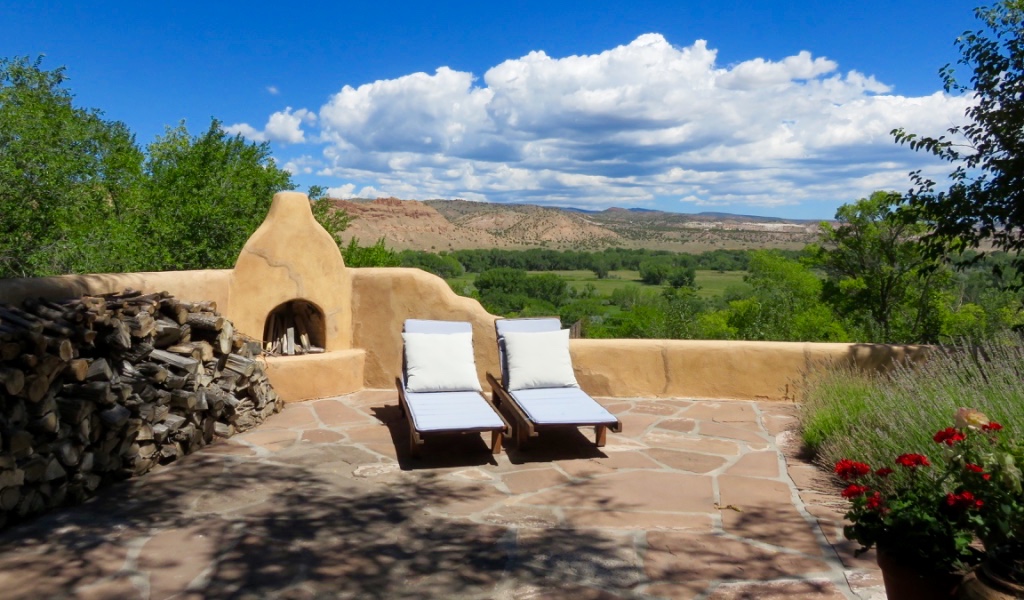 Abiquiú was the gateway for pioneers headed west on the Old Spanish Trail, the historic trade route that connected the northern New Mexico settlements of Santa Fe to those of Los Angeles and southern California: seven hundred miles of high mountains, arid deserts, and deep canyons, and one of the most arduous pack-train routes in the entire United States—an exhausting eighty-six-day trek. In the 1750s a new church, Santo Tomas El Apostal Church, and a convent were begun. Upon completion in the 1770s, the community was placed under the spiritual ministry of the Franciscan friars.

In and around Abiquiú are several interesting attractions, something for almost everyone. Abiquiú Lake, a reservoir, was created by damming the waters of the Rio Chama. The recreation area is managed by the US Army Corps of Engineers, and the activities include camping, hiking, swimming, boating, and fishing.

Prefer seclusion? Then head for the Monastery of Christ in the Desert, a Benedictine monastery set amid miles of undisturbed wilderness. Their guesthouses and ranch houses are available for a two-day, two-night minimum stay with a suggested donation of ninety dollars per night. Meals are simple and mostly vegetarian fare, and are shared with the monks in the refectory. All meals are enjoyed in silence, except during table readings by the monks.

Since water sports and solitude weren’t on my agenda for the day, but photography certainly was, I drove to the Echo amphitheater, about four miles up the road from Ghost Ranch, only to discover that the natural amphitheater was closed due to filming of Hostiles, a frontier epic. Disappointed, I motored back to Ghost Ranch where the film crew had set up camp, but the ranch was open to tourism, so we stopped to take photos and enjoy the scenery. 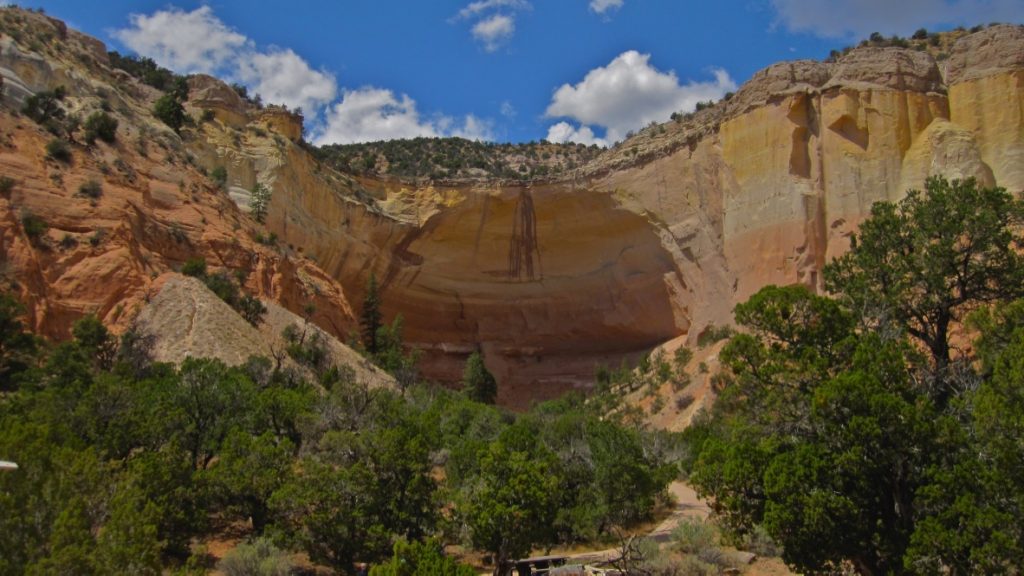 Ghost Ranch was part of the Piedra Lumbre Land Grant given to Pedro Martin Serrano from the King of Spain in 1766. When cattle rustlers started hiding their stolen cattle in the box canyons, they discouraged nosy neighbors by spreading rumors that the land was haunted by evil spirits. Rancho de los Brujos (Ranch of the Witches) evolved into Ghost Ranch. In 1936, Arthur Pack, publisher of Nature magazine, bought the ranch. Today, most people associate it with Georgia O’Keeffe.