Shotz: Living With a GIANT 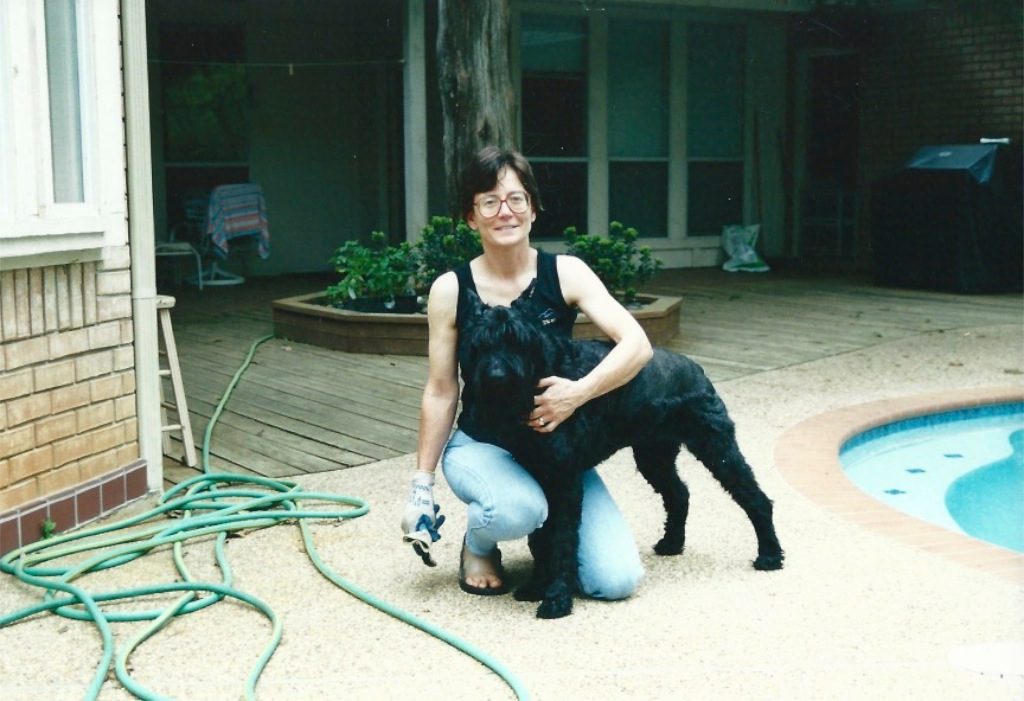 Shortly before her first Christmas, Shotz developed a bad case of diarrhea. We racked our brains trying to think of what she had eaten. The following week the situation worsened. Nothing we tried worked. The condition continued, and her water consumption greatly increased. Now we were really concerned, so I had Dr. C, our vet, test a stool sample. It was negative. No parasites. No infections. Nothing. She prescribed metronidazole. It seemed to work, but the minute Shotz finished the prescription, the diarrhea returned.

When she didn’t improve, I was determined to resolve the problem, so I spent an entire day watching her. Around noon, while I was on the telephone, she slipped out of my study and disappeared into the kitchen. I followed but kept my distance. The door to our pantry had a single lever, not a knob. She leaned on the handle with her muzzle until the door popped open.

On the lower shelf, hidden behind a container, sat an open bag of chili-roasted nuts someone had given us as a gift. They were so hot, we couldn’t eat them, but evidently someone loved them. Shotz helped herself, backed out of the pantry, and nudged the door shut. Then she made a beeline for her water bowl. This is why she became known as The Trickster.

One Sunday we made a run to Home Depot to order blinds for our new house and took Shotz along for the outing. My husband was certain we had been neglecting her. I guess those ninety-minute morning walks and two-hour romps in the swimming pool, not to mention an hour of playing ball every day, didn’t count as paying attention to her.

As soon as we arrived at Home Depot, Shotz was surrounded by kids. She was good with them until one started to shriek at the top of his lungs. Then Shotz headed in the opposite direction, and I went with her.

In the hardware section, my husband deserted us and I headed for the window coverings department, where I tied Shotz to my chair with a long lead my husband had custom-made for her. I didn’t trust the leash because twice Shotz had managed to twist free of the clasp connected to her harness. Hubby had said when told this, “That’s impossible.”

While the saleswoman was typing up my order, I thought, “Gee, Shotz is being so quiet and good.” When I looked down to praise her, I saw her lead lying on the ground with no giant attached to the end. I jumped up and said loudly, “I have to leave.” The woman typing my order must’ve thought I was having a seizure of some kind. I could barely spit out that I had to go find my dog. Now.

As I ran through the store, I had visions of her slipping out the front door and a car hitting her in the parking lot. Frantic, I jogged down the center aisle of Home Depot shouting to everyone I saw, “Have you seen a big black dog?” No one said yes, so I raced to customer service and asked them to announce over the paging system that if anyone spotted a big black dog to grab her by her harness and hold onto her until I got there. The woman behind the counter looked at me in horror. “Grab her? A big black dog? Are you sure?”

“Yes. She’s friendly,” I insisted. Skeptical stares all around. “Okay, well, at least post a person at each door. If she gets out of the store, she might be killed. Please.” They posted a person at each exit.

By now, panic had set in. Then I heard marvelous words over the PA: “Big black dog on aisle five.” I bolted and skidded into aisle five, my eyes sweeping the passage. No black dog. My heart was pounding so hard, I barely heard it when someone bellowed over the address system, “Black dog seen in lumber. Moving fast.”

I sped down the hardware aisle toward lumber and zipped around the corner so fast, I almost tripped over my own feet. After my recent knee surgery, I had no idea I could move this fast, but I had the right incentive. I kept wondering why my husband hadn’t joined the chase, and until then, I hadn’t thought to call his cell. I just wanted to find Shotz—and quick. I made three trips through the aisles in lumber, but no Shotz. I finally flipped open my cell phone to call Dave.

A loud bark. My heart soared. I flew into the next aisle but still didn’t see her. I hurried past the stacks of fence slats, stopped in midstride, and backed up. A big black mass came into view, and that docked tail wagged back and forth so fast, it looked as if she were about to take flight. I climbed onto the pile of fencing, seized hold of her harness, and yanked her out.

The minute I set eyes on her, I burst out laughing. Her ears, muzzle, and beard were covered in dust and cobwebs. What a sight. I started to pick the spiderwebs off her, then reached under her beard to brush off some dust. Something warm and soft touched my hand. I pulled back, wondering what was wiggling in her mouth.

“Okay, drop it.” Shotz looked up at me with those big brown eyes as if to say, “Ah, Mom, can’t I keep it?” Before I repeated the command, she shook her head from side to side, dropped the rat on the floor, and pranced off, obviously proud of herself. I sprinted after her and quickly leashed her, just as my husband came around the bend and asked, “Hey, where have you two been? I’ve been looking for you.” He unplugged himself from his MP3 player and never plugged in again, at Home Depot, or in public period.

All giant owners (all dog owners, for that matter) are fortunate to have a wealth of interesting stories to share, laugh about, and sometimes cry about. We are fortunate, for even when our dogs leave us we have fond memories to draw upon despite how painful it is to see them go. They change our lives forever and always for the better.