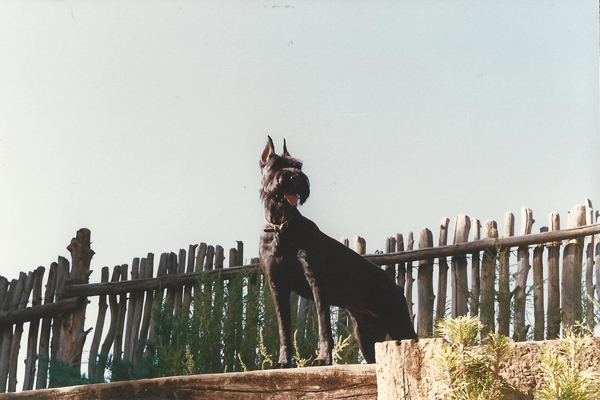 With dusk upon us, our fear bordered on panic as we searched frantically for Shotz. We pondered our next move. No way we’d leave the park, even if we were required to. We would suffer the consequences. I wasn’t about to leave her behind.

“What about coyotes?” I said, just as we heard a short bark. We both jumped off my 4Runner and hurried to the back hatch where the sound had come from. There sat Shotz, looking up at us as if to say, “Well, are we going to be here all night?” Relieved and weary, we drove back to Farmington, grabbed takeout at a nearby restaurant, and called it a day.

Up early, we motored out of Farmington along Highway 64 to Chama, storm clouds chasing us all the way. We lunched in Chama at a restaurant near the Cumbres and Toltec Railroad station, which was built 113 years ago. The sixty-four-mile steam railroad is jointly owned by New Mexico and Colorado and operates passenger trains between May 24 and October 19. Over the years, I’ve taken the train trip several times and highly recommend it. From Chama, we continued on to Taos, our destination for the next four days.

Everywhere we went in Taos, Shotz turned heads or created a traffic jam. “What is she? Some kind of schnauzer, right?” At least they knew she was a schnauzer and not a Doberman or a Bouvier, or as someone once asked, “Big Scottie, right?” People honked and gave us a thumbs-up or pulled to the curb for a closer look. Even in the parking lot of the grocery store, cars would draw alongside us for a glimpse of her. In return, we received plenty of unsolicited recommendations on the best restaurants in town and some great places to stay, but we already had room reservations.

We rented from a Houston couple who had moved to Taos years prior. They had purchased a two hundred-year-old adobe and converted the garage into a twelve hundred-square-foot guesthouse. The spacious accommodations were ideal for our needs and for Shotz, as the fenced property allowed her to run free and bark at the passersby on busy Ranchitos Road. The side yard was terraced with railroad ties, and she loved her high lookout post. And conveniently, the guesthouse was an easy two-block walk to the main plaza, shops, and some of the best restaurants.

Four days later we left Taos and cruised onto Highway 68, headed south for Santa Fe, where we planned to stay for three days. We rented a house a few blocks from town. When we arrived, we discovered “the house” was actually a duplex and the backyard was a “shared” yard, which Shotz certainly didn’t mind, but we did.

The adjacent owners had two small dogs and a dog door. Gregarious Shotz loved the idea of romping with her own kind, but the two chihuahuas were very territorial and not the least bit happy about this large black dog invading their property. They barked, snarled, and growled while Shotz sat there and looked at them as if to say, “Hey, don’t you want to play?” But when they started nipping at her hind legs, we questioned whether she would see her new friends as prey.

Tired of the nipping, Shotz chased after the chihuahuas and nipped back. When they ran for the cover of their dog door, she followed, barely making it into the house through the tight opening. I stuck my head through the pet door to coax her out. Thank goodness the owners worked and weren’t home. After a lot of encouragement, she came bounding to me, leaving the two chihuahuas perched on the back of the sofa, snarling and growling.

On our last day, we crated Shotz in the rental and went to breakfast. On the way back, we strolled through the farmers’ market in Sambusco. As we turned the corner into the driveway of our rental house, the first thing we noticed was the missing blinds from the front windows. Apprehensive, we opened the door to find an exhausted-looking Shotz stretched out on the flagstone floor. How she had managed to break out of her crate, I had no idea, as I swore I’d latched her in.

Four of the blinds hung cockeyed on the windows, and the flimsy sheer on the door had been shredded. We assessed the damage and decided it could have been worse. She hadn’t chewed the legs on any of the tables or the furniture, nor had she destroyed anything else, so we counted our blessings, forfeited our pet deposit, paid for the blinds, and left Santa Fe for the return trip to Texas.

As we tooled along 285, one of my favorite highways in New Mexico for its beautiful scenery, I wondered how Shotz had broken out of her crate. Then I recalled a similar event a month ago when I’d left the house to grocery shop. I put her in the crate and latched the door but came home to find her waiting in the kitchen.

Weeks later, I finally solved the puzzle. I put her in the crate, latched it, and pretended to leave. I crept into the backyard and onto the porch to spy on her. Through the blinds, which were slanted downward so I had a good view of her crate, I saw her stand, then settle down for what looked like a nap. Wonderful. But I remained patient.

After a long five-minute wait, she stood up, stretched her legs out, and arched her back, pressing it to the top of her wire carrier. Then she rocked the crate back and forth until the latches sprung open and she broke free. It was just like a giant: intelligent, persistent, and ingenious—not the breed for everyone, and certainly not the breed for a first-time dog owner.

← Shotz: Her First Road Trip Shotz: Living With a GIANT →