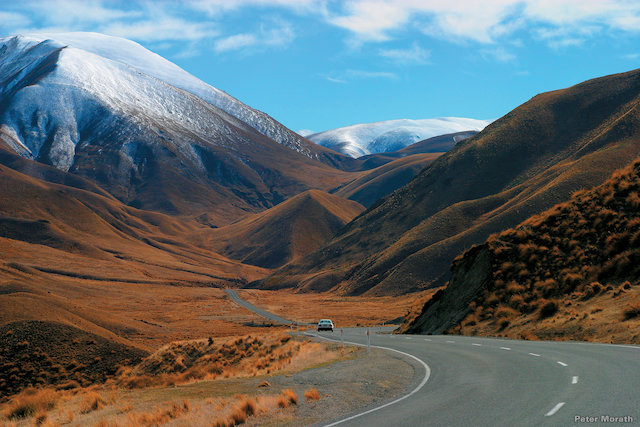 Over breakfast, we chatted with Jo and Peter about our plans for the rest of our trip, and then left the dining room to gather our roller bags and load them into the rental car. We had packed the night before, eager to get an early start, as we had over a four-hour drive from Twizel to the Fiordland Lodge in Te Anau. And with all of the beautiful scenery along the way, I would certainly be stopping to take my share of photos.

We thanked our hosts for their hospitality, and we would definitely recommend Matuka Lodge to anyone. I felt as though I was leaving family when I hugged Jo goodbye. I’d miss her. As I climbed into the passenger seat, she mentioned the possibility of snow in Te Anau. Snow? Surely, the weather forecast had to be wrong. I tucked Jo’s recipe for her deliciously moist fruitcake into my carry-on bag and we drove away.

Driving through the town of Omarama, we checked the skies for gliders but saw none.

Crossing the Lindis Pass is like stepping onto another planet for a brief period. The undulating mountain slopes are covered in red tussock grass, a plant native to New Zealand. It’s a graceful evergreen perennial that forms a dense, arching tussock of coppery-red blades. I was quite captivated the first time I saw the grass and even more so during this trip. As the crosswinds blew fiercely across the pass, ruffling the arching grasses, the clumps reminded me of warriors out of a Star Wars movie marching to battle.

The highway started to hug Lake Dunstan as we made our way toward Northburn. We were tooling along at a moderate speed when we noticed a small sign alongside the road. In unison, we said, “Cloudy Bay.” David made a U-turn. The Cloudy Bay Shed is some shed. The location is picture-perfect, the staff friendly and helpful, and I love their wines, especially their sauvignon blanc. One of my favorites. We bought a sauvignon blanc and a pinot noir and chatted for a while about wine before we sped back onto the road.

Our next unplanned stop was the Roaring Meg lookout on the Kawarau River. The hydro power station was built in 1934 and is fed by the Roaring Meg dam. There are different stories as to how the hydro station got its name, but I was told the station was named after a risqué redheaded barmaid who worked in the area during the gold rush days.

For lunch, we returned to the place we had eaten in 2014—the Gibbston Valley Winery. We ordered several starters and tucked into those. Finished eating, we were waiting for our bill when a familiar-looking couple walked into the restaurant, our hotel neighbors from the George in Christchurch. They had booked a winery tour and were headed back to the US the next day.

On the outskirts of Frankton, we drove past the Remarkables Ski Area. I thought, Shame the slopes don’t have more snow. Be careful what you wish for, because the weather was about to change. 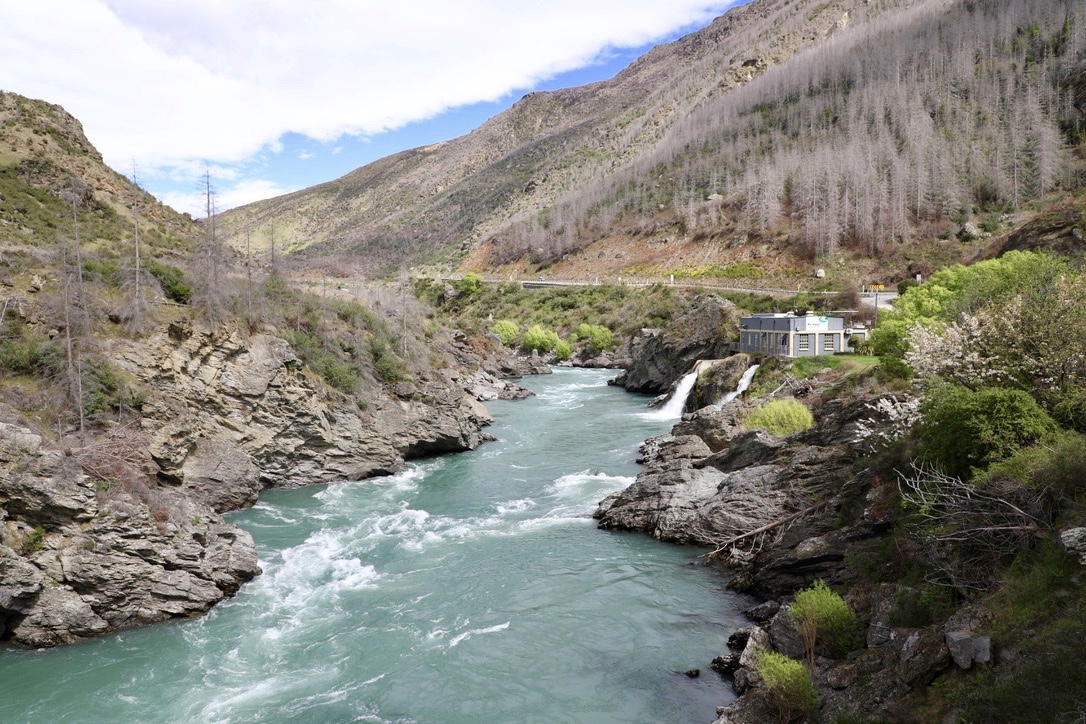 Roaring Meg on the Kawarau River

After a brief stop at the Devil’s Staircase Lookout Point in Kingston, we motored on in earnest. We still had another hour and a half of driving, and we wanted to reach the Fiordland Lodge by dinner. We had stayed there in 2014 and looked forward to seeing Andy, the lodge manager. We also knew a roaring fire in the living room, libations, and a good meal awaited us.

I took a few shots of Lindis Pass, but none were as good as the one taken by Peter Morath, courtesy of http://www.prints.co.nz