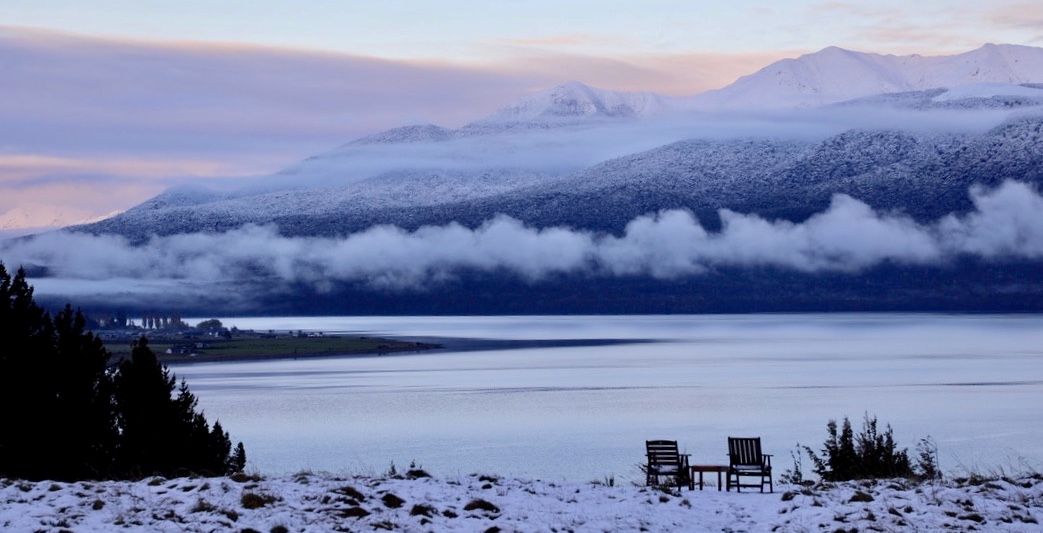 On our previous trip to the South Island in 2014, we had reserved a helicopter tour of Doubtful Sound, but the day had dawned gray and cloudy and the skies became more threatening as the morning wore on, forcing us to cut our chopper ride short.

Today we had high hopes, but they wouldn’t last. Again, the day broke with dark skies, and by mid-morning, just as the weather forecast had predicted, fat, fluffy snowflakes fell from the sky.

By noon, a honeymooning couple at the lodge asked Andy to check if the Homer Tunnel into Milford Sound was open, as they had reservations at a hotel there for the night. Andy informed us the tunnel was closed due to a high risk of avalanches, and no one was sure when it would reopen.

Normally, the lodge offers two meals, breakfast and dinner, but due to the weather, Andy had the chef rustle up lunch for the five of us who had remained at the lodge. Most of the departing guests had left early, before the snowfall and when the highway was still clear.

Conditions worsened as the day wore on, and we spent the afternoon chatting with our fellow guests, catching up on news back home, and for me, writing. A guest who had dined with us the night before said he planned to brave the weather and take his chances to reach the airport in Queenstown, as he had a flight the next day into Auckland, and from there to Japan. His wife had left a few days prior to return to her job in Tokyo. We learned later that it took him five and a half hours to make the two-hour drive, as visibility was poor due to “a snow blizzard,” as he termed it.

In the afternoon, when about four inches of snow had accumulated, the honeymooners and Andy’s two children, who were home for spring break, made the best of the weather by building snowmen, while Maisie, the resident dog, had a blast racing around the property.

Snow continued to fall into the evening hours, and with no new guests arriving due to the inclement conditions, dinner was a quiet affair. The honeymooners ate early and retired to their room, hoping morning would bring clear skies and the opening of the Homer Tunnel and leaving us with the entire dining room to ourselves.