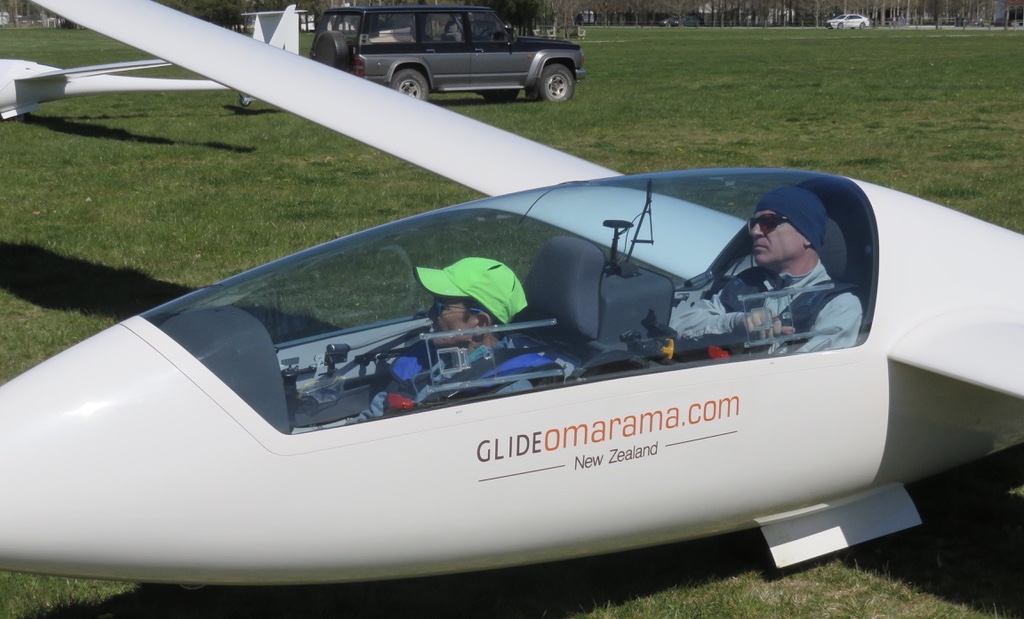 Martin, my pilot, and me, ready to take off at Omarama

The day dawned clear and crisp. Jo hugged me goodbye and said I would do fine. Not to worry. “These guys fly all the time and no mishaps.”

I won’t say I was looking forward to my first glider ride, but I will confess to wondering why I had agreed to do it in the first place. Perhaps to prove something to myself: that the cramped cockpit wouldn’t make me feel claustrophobic, that maybe in a glider I would overcome my fear of heights, or that the turbulence would be tolerable and I would learn a bumpy ride could be fun. Who knows? In essence it seemed I had to prove I could do it without freaking out. After all, you don’t fly solo. You have a qualified pilot to steer the glider, but there are only two people in it—you and the pilot. Does that make for better odds? I think not.

I was “handling” the entire idea until Martin, my pilot, said he wanted to go over the safety instructions. Okay. No problem. But when he mentioned how to put on my parachute, my mind froze. Parachute? Why would I need a parachute? A precaution! Still, I went along with the whole thing. “Okay, let’s go,” said Martin. What? Already!

As I followed him out to the glider, his last words from the safety briefing echoed in my ears. “If we need to, when I say jump, jump! Don’t hesitate.” He helped me into the cockpit, snapped on my seatbelt, and secured my parachute. My thought before the prop plane soared into the air, our glider attached to it by a single cable, was, “It’s going to be okay.”

Not long into the flight I heard a loud bang. I tensed, hesitant to ask Martin about it, but when I did, he said, “That’s the cable disconnect. We’re free.” Then I saw the prop plane fly away from us and back to the airfield at Omarama.

Gliding is a misnomer. You spend most of the time searching for clouds and riding their thermals in tight circles to keep the glider within the thermal to gain altitude before gliding to the next thermal. This is known as—you got it—“thermaling.”

I was trying to concentrate on the scenery and ignore how close we were flying to the mountain peaks when Martin said, “There’s your husband.” And sure enough, David and his pilot, Phil, went soaring by just below us, still attached to the prop plane.

The views soon commanded my attention and I turned to snapping photos. We soared over Lake Benmore and skirted the ridges of Mount Sutton. Being in the air was more fun than I had anticipated, and without the big fear factor I had expected.

Actually, the best part of the flight was when we landed—not because I was glad to be on the ground, but because I loved the long glide from the last thermal to the landing field. Despite all of my concerns, it was a wonderful experience and I have a piece of memorabilia to treasure—a certificate of achievement.

I had reserved a thirty-minute flight and David a sixty-minute one, and because I went up first, I was on the ground waiting for him when his glider landed. He introduced me to his pilot and I had to stifle a chuckle. His name was Phil Plane.

For dinner, we returned to Poppies, ready for another delicious meal. We ordered the fish of the day, grilled to perfection, and once again we had dessert back at Matuka Lodge, a slice of fruitcake and a glass of port to sip under a clear, star-studded sky.

All photos were shot with either an iPhone or a Canon SX700HS. Digital SLRs weren’t permitted in the cockpit, and please excuse the glass glare.