My Last Thoughts On Tomatoes 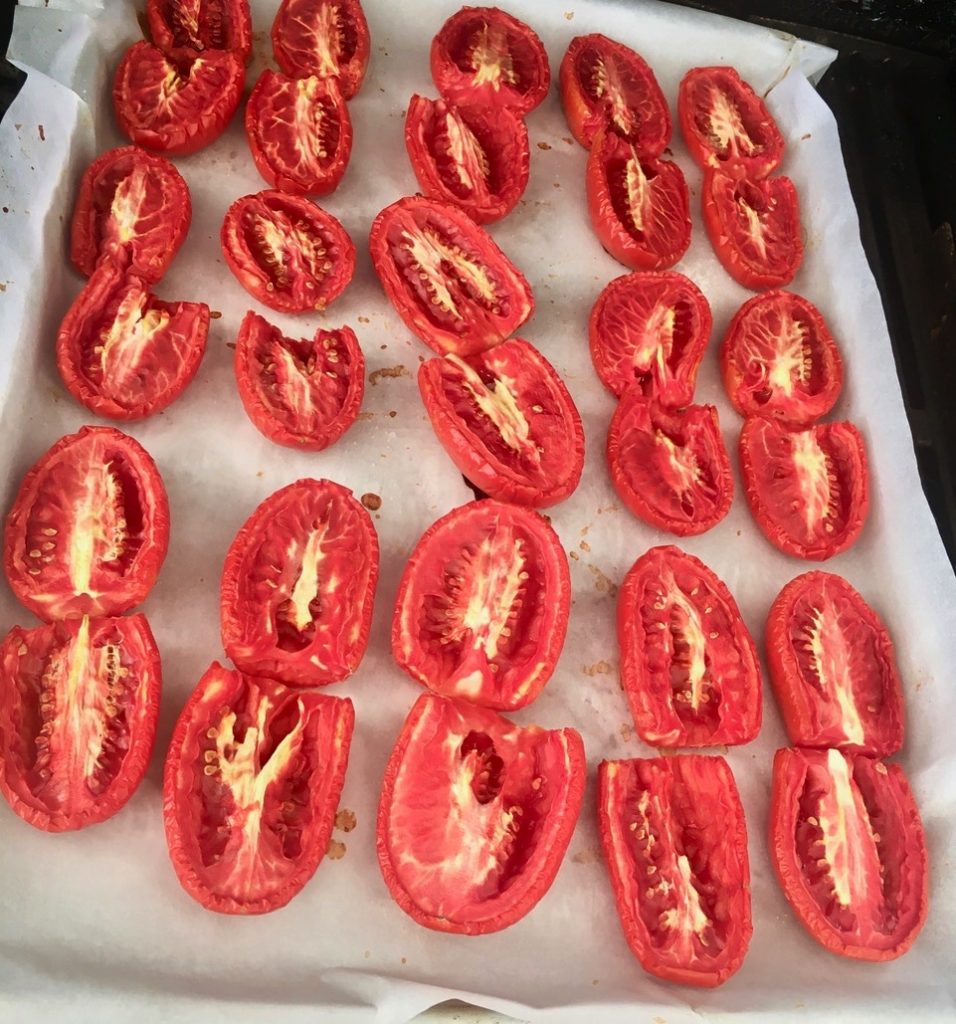 Red clouds scudded across an ice blue sky. The word “ice” appealed to me, especially when the temperature had already nudged 85 and the sun hadn’t even broken on the horizon. The thought alone had a cooling effect on what was to be another 100-degree day in Texas.

I wasn’t complaining about the heat, but days earlier my tomato plants were beginning to labor under the sun’s beating rays. Most had already given all they had to give and their abundant harvest was winding down. It had been a good tomato season, slow to start with an unusually cool and wetter spring than in years gone by, but the yields hadn’t disappointed. And my Romas have been some of the best I have ever grown—large, plump fruit, perfect for salsa and drying. Because this crop was so successful, I decided to experiment and keep some of the less desirable fruit for seed.

The idea to harvest my own tomato seeds came to me when I was about to toss out some “salad” tomatoes I had bought at Costco. They had sat in the refrigerator while we eagerly awaited for our own plants to set fruit and ripen. Always a long wait. I simply dug a hole, tossed the rotten “salad tomatoes” into it, and watered the area. Weeks later I had what I call “volunteers.” I transplanted eight of the most healthy looking specimens and am nurturing them from there.

I don’t normally grow smaller varieties of tomatoes, because I have a pet peeve about gardening. I love everything about planting a vegetable garden—everything—except picking small produce. One season of harvesting cherry tomatoes and I’ve never grown them again. It’s the tedium of picking that I detest.

With an abundance of Roma tomatoes from this year’s harvest, I decided to dry some to conserve freezer space. If you recall, I’ve sworn off canning as I’ve grown older, and our current “overflow” freezer is already full of spaghetti sauce made from last year’s harvest. Yes, I could make pesto, I have plenty of basil. Or pack the dried tomatoes in oil, but I elected to freeze them once they had been dried.

I also decided to try something new when it came to drying them. My dehydrator had long been donated, and the thought of sun-drying them was too labor intensive. It also conjured up a bad memory. As a teenager, I had visited a friend whose father dried his own fruit for his family’s consumption only. I was in awe of the racks upon racks of drying fruit in his huge barn, the ceiling equipped with row upon row of glass skylights. In awe until I saw two rats nibbling on a piece of fruit that had fallen from one of the racks. Knowing how agile these rodents can be I wondered if they could reach the racks of drying fruit. Enough said.

With a forecast of 100 degrees for the week, the prospect of heating up the house even one iota didn’t appeal to me, so I tried something new. I put the sliced tomatoes on the BBQ grill. Yes, you read that right. But I had a plan. I’d fire up the smoker system on our DCS.

Ignoring the instructions to fill the smoker tray with wood chips, as I had no intentions of wood smoking my tomatoes, I ignited the smoker burner and turned it to its lowest setting. I’d monitor the heat with a meat thermometer I keep inside the grill. My goal was to maintain the temperature at or below 170°F. For tomatoes dried in an oven, most recipes recommend slow-roasting them at a low heat of 250°F. Since I was in no hurry with them drying outdoors, I maintained a consistent temperature of 170 to 180 maximum.

In closing, I have a couple of tomato tips you might like to try. They’ve worked for me.

1. When growing tomatoes, clip off any new flowers until the plant is about a foot and a half tall. That way, the plant can support the weight of the fruit. Yes, I do use tomato cages, but this method gives the plants a sturdy start.

2. And, rather than grow a cluster of 5 or 6 smaller tomatoes, snip off two or three of the flowers. Less fruit, but the remaining tomatoes grow bigger, but not so much bigger that they are prone to splitting. You don’t want this.

Of course, these tips depend upon the variety of tomato you are growing.