Monday morning the sun appeared as we jumped on the A8 and motored toward the Nice airport. There, we would drop off the rental car and catch a ride to our hotel in Monte Carlo. As we exited the subterranean parking lot in Avignon, we misjudged the distance from the car to the wall of the underground garage. I winced as we made the tight, sharp angle, not surprised to hear the grind of metal against stone, and wondered how much repairs would cost. But a little over two hours later, when we turned in the car, the Avis representative seemed nonplussed as he looked at the damage. “That’s nothing. Happens a lot,” he said and told us to have a safe trip down to Monaco.

We met our driver outside the terminal, a personable man who chatted about the goings-on at the Cannes Film Festival. I was definitely more engaged in what he had to say than Dave, until our driver mentioned all the preparations under way in Monte Carlo for the upcoming Grand Prix. For the rest of the drive, the two were engaged in an intense discussion about the Formula One world and only paused when a Lamborghini or Ferrari whizzed by. I even had to interrupt them to point out the banana-yellow McLaren Spider closing in on us. Both immediately went silent as the sports car roared by. A few minutes later I said, “Bugatti Veyrons in tandem, bearing down on the right.” Funny how quickly a comment like this will grab a man’s attention. The silver-blue and black exotics flew past us. I was a bit blasé about the idea of hanging around the pits while the “pitmasters” (my personal term) set up for the Grand Prix, but I would soon be bitten by the racing bug.

I’m a James Bond fan, so ever since I saw GoldenEye, Monte Carlo has been on my must-see list; that’s longer than I care to admit. As we left the A8 and began our descent down the steep hillside into the city, I was astounded by the number of rooftops and high-rise buildings—a lot of very expensive real estate crammed into a tiny strip along the French Riviera. Beyond stretched the Mediterranean Sea, its turquoise waters at the shoreline blending into cobalt as the surface receded to the horizon, sparkling under the strong sunlight. For the first time in a long while, I donned sunglasses. 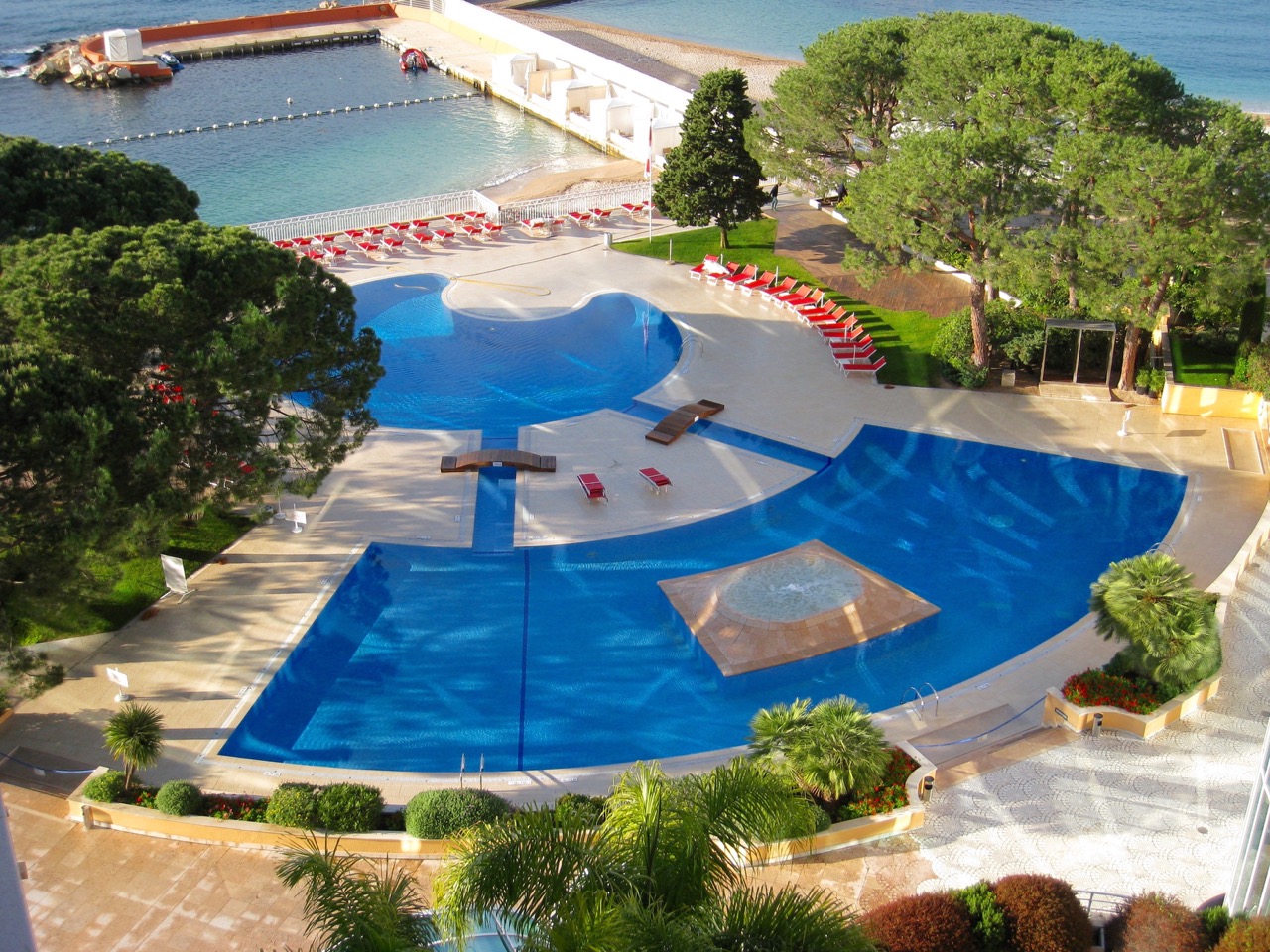 We checked into Le Méridien Beach Plaza, and with nothing on our agenda for the afternoon and no dinner reservations to honor, we unpacked, skipped lunch, and hit the beach for a long walk. After a week of sporadically chilly and rainy weather, it felt good to have the sun warm us and to dig our toes into the hot sand as we traipsed along the waterfront.

Less than five minutes after leaving the private beach near our hotel, we came to Larvotto Beach, which a local referred to as “one of the inherently glitzy stretches of sand in the world.” We slipped on our thongs, because the sand was actually pebbles, and paused to snap a few shots. The same local advised us to turn our backs to “the backdrop of luxury apartments stacked like decks of cards on the promenade” and “drink in the magnificent Mediterranean.” Not a bad suggestion at all. 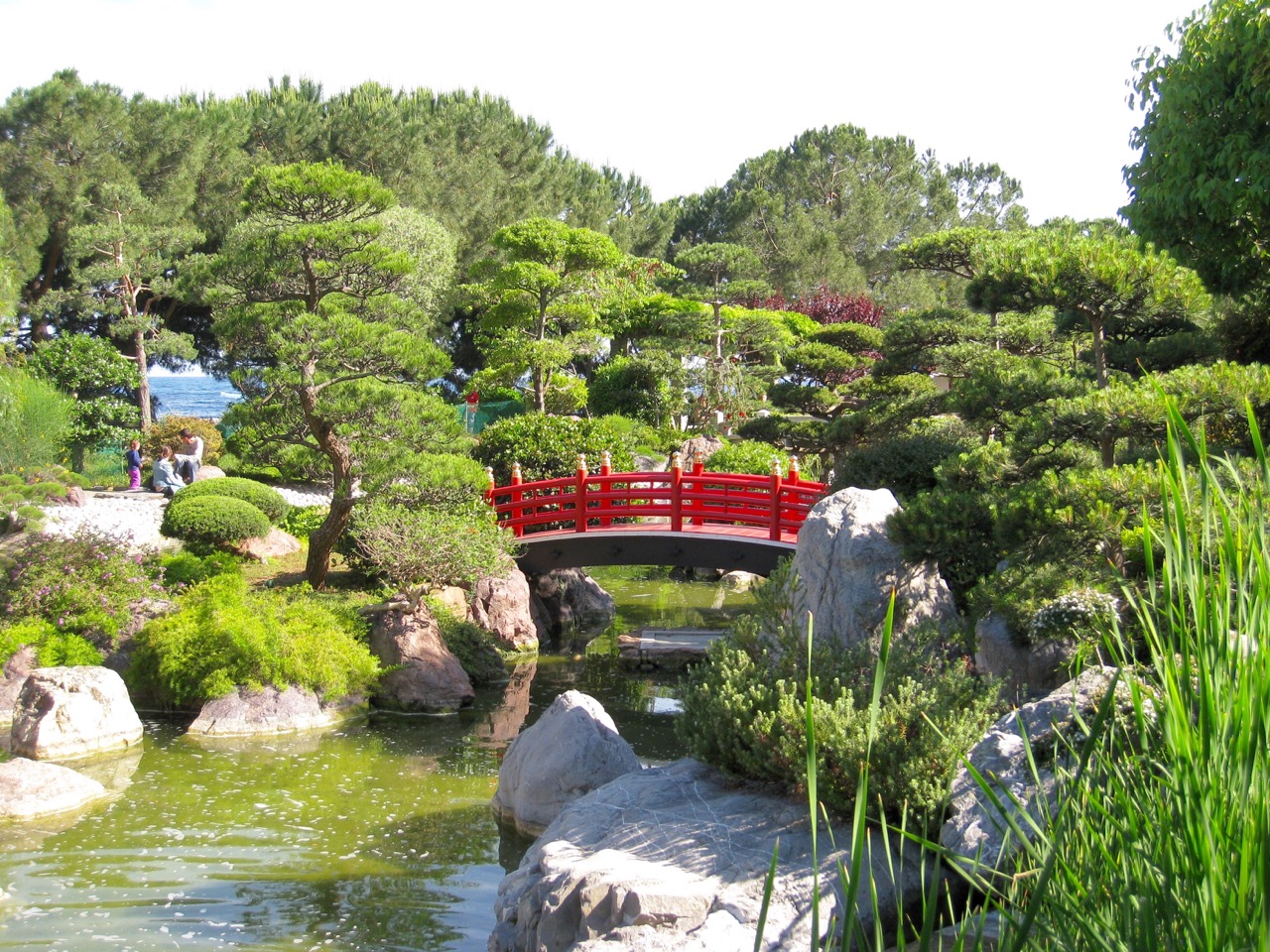 We left the beach and returned to the promenade, continuing on until we discovered Jardin Japonais de Monaco (Japanese Garden), a tranquil and delightful garden along the beachfront. As we neared the Larvotto Tunnel, we decided to retrace our route to the hotel for an early dinner, as we were now famished after forgoing lunch. We sat on the terrace and relaxed with a glass of wine while staring at the placid Mediterranean, the sea fired a soft red as the sun began to set. The day cooled, so we went in for dinner. We ate lighter than we had over the past week, bypassing starters and desserts. Predictably, I ordered the risotto with black truffle and chicken oysters. Dave had grilled fish, drizzled with garlic butter, and baby potatoes. We retired early, for the next day we had planned a full day of sightseeing. 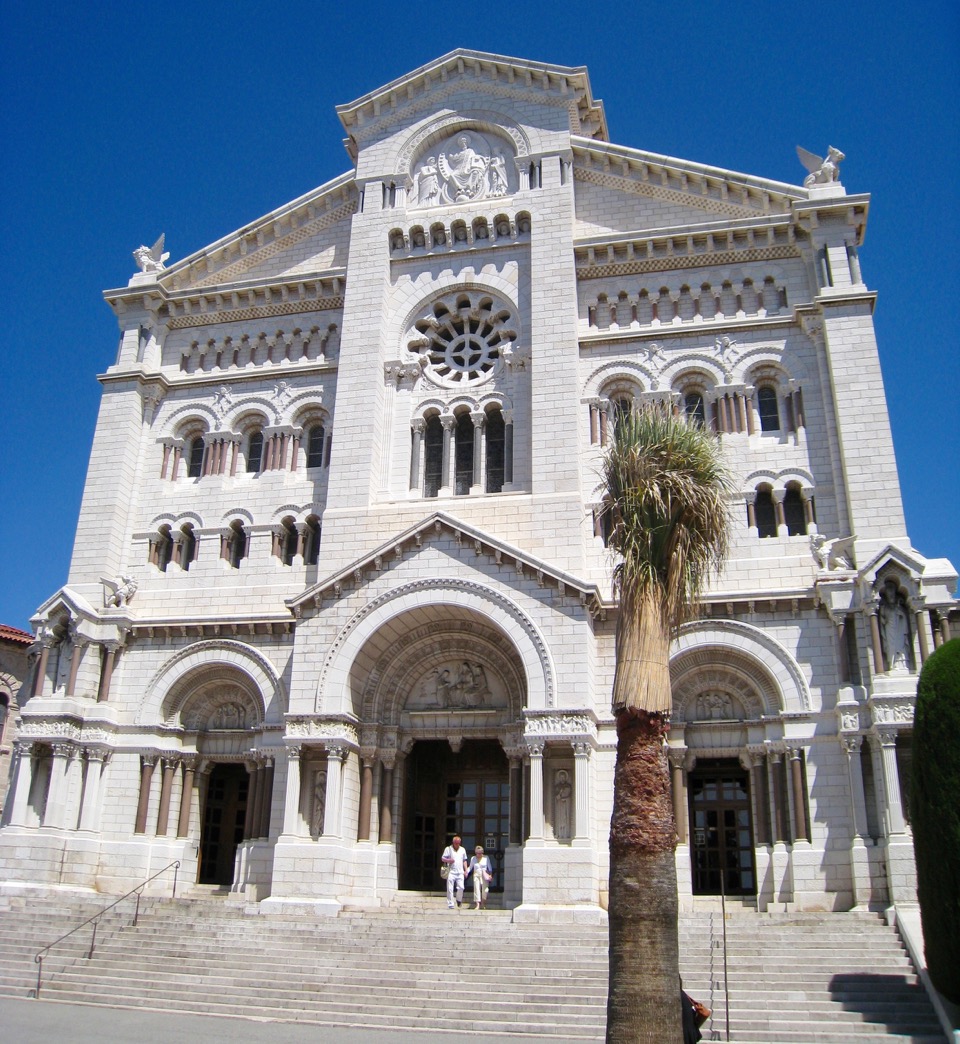 Over a late breakfast, Dave and I made a list of sights we wanted to see, then headed out. We tackled the walk up the hill to the Prince’s Palace first. The royal residence was built in 1191 as a Genoese fortress and has been home to the Grimaldi family since they captured it in 1297. The palace, as most know, was also home to American film star Grace Kelly after she married HSH Prince Rainer III. We passed on touring the prince’s apartments and continued south to Saint Nicholas Cathedral. Here Grace Kelly was married, and here she is entombed. The neo-Romanesque-style church was built in 1875 with stark white stones from La Turbie, France. The long line of tourists waiting to see inside the cathedral deterred us from going in, so we proceeded to our next destination, Fort Antoine. This fortress built in the eighteenth century is now an open-air amphitheater. It was destroyed in 1944 and rebuilt by Prince Rainer III in 1953. The architecture can best be described as military with a watchtower and a pyramid of cannonballs at its center. Since it was quiet and undisturbed by tourists at that moment, we took a short break on the stone steps to gaze at the sea, sparkling under the noonday sunlight. Last on our list for the day was Port de Cap d’Ail, a peaceful marina protected by two jetties, the water deep enough to accommodate large yachts.  We browsed the shops, chatted with some of the crew bustling back and forth to their yachts, then headed for our hotel to get ready for dinner at Joël Robuchon.

We made our way up the candlelit walkway to the covered entrance of the Hôtel Metropole. Luxury sports cars lined the driveway. The restaurant’s interior was plushly upholstered and draped in tapestries, and reminded me of a palace parlor—but elegant, not gaudy. There were a selection of prix fixe menus, all of them pricey, but we knew they would be when we’d booked our reservations. Famished, since our last meal was at 9:00 a.m., we both chose the ten-course “Discovery” menu. We ordered wine and almost immediately a bread trolley was wheeled toward us, the assortment a bread-lover’s dream. If left up to Dave, he would have started and ended his meal right there and then. Our server lifted the lid on a bell jar. Stored beneath was the butter. She made perfect quenelles and placed them on our bread plates. Classy.

Our meal started with an amuse-bouche of foie gras mousse, salted caramel, and parmesan: a perfect combination of sweet and salty mixed with the rich, silky texture of the foie gras. Next a small round dish was placed before us. The top layer was black caviar, the layer beneath it jellied shellfish, and beneath that, crabmeat; the flavor of each played well off the others. Following this was asparagus with morels and shavings of parmesan—a good starter, but not outstanding. However, the duck foie gras in a savory crust with minted peas and mountain herbs made up for the rather bland asparagus offering. After this we were served a solitary langoustine wrapped in a basil leaf, rolled in pastry, deep-fried, and accompanied by a parsley dipping sauce. I’m not partial to fried food, but this tempura-style dish was light and not at all greasy. A warm salad of artichokes, squid, and smoky Spanish chorizo followed the tempura. Finally, the main course—grilled lamb with a bowl of Robuchon’s infamous pommes purée, rumored to be equal parts butter to potatoes. When Dave said the potatoes were the best he had ever eaten (and I agree), our server brought him a second bowl. The lamb was cooked to perfection. Full to the point of almost bursting—at least I was—I hoped I had room for dessert, a chocolate soufflé with fresh raspberries in a yuzu sauce. Nine and ten to end the ten-course offering were petit fours and chocolates, which we took with us. Hoping to burn off a few calories, we window-shopped for an hour in the multilevel Metropole Shopping Center located below the hotel before retiring for the night.