In EUROPE 2011: The Churches of Prague, we were searching for Dancing House, which sits on Ressolva Street across from the Jiráskűv Bridge. Dancing House was designed by Croatian-born Czech architect Vlado Milunić in collaboration with Canadian architect Frank Gehry. 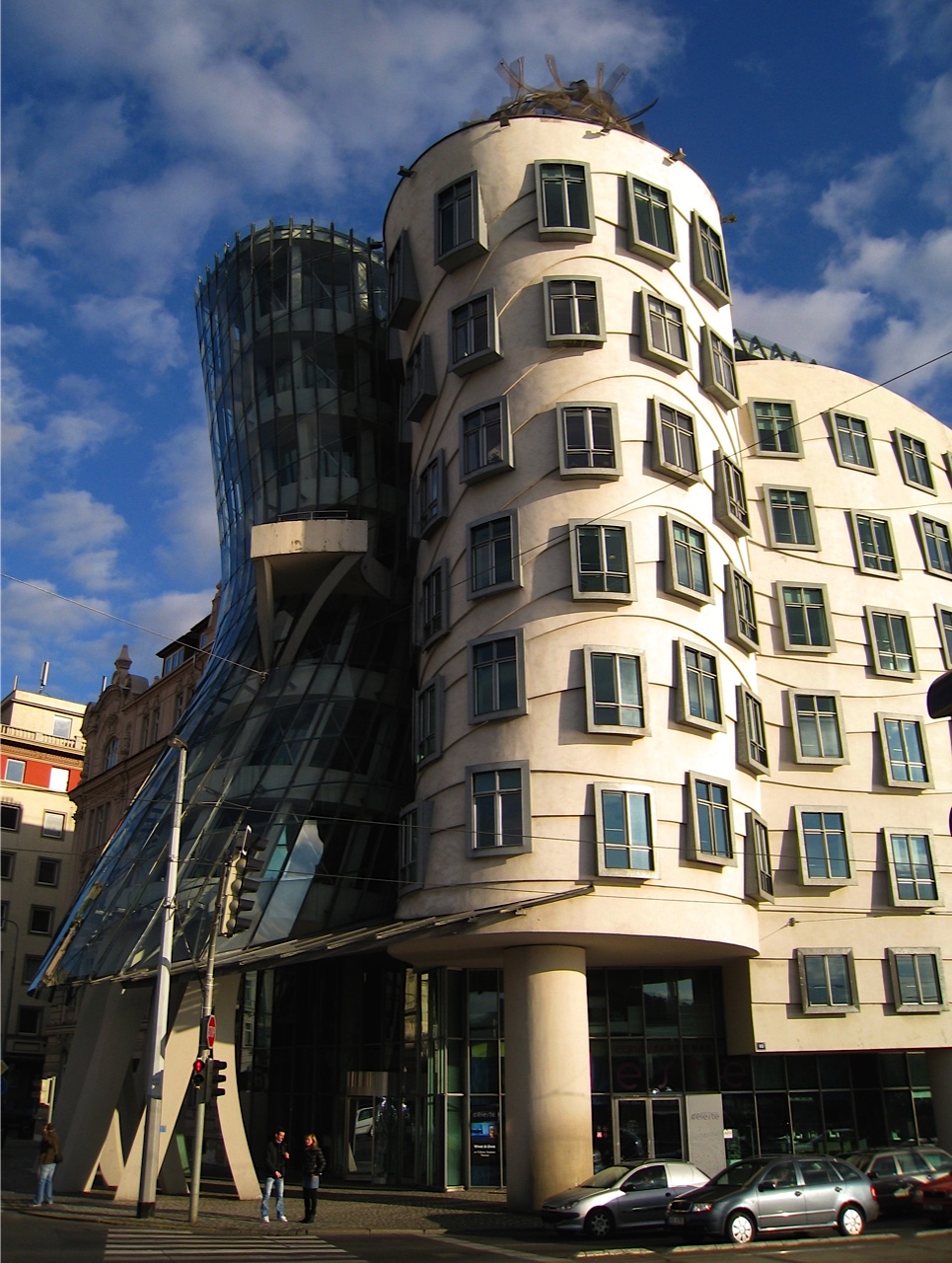 The modern building is a striking contrast to the historic sites in Prague. The wasp-waisted glass and steel tower appears to sway just as a couple would while dancing to music. The building is also called the Ginger and Fred house, referring to the legendary dance duo. Dancing House was home to offices, a French restaurant, La Perle de Prague on the top floor, and a café at street level. Since our visit, the restaurant has changed ownership. 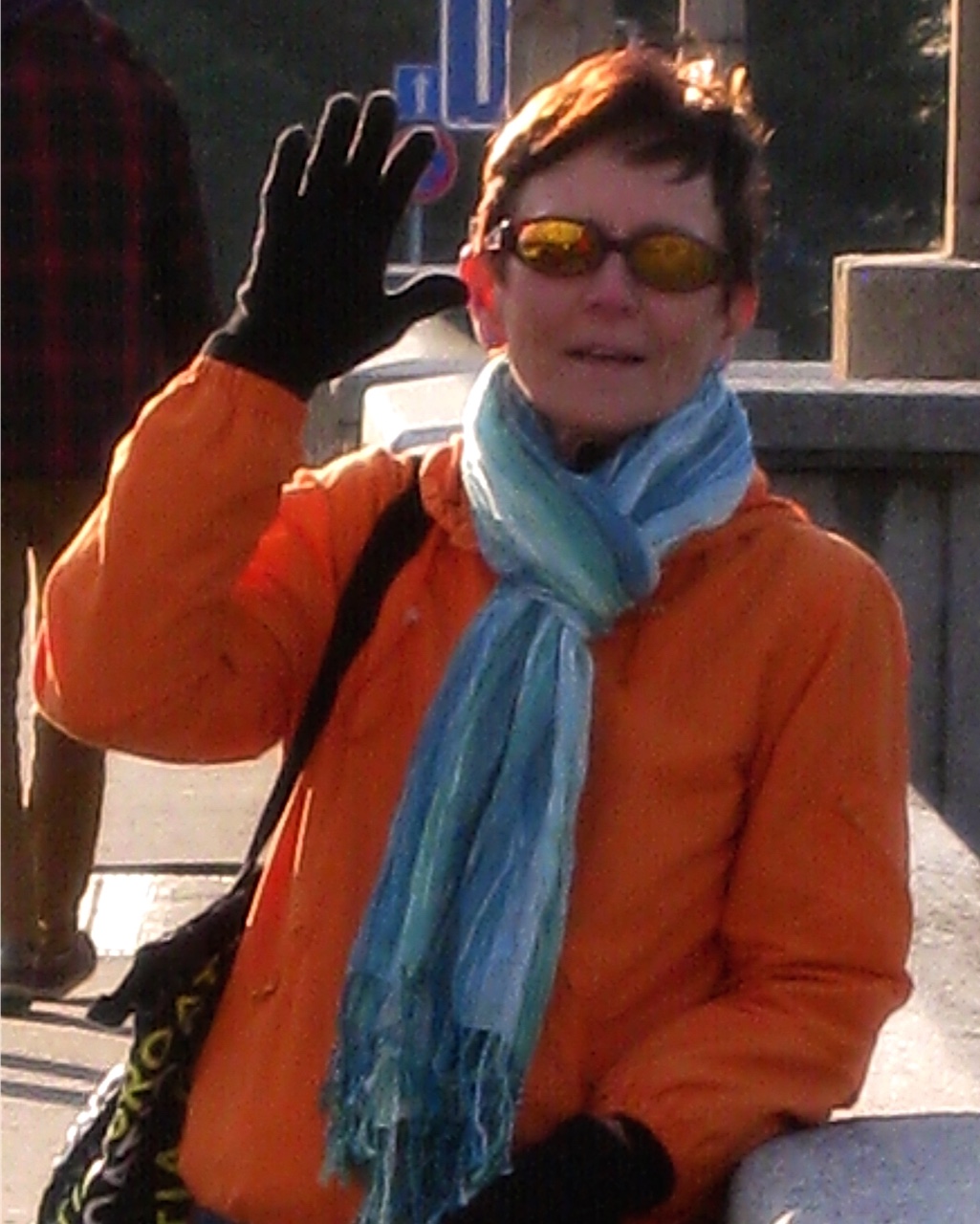 We crossed the Jiráskűv Bridge and paused for a photo op. This time I was the subject in my clashing outfit of an orange Windbreaker and blue-green scarf, but warmth meant more to me on this chilly day than making a fashion statement.

From the bridge, we followed the riverbanks to Kampa Island, home to the Kampa Museum, a modern art gallery. The unique collection of Czech and Eastern art is housed in Sova’s Mills. 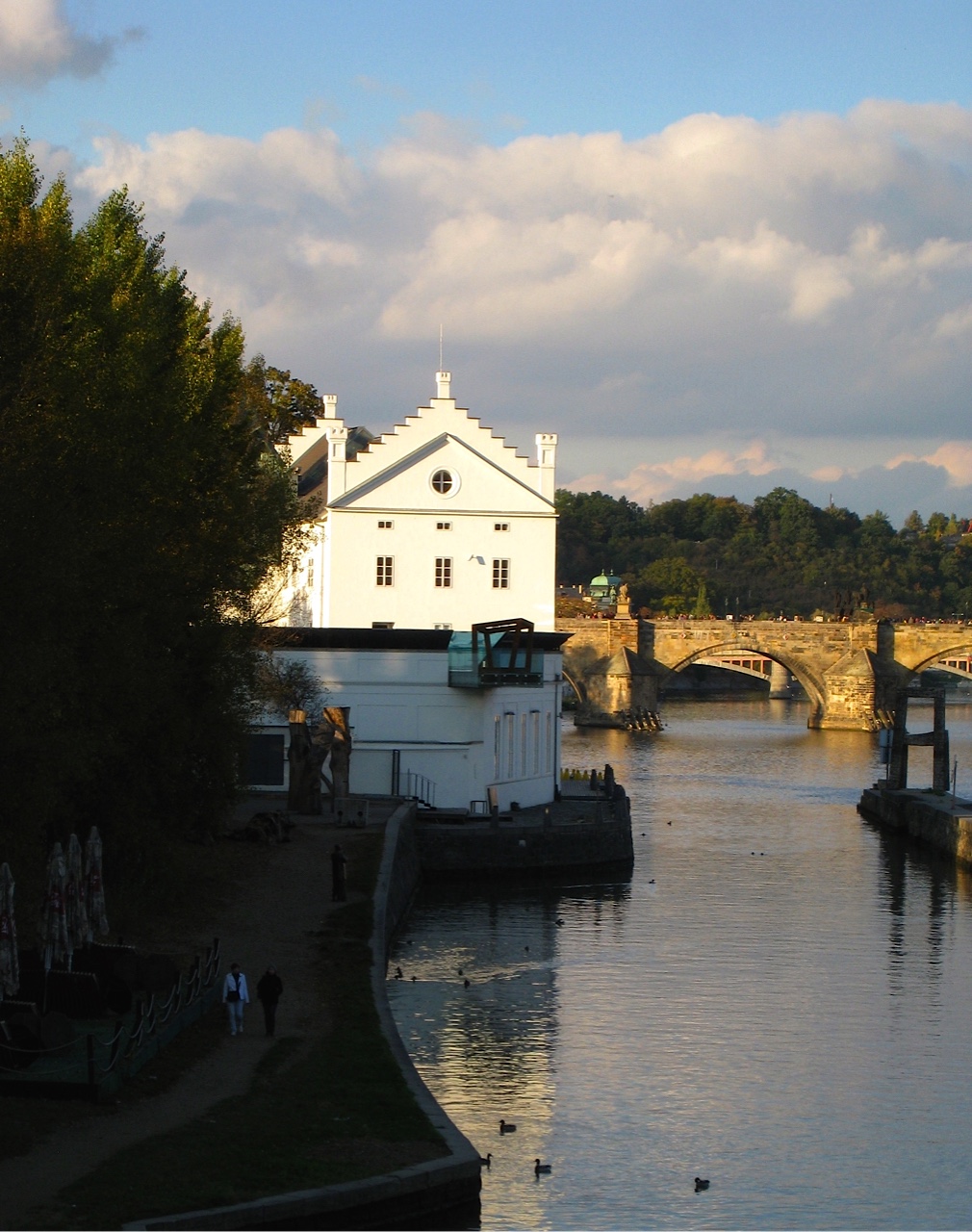 At one time there were many mills on Kampa Island and of various kinds: water, flour, and lumber, to name a few. And throughout the years they suffered damage from fires, floods, and wars. The construction of the current gallery was finished in 2003 and was designed by architect Helena Bukovanská. The exterior of the building caught my eye, the stark whiteness in direct contrast to the surrounding gardens of soft, lush greens and the blues of the river. The interior of the museum showcases several artistic objects made from an element that has always fascinated me—glass. The museum is enriched with a glass footbridge by Vaclav Cigler, which extends across the terrace and ends in a glass overhang over the Vltava River. Another glass object of interest is the cube by the artist Marian Karel that finishes off the stairwell. 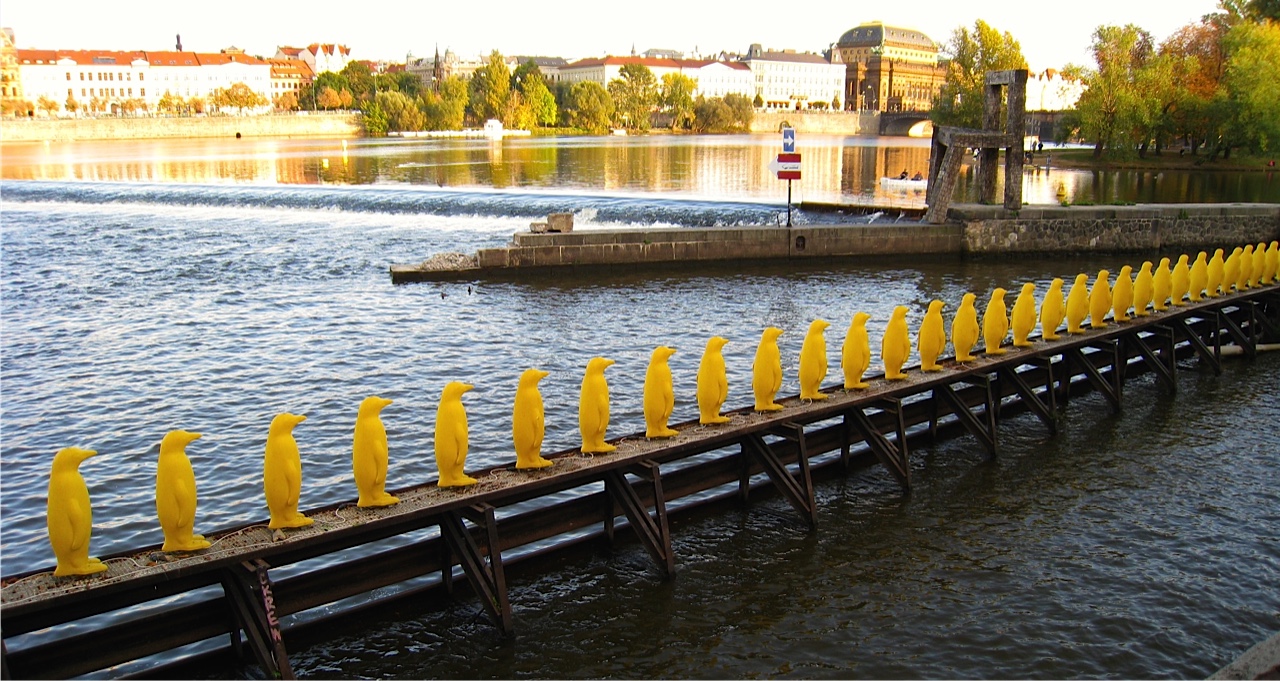 Equally compelling was the long line of thirty-four yellow plastic penguins standing on the river wall. The penguins were installed in 2008 by the Cracking Art Group, a group of six international artists. At night the penguins light up, casting a curious yellow glow on the surface of the Vltava River. They were made from recycled water bottles rescued from landfill sites. The motto of the Cracking Art Group is to “change art history through a strong social and environmental commitment, and the innovative use of different recycled plastic materials.” 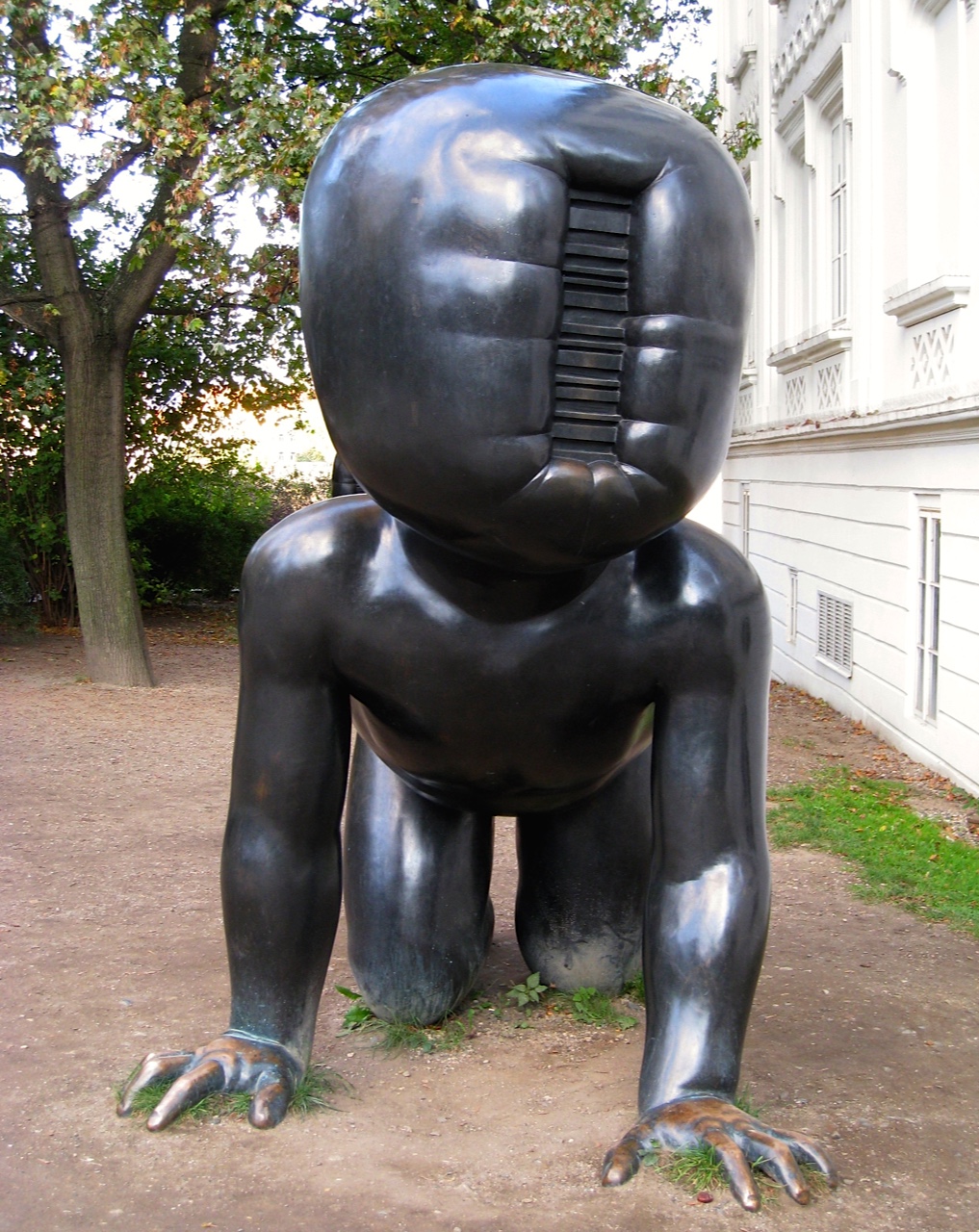 From the penguins we moved to the babies—to be exact, three giant, bronze, crawling babies with slot-machine faces by the country’s most famous and often controversial sculptor, David Černý. These giant babies guard the entrance to Museum Kampa. For more babies, take a fifteen-minute walk from the museum to Žižkov Television Tower in the Mahler Gardens. Here you will see ten enormous space-age fiberglass infants crawling up and down the television tower. At night, the babies glow neon red and blue. While some are offended by Černý’s work, I found it to be creative, and definitely original.

Mindful of the time, we proceeded to the Charles Bridge for our second walk over it that day, but on the first our intent was strictly to get from one location to the other. This time, we lingered to enjoy the massive stone structure, which is supported by sixteen arches and decorated with twenty-eight statues. The bridge always teems with crowds, activity, and vendors selling artwork. We chose a spot near a wall’s edge, people-watched, and listened to the musicians play, happy to stand for a while and not be walking.

Revitalized, we set out for our last destination of the day, the Church of Our Lady Victorious (Infant Jesus of Prague) for services. The church was the first baroque church in Prague, built in 1613 for the German Lutherans. After the Battle of White Mountain, the church was given to the Carmelites as a sign of gratitude for their victory. In 1628 a wax effigy of the infant Jesus was donated to the church. The infant is said to have miraculous curative powers, and apparently protected the city against the plague and destruction from the Thirty Years’ War. 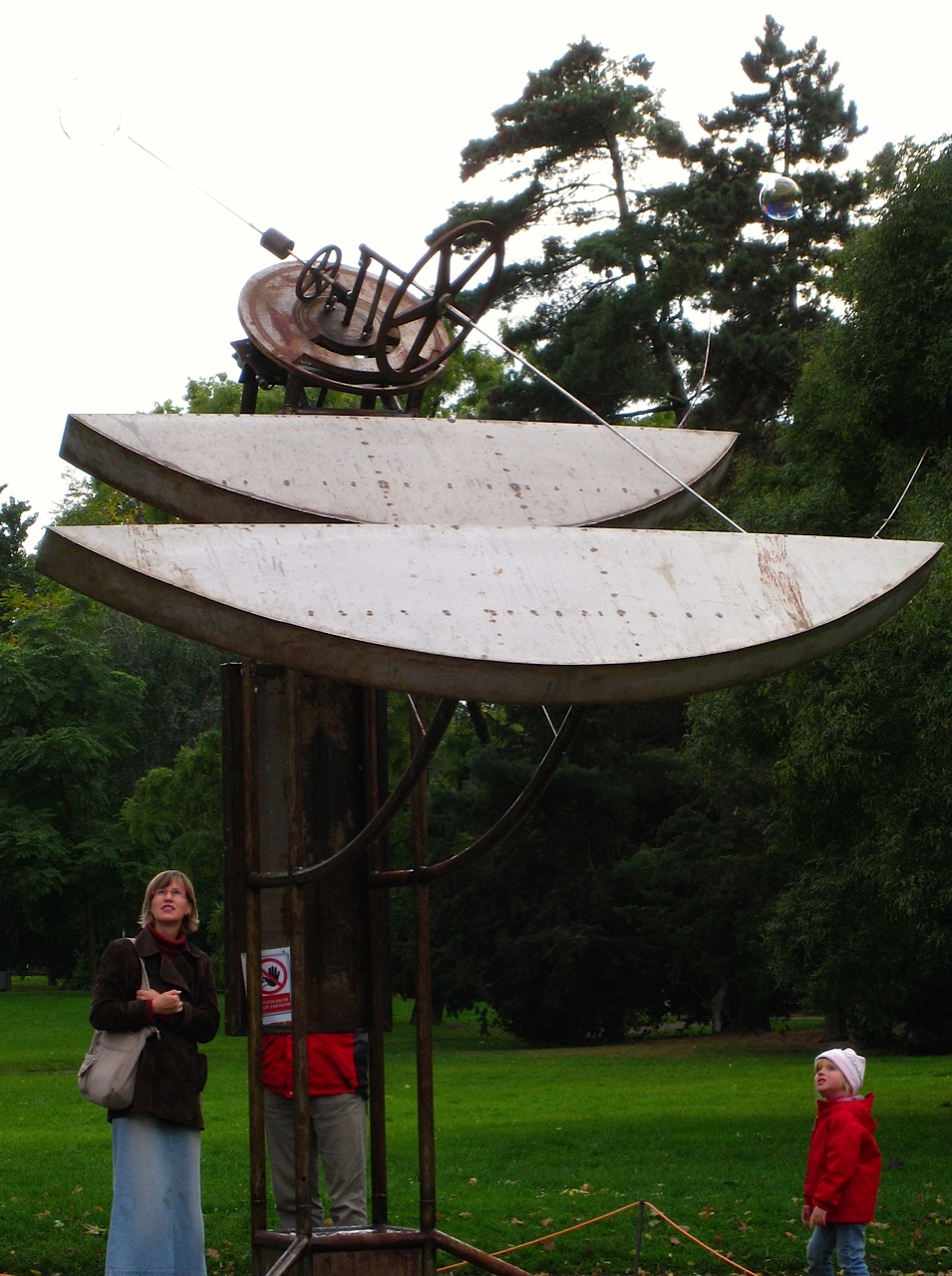 The war, which was waged from 1618–1648, was actually a series of wars fought by various European nations for various reasons, including religious, dynastic, territorial, and commercial rivalries. Its destructive campaigns and battles occurred over most of Europe, and when it ended with the Treaty of Westphalia in 1648, the map of Europe had been irrevocably changed.

Dusk began to settle over Prague as we gravitated toward our hotel with a final stop on our agenda. Still full from lunch, we passed on dinner in favor of dessert. Associated with our hotel was a petite café, Barocco Veneziano Café, near the entrance. By now, it was too cold to savor our sweets in the adjoining courtyard, so we found a table in the corner of the café and ordered hot chocolate and an assortment of homemade chocolates and truffles.

While we savored our sweets, we uploaded the photos we had taken during the past two days from our cameras to our iPads. In doing so, we came across pictures snapped at the Charles Square in New Town. One in particular amused us, a giant bubble-blowing machine. See the photo inset.