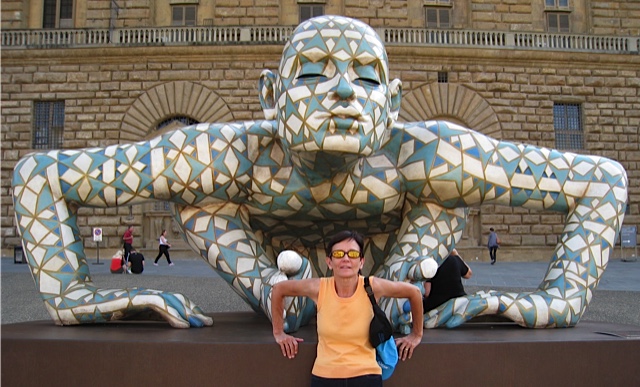 We rose early and caught the vaporetto to the rail station, where we boarded the train for Florence. The two-hour ride went fast. We had window seats to enjoy the passing view, but soon became absorbed in conversation with our seat companions. Laure was Italian and her husband Paolo, Argentinian. They were in Italy visiting her family. Before we left the train, we exchanged contact information and promised to look them up whenever we were in Buenos Aires, which was on our list of must-see destinations.

In Florence, we could have walked from the Santa Maria Novella train station to the hotel, a ten-minute trip, but opted for a five-minute cab ride, not realizing our hotel was so close by. My recommendation is if you don’t have heavy bags to carry or wheel, then walk, which is what we did the next day to catch a bus (at the rail station) for our tour of Tuscany. 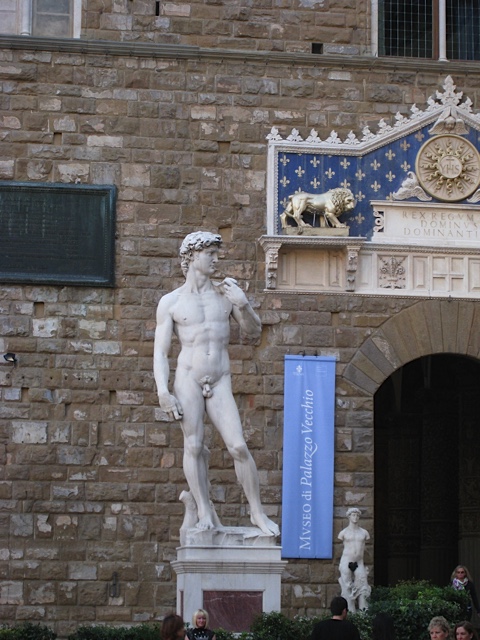 We checked into the Hotel dei Macchiaioli, located in the heart of the historic district, and settled in for our stay. Our room, one of only fifteen, was quiet and nicely appointed, and the hotel staff pleasant and accommodating.

After we unpacked, we walked to the Galleria dell’Accademia for our 4:00 p.m. reservation. There was some confusion as to where we should pick up our tickets. While Dave sorted out the problem, I was dismayed to see the long lines continue to grow. Once we resolved the issue, the man taking the tickets informed us that the 4:00 p.m. group was already inside, so he let us jump the line.

I couldn’t wait to see Michelangelo’s magnificent sculpture David, a Renaissance masterpiece created between 1501 and 1504. The white marble nude, which stands seventeen feet tall, represents the biblical hero David. Armed with only a slingshot, David defeats the giant. The sculpture was moved to the Accademia in 1873 to protect it from damage and later replaced with a replica at the original location, the entrance to Palazzo Vecchio. 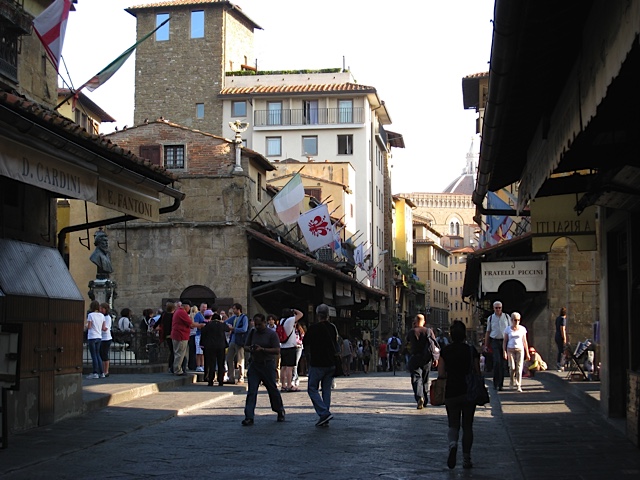 Our first, full day in Florence would be a long one, so we laced up our best walking shoes, grabbed our water bottles, and set out on foot to the Uffizi Gallery to see the many pieces of artwork collected by or commissioned by the House of Medici. The Uffizi has the largest collection of Italian paintings anywhere, and they are displayed on a single U-shaped floor in chronological order from the thirteenth to the seventeenth centuries. Leaving after our two-hour tour of the gallery, we bumped into Laure and Paolo—a delightful surprise. We talked for a few minutes, then said goodbye and headed to our next destination—the Pitti Palace. 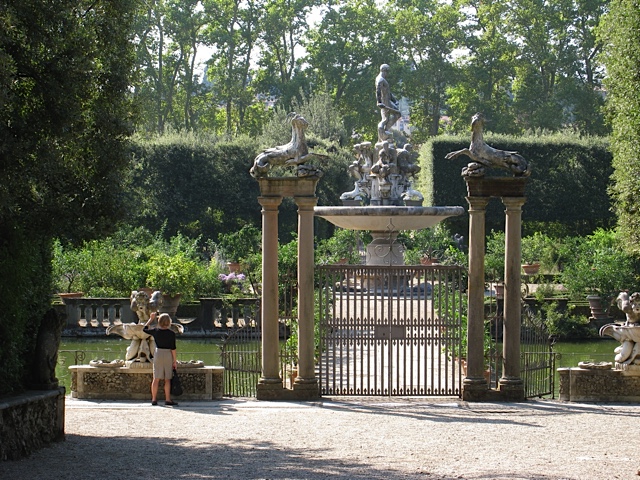 The imposing building was the former residence of the grand-dukes of Tuscany and later of the king of Italy. It now houses several important collections of paintings and sculptures, porcelain, and a costume gallery. But as an avid gardener, I was more interested in seeing the magnificent Boboli Gardens, one of the earliest Italian gardens, famous also for its fountains and grottoes. It was impressive, and indeed a living work of art, so we spent hours roaming the lush landscapes and snapping more than our share of photos. We could have stayed longer, but next on our list was the Duomo, the Gothic cathedral named in honor of Santa Maria del Fiore. 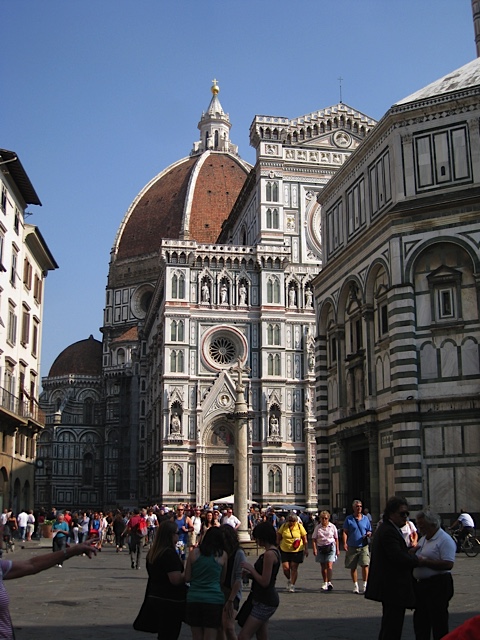 My eyes traveled from the red-tiled dome of the Duomo to the facade of the Gothic Revival cathedral, the exterior faced with polychrome marble panels in various shades of green and pink bordered by white. The interior was stark, somewhat plain, and vast. As a minimalist, the austere space appealed to me. I wanted to linger there as well, but with time a constraint, we left for our last destination of the day—a walk over the Ponte Vecchio. 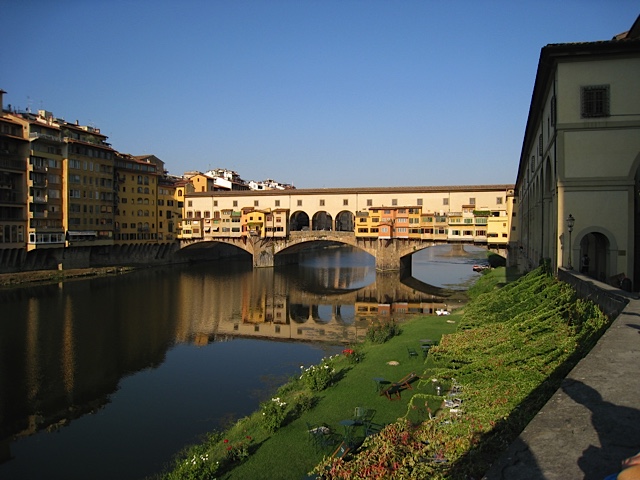 The Ponte Vecchio is a medieval arched bridge over the Arno River with shops built along both sides. At one time the stores were occupied by butchers, but in 1593 they were replaced with more prestigious occupants—gold merchants. Today, there are gold and silver jewelry boutiques, art galleries, and souvenir shops for your browsing or buying pleasure. We strolled from one end of the bridge to the other, then returned to our hotel to change for dinner. We had reservations at Ora D’aria Ristorante.

The phrase ora d’aria refers to the period when prison inmates are let out into the yard: a blessed reprieve. One of the restaurant’s dining rooms is deep inside, far from the street, and the other underground. We were seated in the former. The menu paid homage to Tuscany, and after perusing the dinner items I couldn’t wait to order. 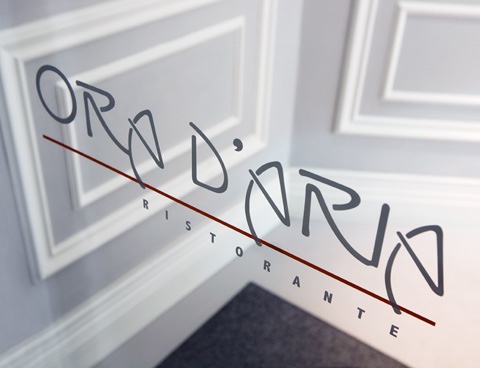 The prix fixe offering started with the “end of season meat”—rabbit with mustard—followed by homemade tagliolini. The main was grilled beef with a potato bacon tart. For dessert, we chose a chocolate and white chocolate soufflé and a crème caramel with melon. After this delicious meal, we took a leisurely stroll back to our hotel to rest up for tomorrow’s tour of Tuscany.