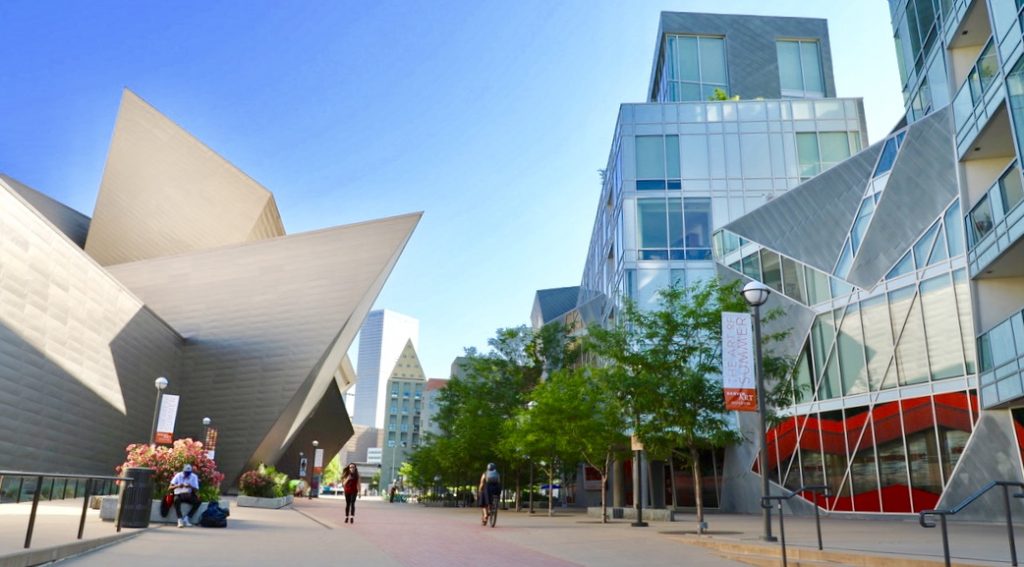 Our city walk began with a visit to the Frederic C. Hamilton Building of the Denver Art Museum (DAM). To accommodate the DAM’s growing collections, the museum commissioned architect Daniel Libeskind to design the 146,000-square-foot expansion that would be named after legendary philanthropist Frederic C. Hamilton. The building was completed in 2006.

Libeskind’s Hamilton Building mimics the peaks of the Rocky Mountains—Denver’s backdrop. Says Libeskind, ”I was inspired by the light and the geology of the Rockies, but most of all by the wide-open faces of the people of Denver.” The building is covered in nine thousand titanium panels that reflect the Colorado sunshine. A favorite architect of mine, Libeskind also designed the Royal Ontario Museum in Toronto, Canada, and I was fortunate enough to photograph it during a visit to the city. Canada 2017: Toronto—Day 3

Outside the DAM, I was pleased to see the giant version of Big Sweep, a thirty-five-foot-tall broom-and-dustpan metal sculpture that delivers a timeless message: clean up your mess. A smaller version is in the portico gallery at the ART hotel. Visit my previous post to read more: Colorado 2018: the ART, a hotel

Equally impressive were the giant bronze statues of a Scottish Angus cow and her calf by Dan Ostermiller. They sit outside of the Denver Civic Cultural Center.

After our visit to the DMA, we walked around Denver, concentrating on snapping photos of art and architecture. That night, we dined at trendy El Five, with beautiful views of downtown Denver.