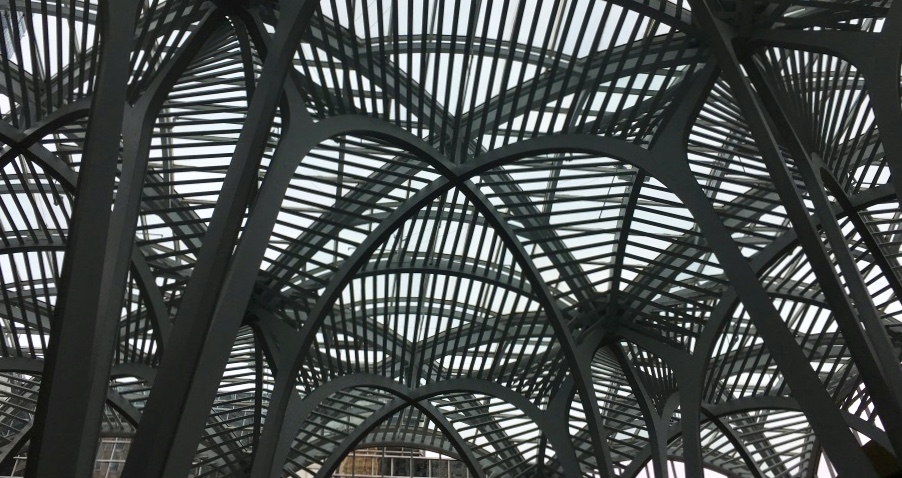 I set most of Saturday aside for sightseeing. First on my must-see list was Brookfield Place, formerly known as BCE Place, is a massive business complex that sits on five and a half acres of prime real estate in downtown Toronto. It has two towers—the Bay Wellington Tower and the TD Canada Trust Tower, and also includes twelve older properties that survived the Great Fire of 1904, which destroyed much of downtown Toronto. http://www.archives.gov.on.ca/en/explore/online/fire/index.aspx

And while the history of the 2.6 million-square-foot office and retail complex is interesting, I was there to photograph the Allen Lambert Galleria, nicknamed the “crystal cathedral of commerce,” an atrium designed by Spanish architect Santiago Calatrava. The six-story-high pedestrian thoroughfare is constructed of eight freestanding supports on each side of the galleria, which branch out into parabolic shapes like a forest canopy or a tree-lined avenue. The galleria was the result of an international competition to meet the City of Toronto’s public art requirements, and the winner was Calatrava. https://patkrapf.com//2015/09/17/europe-2013-the-guggenheim-bilbao-spain/

Next was the Art Gallery of Ontario (AGO). When it comes to architecture, I’ve always been intrigued by the story behind the building, especially how the old transforms itself into the new.

The story of the AGO begins in the early nineteenth century. In 1817, D’Arcy Boulton Jr. built The Grange for his wife Sarah Anne and his eight children. The home was located on a hundred acres and was bound by Queen and Bloor and Beverly and McCaul streets. The eldest Boulton son, William, inherited the home. He married a wealthy Bostonian named Harriet Dixon. After William’s death, Harriet married political writer and Cornell University professor Goldwin Smith.

In 1900, a local artist, George Reid, was president of the Ontario Society of Artists and his dream was to create an art gallery. A campaign was established to raise money for the project, and in 1902 the childless Smiths willed The Grange as the first location for the Art Museum of Toronto.

In 2002, the AGO launched an ambitious expansion project to the tune of $276 million called Transformation AGO, and acclaimed Toronto-born architect Frank Gehry was commissioned for the project. Gehry’s transformation increased the gallery’s size by almost 50 percent.

Coincidentally, as a child Gehry had lived in the same neighborhood as the art gallery and had visited on many occasions. Read more about Gehry’s childhood here: https://www.thestar.com/news/insight/2015/09/28/frank-gehrys-first-playground-of-the-imagination.html

While taking photos of the AGO, I was struck again by the relationship between the old and the new. The Grange and the AGO fused in time as one interwoven structure. And across the street from Gehry’s “glass boat”—the glass curves reminded me of an overturned canoe—stood old Victorian row houses.

At the Royal Ontario Museum (ROM), I was drawn again by the juxtaposition of the old and the new. Captivated by the sharp, colorful angles of the Michael Lee-Chin Crystal, a silver-clad crystalline shape that emerges out of the original WWI-era building, I couldn’t wait to see Daniel Libeskind’s flamboyant glass and aluminum-clad addition. When I mentioned visiting the ROM, my Toronto-based editor Caroline said, “People either love it or hate it.” I loved it.

One last comment on the old and the new. At the intersection of Bloor and Avenue Road, within eyeshot of the ROM, stands the Church of the Redeemer. The Anglican church is a Gothic Revival-style stone building built in 1871 on land that was then on the fringe of the city. Because of failing attendance, the church ran into financial difficulties and was taken over by the Anglican Diocese of Toronto. The church lands were sold and the Four Seasons Renaissance Centre was built on them. With the proceeds from the land sales, the church was again solvent, and services are held on Sundays and during the week.

It was then time for dinner. I had never eaten at a Momofuku restaurant and was, at first, confused by all the different names attached to David Chang’s Momofuku. In Toronto, the three-story building at 190 University Avenue is home to Noodle Bar, Nikai, Milk Bar, Daishō, and Shōtō. We had reservations at Momofuku Daishō on the third floor. The entire building was rocking—happy chatter and delicious smells. The menus change frequently based on market availability.

Curious and want to read more about Momofuku? https://www.theglobeandmail.com/life/food-and-wine/restaurant-reviews/momofuku-daisho-why-its-one-of-the-most-ambitious-and-exciting-places-to-eat-in-toronto/article5610940/