Arroyo
An arroyo, Spanish for “brook,” is a steep-sided, dry creek bed that seasonally fills and flows after a sufficient rainfall. Flash floods are common in arroyos following heavy thunderstorms. The term arroyo is mainly used in the southwestern United States.

Photo taken in Taos, New Mexico, the primary setting for Brainwash. This is the arroyo where Bullet found the USB drive, and is the same arroyo where Johnny was abducted in Brainwash. The word arroyo will also appear in future Darcy McClain and Bullet thrillers. 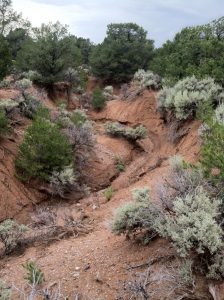 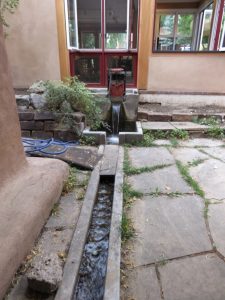 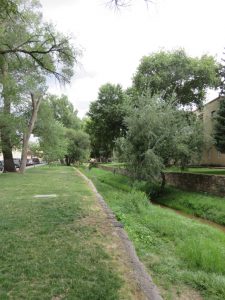 Alluvial Fans
Large fan-shaped deposits of water-transported sediment (clay, silt, gravel, or similar detrital material) that form at the base of a topographic feature such as a mountain. The term is found in Brainwash. The best representation of alluvial fans, one that leaves no doubt about what you are looking for in the term, was taken at Lake Louise, Banff, Alberta. A future Darcy McClain and Bullet thriller will be set in Alaska and Canada. 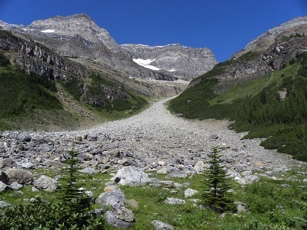 Bladed
I first heard the phrase “bladed easement” from an attorney who was in negotiations with neighbors for an ingress and egress to a landlocked property in Taos. While I couldn’t find the exact phrase “bladed easement” in Black’s Law Dictionary, I did find: blading an easement, blading or scarification of a surface (in regards to clearing land), and surface blading of an easement. Bottom line, I stand by my use of the phrase “bladed easement” in Brainwash. Side note: in property law, an ingress, egress, and regress are the rights of a person to enter, leave, and return to a property. The term will also appear in Clonx when Darcy goes to court in New Mexico regarding her landlocked acreage. 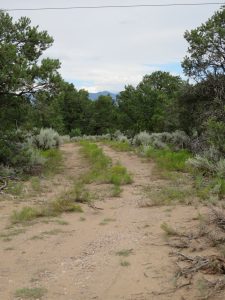 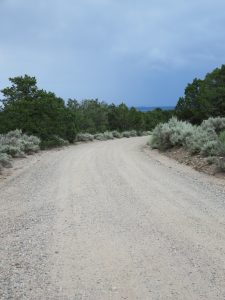 Chasm
A deep, steep-sided opening in the earth’s surface; an abyss or gorge as in the Rio Grande Gorge. The term is first seen in Brainwash and may reoccur in future Darcy McClain thrillers.

Escarpment
A long cliff or steep slope separating two comparatively level or more gently sloping surfaces and resulting from erosion or faulting. The term is used in Brainwash. Photo: Escarpment in the Río Chama Valley near Abiquiú, New Mexico.