Spanish Pueblo Style
The characteristics include earth-colored stucco walls; adobe (or facsimile) bricks; rounded corners at intersections; brick flooring; flat roofs drained by canales; rows of vigas on the ceiling, which often project through the exterior walls and provide structural support for the flat roof; casement windows, typically recessed, with roughly hewn lintels; and stepped-back rooflines that imitate Pueblo architecture. Most pueblo-style homes are one-story structures built around an enclosed courtyard and have a long, narrow portál facing a street or patio. Windows that face the street are protected with ornamental grillwork, and doors to the various rooms open onto the covered portál.

Below: Indian Lodge, Fort Davis, Texas. Built by the Civilian Conservation Corps in the mid-1930s, the original 16-room Pueblo-style lodge has adobe walls a foot-and-a-half thick. The pine crossbeams (vigas) in the rooms were harvested locally, and the ceilings were made from Rio Grande reeds (latillas). See latillas: A Southwest Glossary: Architectural Terms—A to L

Territorial Style
Pueblo style modified with sharper edges, brick coping around rooflines, and white-painted milled-woodwork details such as pedimented lintels on window frames and square portál  posts. The style was associated with New Mexico as early as 1853, when the state became a territory of the United States. The one-story house is typically built around a courtyard and would have a flat roof with parapets and an adobe plaster or earth-toned stucco exterior. Sidelights and vertical windows commonly flank the entry doors. 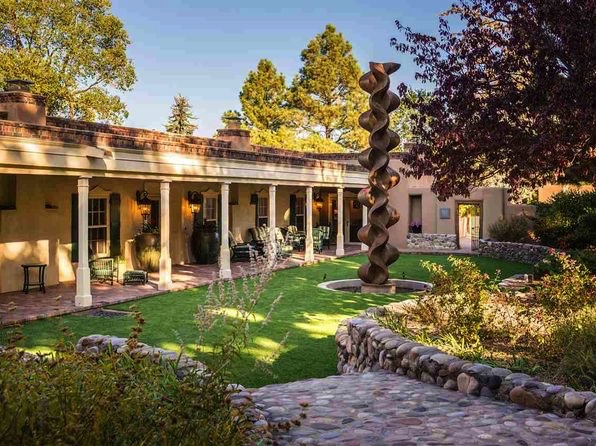 While most portál posts on territorial-style houses are painted white, below is a beautiful turquoise porch in Taos, New Mexico. 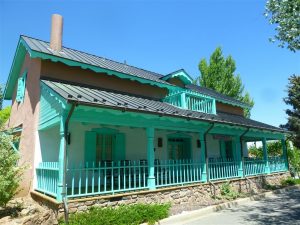