A Final Word on Garlic

Last week I posted my last thoughts on tomatoes. Well, I doubt that those were my last words on tomatoes anymore than I question if this post will be my final word on garlic. Never say never. 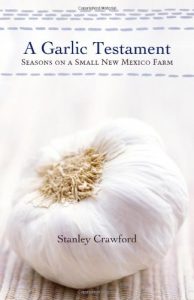 After I read with much interest Stanley Crawford’s The Garlic Papers, I became inquisitive about growing garlic for a living, so I purchased Stan’s book A Garlic Testament eager to read about the growing seasons on a small New Mexico farm. I really hadn’t given much thought to growing garlic. I have a general idea how it grows, but I’ve never farmed garlic for a living nor do I intend to. However, knowledge is a wonderful thing.

A Garlic Testament left me with a deep appreciation for the amount of work and time that goes into growing the root vegetable—not only the tilling of the soil, the planting, the nurturing, and the harvesting, but also the time and work to maintain your farm equipment. And the part I’d find to be the hardest—selling. There’s no skill to giving, but selling is another animal.

While the narrative in Stan’s book hit home in many aspects, certain parts of the testament struck closer to the heart. What is the farm’s worse enemy? You might say weather or weeds. They count, but age is the enemy! Aging can rob you of things you love most and farming is not exempt.

“Farming gave a kind of substance to my life,” said Mr. Crawford, who goes on to say, “Yet time passes. You begin to realize that soon your turn will come to grow old.”

I saw how much my father detested aging. It robbed him of one of life’s greatest pleasures—farming. As he aged he no longer had the strength to trudge behind a rototiller, manhandling it to keep the heavy piece of equipment on track as he furrowed row after row in his once one-acre garden which eventually he downsized by a half. He grew produce in abundance, canned what he wanted, and shared the rest of his bounty with family, friends, and community. And often, he added a chicken or two for those in need.

Another point that hit home in Stan’s narrative was the cost of growing garlic. Per pound it is arguably the most expensive field crop in the produce section of your supermarket. One factor is that 8% to 10% of the harvest must be planted back into the ground to grow next year’s crop. Also, garlic is handled a half-dozen times or more from planting to market. I hadn’t given any thought to either fact, just happy to have found excellent garlic for my cooking needs.

In the chapter titled “Staying Home,” I think Stan said it best. “…staying home is the ecological thing to do. There is no other way to grow your garden…” How true. Reading this chapter reminded me of a friend’s comment a few years back. He asked if I planned to stay in New Mexico for the entire summer to escape the Texas heat.

“I can’t leave until mid to late July,” I informed him. “Only after my vegetable garden is done producing.”

He looked incredulous and replied, “You aren’t serious, are you?”

Who puts that much effort into growing a vegetable garden to desert it when the payoff is weeks or days in the offing? Terrible waste of hard work, and especially some darn good eating.

And what would a post on gardening be if I didn’t mention weeds? One in particular I had never heard of as I don’t ever recall dealing with it—cheatgrass. After some research, and discovering how serious a problem cheatgrass can be to dogs and other wildlife, I made a mental note to keep watch for the weed.

Cheatgrass uses its barb-like seeds to grow anywhere. It can get stuck in your pet’s fur, skin, eyes, nose, ears, or mouth, and can even be found in a pet’s lungs. The weed reminded me of foxtail, which I had seen in our yard in Taos and I immediately disposed of it. Foxtail also has barbed seed heads and they can work their way into any part of an animal causing serious infection.

Toward the end of the book Stan discusses an agricultural cooperative. I guess you could say, in a minuscule way, that our tiny but growing “veggie pact of garden gals” is a mini co-op in the making.

I read with intrigue his chapter titled “The Atom Bomb Ring.” Of course, it brought to mind my book Brainwash, which is set in Taos and Los Alamos. A lot of government conspiracy theories circulate about the labs up on the Hill, but like Stan, I don’t believe that cheatgrass and Los Alamos are in cahoots in any way. From the research I’ve done, cheatgrass doesn’t need government assistance to thrive.

Gotta run! Time to place an order with Stan. I’m running lean on shallots and dangerously low on garlic. And with basil and fresh tomatoes begging to be picked, it’s time to fix a big batch of spaghetti sauce.

Next week: An update on CLON-X, Book Four in the Darcy McClain and Bullet Thriller Series.

← My Last Thoughts On Tomatoes How Important Is Book Editing? →