When I stopped posting to my blog in early 2016, it was never my intention to be gone this long. I even hate to admit how long it has been, but not every year turns out the way you had planned. But I’m back and thrilled to be posting again. So from the three of us, Pat, Darcy, and Bullet, we wish you, our readers and blog subscribers, the best in 2017.

I call 2016 my building block year. The long tradition of naming my years originates with dear family friends Bob and Ginger, who asked back in 1988 for a yearly newsletter rather than a Christmas card. The titles for these newsletters were a summation or a highlight of that particular year. For example: Traipsing Across the Globe, New Kid in Town, Knee-Deep in Gadgets . . . you get the picture.

Sadly, Ginger passed away some years ago, but I continued my tradition with Bob until he passed on as well. This past Thanksgiving I found myself thinking of Bob and Ginger and our annual newsletter. In 2016 I built a foundation for the future of the Darcy McClain and Bullet Thriller Series. As the release of Genocide (book three) approached, I knew I needed to implement a sound marketing plan, but what I needed even more was a good publicist, someone who could assume that responsibility, allowing me to return to what I love best—writing.

Last year started as a footrace and the marathon continued into the summer—designing a new website, brainstorming a comprehensive marketing plan, reviewing multiple edits of Genocide, and revising large sections of Clonx (book four), not to mention working on long, detailed summaries for two new books in the thriller series. When creativity strikes, you need to respond and record. 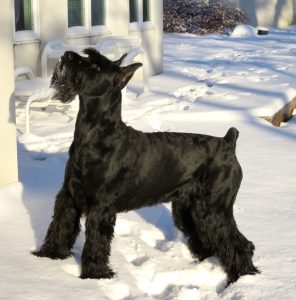 In early August 2016 the unthinkable occurred: our giant schnauzer Kai died of lymphosarcoma at the young age of seven. The pain of his loss overshadowed my desire to press on with the series. I knew I would at some point, but I needed time to grieve and to deal with his sudden passing, and under this shadow the rest of 2016 just slipped away.

The only consolation during this sorrowful period came on October 26, when a friend and fellow giant schnauzer owner paid us a visit and brought along Tonka, the rescue she was fostering. We weren’t ready for another giant, but his owner had died and Tonka needed a forever home. After a five-minute meet and greet, we decided his new home should be with us. 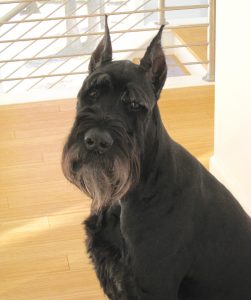 His name certainly suited him. Tonka, in the language of the Lakota people (of the Sioux tribes), means great or large, but we soon grew tired of people calling him Tonka Toy and renamed him in the spirit of the two giants (Shotz and Kai) who had gone before, and whose personalities had shaped the giant in my thriller series. First in fiction and now in real life, Bullet had been rescued.